The U.S. Dollar strengthened against the Euro, Pound and other peers while stock markets were mixed and volatile in the wake of jobs data out of the United States that showed 1,027K jobs were created in the non-farm sector in August, which was less than the 1,200K jobs the market was expecting.

The miss appeared to have spurred some buying of dollars, which is a typical 'risk off' market reaction whereby investors switch from equities into cash in anticipation of a negative stock market reaction to disappointing data.

"The 1.37mn jobs added looks impressive, but leaves the U.S. with a cup half empty in terms of getting back to where we started, with that fraction of the jobs lost in the initial lockdown remaining to be regained. There are still 12mn fewer Americans employed than prior to the pandemic," says Katherine Judge, an economist at CIBC Capital Markets.

However, negative investor sentiment on the headline numbers was countered by a surprise fall in the jobless rate which came in at 8.4%, which is better than the 9.8% reading markets expected.

Furthermore, the miss on the headline non-farm payroll number was not quite sizeable enough to prompt a wholesale sell-off in equities, with the S&P 500 and Dow Jones holding their daily gains but the NASDAQ 100 - which has had a tough week - was seen 1.0% lower.

The Dollar's strength is notable in the Euro-Dollar exchange rate cross which dipped to 1.1813: 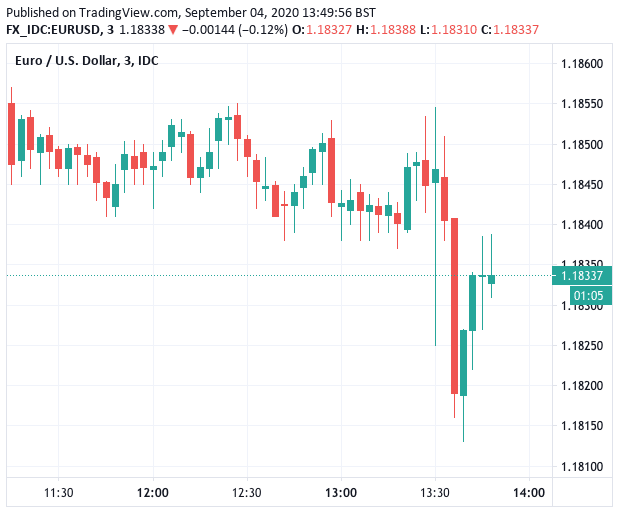 "August’s solid non-farm payrolls report caps off the best week for the U.S. Dollar since June, suggesting that market sentiment on the greenback may finally be improving after a months-long bloodbath," says Ranko Berich, Head of Market Analysis at Monex Europe.

However, looking at the Pound-to-Dollar exchange rate we can see the pair was already in a decisive near-term decline heading into the data release and the Dollar's bid merely cemented the direction of travel: 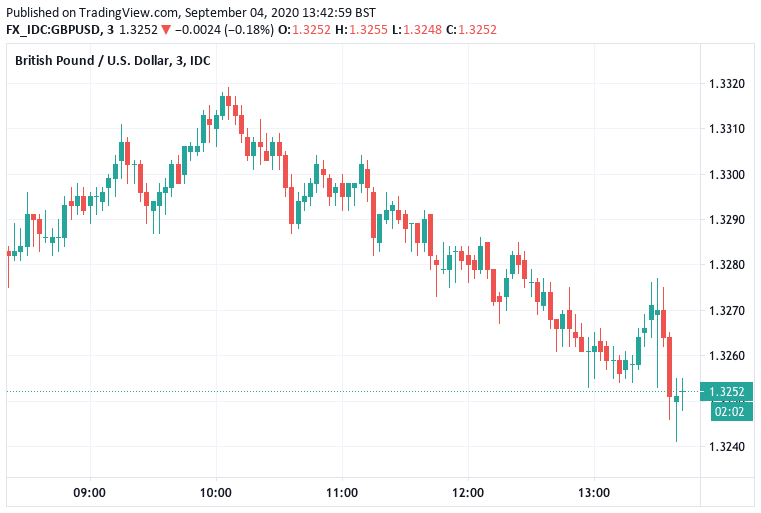 "The broadly positive reading will provide welcome relief to jittery markets as it serves as further evidence of an economic recovery, with the fall in the unemployment rate being the highlight. Although the data is good news for the dollar, which has spent the last few days recovering lost ground against Sterling, expect a muted reaction in GBP/USD as many participants will opt to sit on the sidelines heading into the Labor Day weekend,” says Sam Cooper, Vice President of Market Risk Solutions at Silicon Valley Bank. 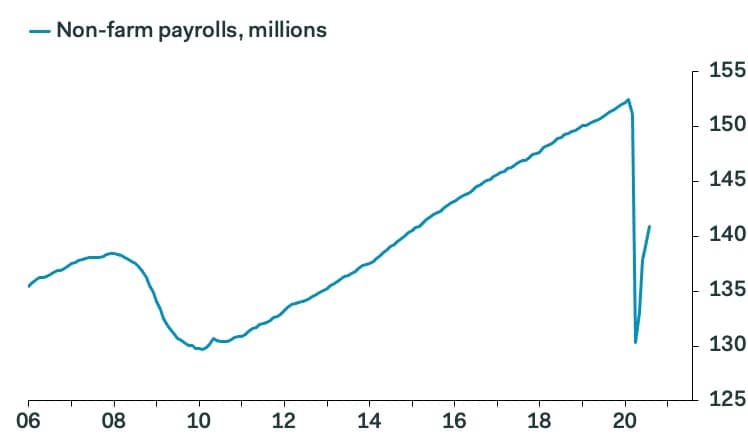 This is the penultimate jobs result before November's Presidental election, which gives it a particular political flavour. President Donald Trump is hoping the economy can recover quickly enough to try and help him avoid the fate of all previous incumbents of the modern era who failed to secure reelection due to a recession having taken place within the two years preceding the vote.

Analysis conducted over recent months has suggested the U.S. Dollar is increasingly concerned with the outcome of the U.S. election to the extent that it might be the single most important driver of the currency at the present time.

According to TD Securities - the Canada based investment bank - the Dollar is now "only focussed on" the vote, "there are clear links between the USD's performance and the expectations for the upcoming election," says Mark McCormick, Global Head of FX Strategy at TD Securities.

Trump - whose policies have coincided with a stronger Dollar - will be buoyed by four consecutive declines in the unemployment rate and unemployment.

Another positive came from the wage element of the report where Average Hourly Earnings grew 4.7% year-on-year in August, which is more than the 4.5% markets had expected.

However, delving into deeper into the data reveals the U.S. jobs market might not be as healthy as the headlines suggest.

Analysis from Pantheon Macroeconomics shows the 0.4% jump in hourly earnings and the 4.7% year-on-year rate, "are meaningless" because the numbers are not mix-adjusted, so the loss of millions of relatively low-paid jobs in the services sector has boosted the reported growth in wages.

"These data don’t change the big picture," says Ian Shepherdson, Chief Economist at Pantheon Macroeconomics in New York. "The slowdown in private sector job growth is ominous but has been clearly flagged by the Homebase data and the slowing in the rate of decline of jobless claims."

Shepherdson explains the unexpected plunge in the unemployment rate reflects a 3.8M jump in the household survey measure of employment, which is both more volatile and much less reliable than the payroll numbers.

"The loss of momentum is consistent with other near-real-time indicators, and we see little chance of a quick re-acceleration. The steep drop in the unemployment rate is a distraction, and in any event it remains extremely high," says Shepherdson. "The need for a further stimulus package remains acute."