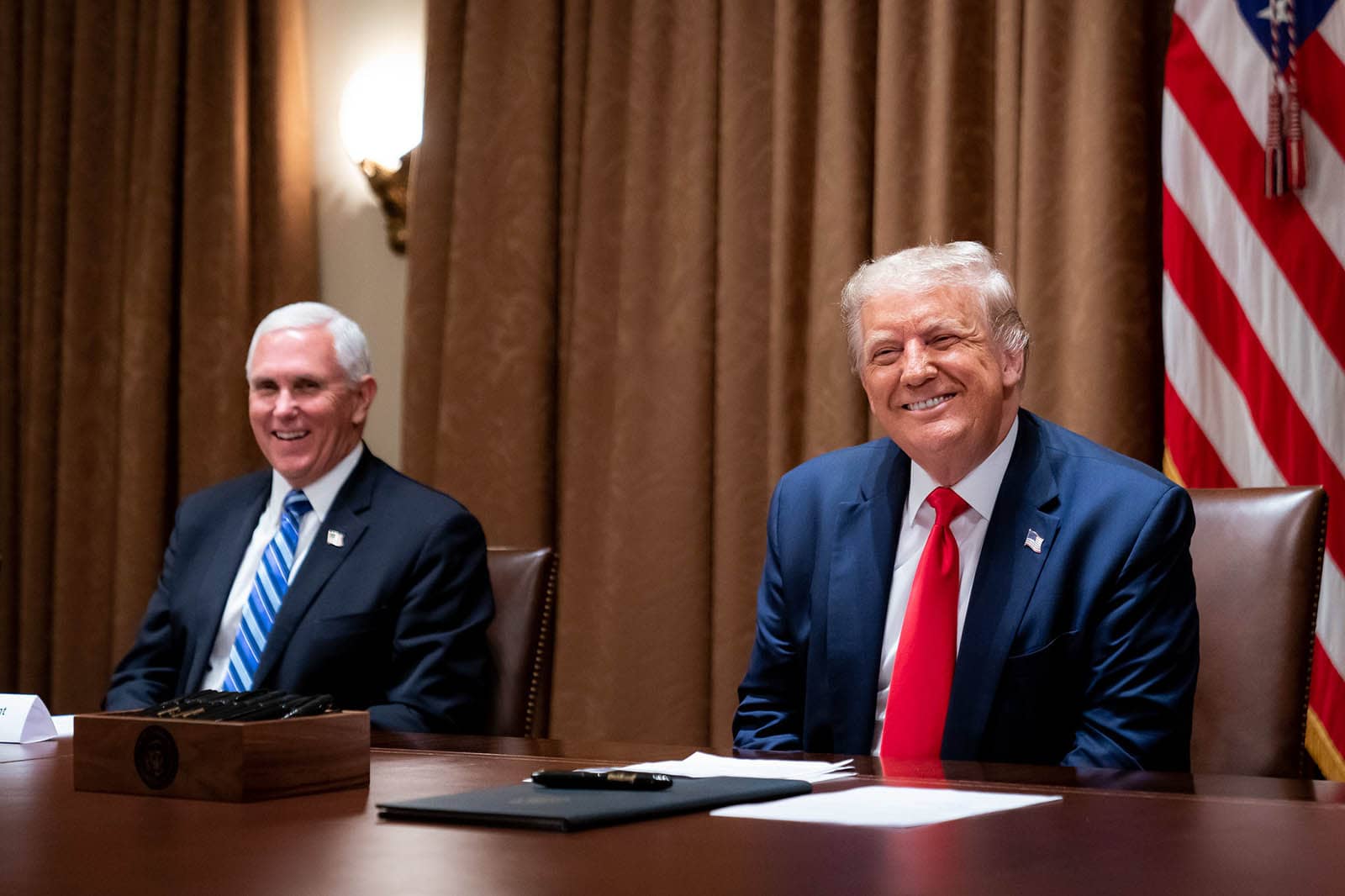 According to TD Securities - the Canada based investment bank - the Dollar is now "only focussed on" the vote, "there are clear links between the USD's performance and the expectations for the upcoming election," says Mark McCormick, Global Head of FX Strategy at TD Securities.

Studies conducted by TD Securities show an increase in correlation between the Dollar and election outcome odds from around 20% in March to about 80% now.

The below chart shows the relationship between the Trump-Biden spread, taken from PredictIt, and the broad U.S. Dollar. 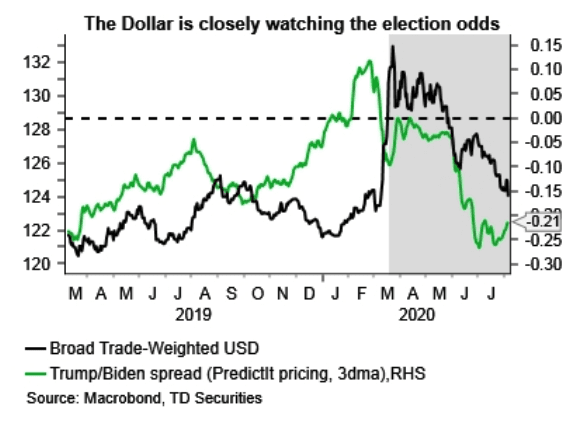 "The USD cares about the election for good reason, reflecting the impact that the Trump presidency has had on global trade policy, geopolitical uncertainty, global markets, and growth," says McCormick.

According to the analyst, a Biden victory would undermine some of the tenants of the #MAGA trade. The most important might be a reduction in economic uncertainty that could benefit the rest of the world (ROW) and undermine U.S. economic outperformance.

As we have noted at Pound Sterling Live over recent weeks, foreign exchange markets are increasingly concerned with the relative performance of the U.S. economy versus the Eurozone, and the rest of the world.

The U.S. economic outperformance of recent years has helped drive Dollar outperformance, but a potential reset courtesy of the covid pandemic has lead investors to question whether this outperformance can be maintained, thereby favouring other currencies at the expense of the Dollar.

The Dollar Index - a broad measure of Dollar performance - has fallen from highs around 103 in March when the covid market meltdown was at its most extreme, to 92.99 at the current time. This corresponds with a rally in the Pound-to-Dollar exchange rate from below 1.15 to levels above 1.31 at the present time, and the Euro-to-Dollar exchange rate from 1.08 to this week's highs at 1.19.

An expectation that a Biden presidency will be less market friendly than that of Trump is contributing to a view that U.S. outperformance is drawing to a close, and with it the Dollar's multi-year up-cycle is turning.

"The argument is that a potential Democratic Presidential victory or even clean-sweep would pave the way for higher U.S. corporate taxes and a greater scrutiny of tech firms that have been heavily responsible for driving U.S. stock market gains. This could see a reversal of U.S. equity outperformance relative to elsewhere, prompting outflows and weakening the USD," says David Bloom, Global Head of FX Research at HSBC.

Biden is expected to preside over a regime of increased corporate regulation, higher taxes and more red tape as social and environmental sustainability is brought back to the fore of U.S. policy, which could blunt the U.S. economy's outperformance advantage.

"The potential for a big reversal in relative performance if 'tech and tax' stocks were to be negatively impacted is no doubt large," says Bloom. "Excluding such stocks would see U.S. profit margins fall much closer to those of European stocks." 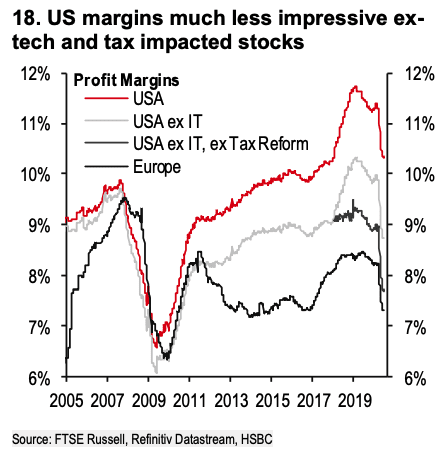 Biden has seen his performance in the polls improve since the onset of the covid-19 crisis and the economic pains it brought, understandable as the rule of thumb in U.S. politics is that presidents get re-elected on strong economies.

Historical evidence shows the incumbent President typically has had an electoral advantage, especially with a strong economy.

Indeed, the only incumbent presidents since the Second World War who have not been re-elected were Gerald Ford, Jimmy Carter, and George Bush Sr, and under all of these, the U.S. economy had experienced a recession in the two years prior to the election.

Owing to the effects of the covid-19 shutdowns, the U.S. economy is seeing the kind of sharp deceleration and labour market deterioration that could put Trump in the same bracket as Ford, Carter and Bush Sr. 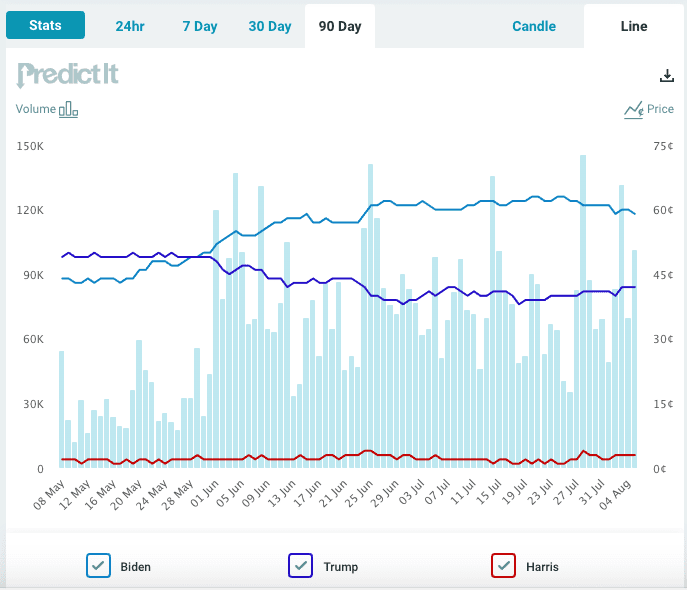 The election is however likely to be closer than the odds reply, particularly if the U.S. economic recovery extends, a vaccine is introduced and as the campaign period enters top gear which presents the potential for game-changing mistakes or events to leave a mark.

If the Dollar is indeed tracking the election to the degree TD Securities believe, then an obvious risk to the downside bet would be that Trump's odds begin to improve. This could well put a lid on recent Dollar weakness and prompt a recovery with pairs like the GBP/USD and EUR/USD retreating from recent multi-month highs.

"This election is likely to be closer than many expect, which gets us back to market pricing. The Biden/Trump regression implies that the USD's trading at a modest discount. It's not huge at 1.6%, but it suggests that any shift in the polls would likely benefit the USD," says McCormick.

"Even a random statistical Trump bump in the polls might be enough to shakeout currency market positioning," adds McCormick.