- But some analysts say market has gone too far and USD may recover.

The Dollar extended losses Tuesday after Federal Reserve (Fed) Chairman Jerome Powell gave investors further grounds to believe the U.S. central bank could cut its interest rate before the year is out.

Powell, who was installed in his role by President Donald Trump in early 2018, said Tuesday the bank would "act as appropriate to sustain the expansion" during an event hosted by the Federal Reserve Bank of Chicago.

The subsequent dip in the Dollar suggests that markets perceived the comment to be a hint that a rate cut could be on the way. Markets have increasingly bet in recent weeks that the Fed will feel compelled to cut rates by year-end.

The prospect of easier monetary policy in the U.S. has also sparked a recovery in global stocks which have been under pressure since early May.

"The speech only devotes one paragraph to the current situation, with the rest focused on Fed's strategy, tools and communications. Still, it was enough to see yields fall after the text was released," says Royce Mendes, an economist at CIBC Capital Markets. "So far, only noted dove St. Louis Fed President Bullard has suggested that the conditions for an ease have been met, but today's commitement from Powell is the strongest indication that his level of concern has increased in recent weeks." 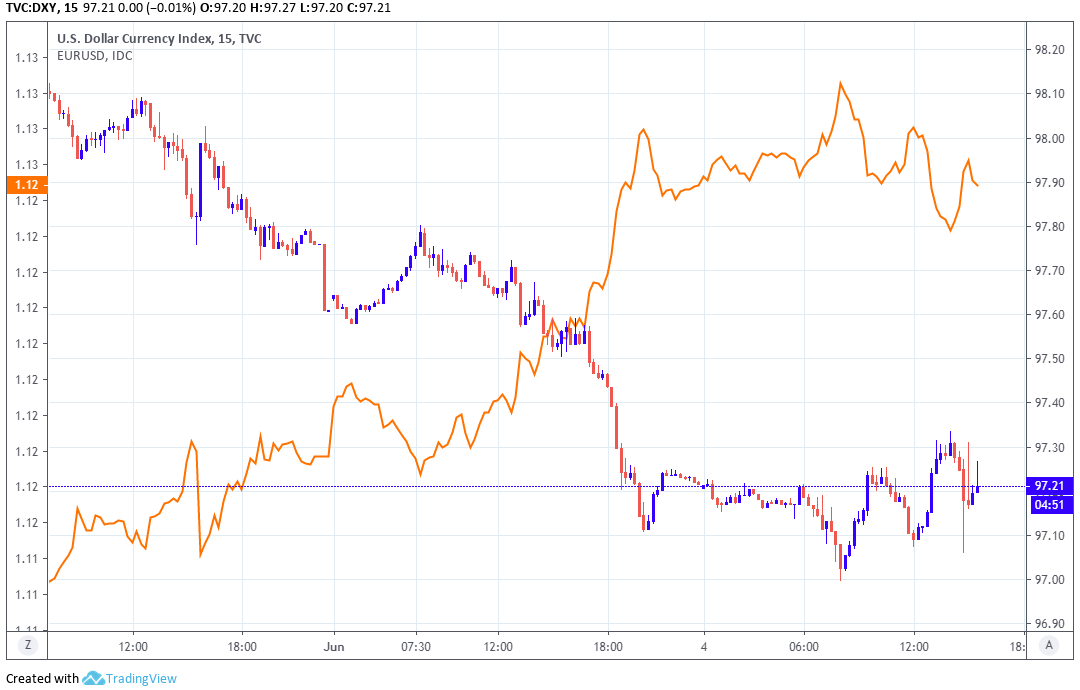 Powell's comment came after Federal-Open-Market-Committee (FOMC) voting member James Bullard said in a Monday address to the Union League Club of Chicago that an escalation of the U.S.-China trade war, a slowing economy and below-target inflation could mean that an interest rate cut becomes appropriate over the coming months.

"The FOMC faces an economy that is expected to grow more slowly going forward, with some risk that the slowdown could be sharper than expected due to ongoing global trade regime uncertainty,” Bullard says. “In addition, both inflation and inflation expectations remain below target, and signals from the Treasury yield curve seem to suggest that the current policy rate setting is inappropriately high...A downward policy rate adjustment may be warranted soon to help re-center inflation and inflation expectations at target and also to provide some insurance in case of a sharper-than-expected slowdown.”

Bullard's comments came with markets already betting on two full interest rate cuts being delivered in 2019, although investors have since begun to bet that an even greater degree of policy 'loosening' is now in the pipeline.

"US bond yields fell after Fed official Bullard called for a rate cut, which also pushed the US dollar lower against other major currencies," says Richard Franulovich at Westpac. "The decline in US 10yr treasury yields accelerated, from 2.13% to 2.06% - the lowest since Sep 2017 and taking it further below the 2.38% Fed funds rate which some consider a harbinger of recession." 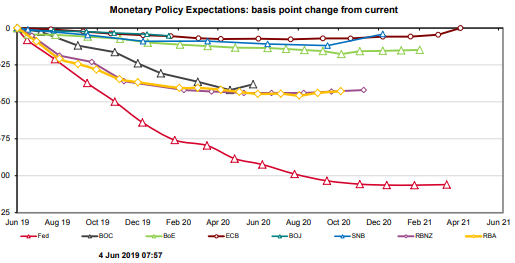 Pricing in the overnight-index-swap market implied a December 11 Federal Funds rate range of 1.75%-to-2% on Monday morning, with the midpoint at 1.86%. That was the market betting on two full rate cuts.

However, by Tuesday the midpoint of the December 11 range had fallen to 1.73%, which implies a Fed Funds rate of 1.6%-to-1.85% and suggests strongly that investors are now beginning to bet on three interest rate cuts for 2019.

Interest rate cuts are used by policymakers to stimulate economic growth and inflation pressures. However, they also tend to see investors driven out of and deterred away from a currency because capital flows mostly move in the direction of the most advantageous or improving returns.

"The US dollar sell off yesterday provides the first clear evidence that it is beginning to weaken in response to building Fed rate cut expectations. Until recently the US dollar had proved resilient to narrowing yield spreads. The intensification of Fed rate cut expectations was triggered by dovish comments from St Louis Fed President Bullard who is voter this year on the FOMC," says Lee Hardman, a currency analyst at MUFG. 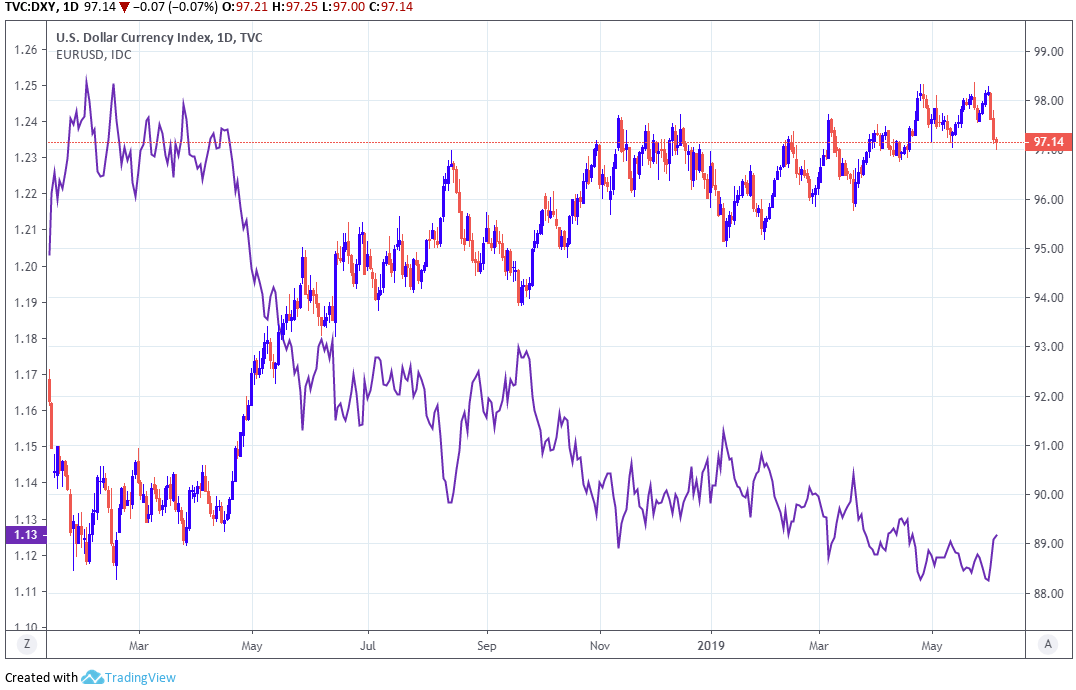 MUFG's Hardman says the decline in bond yields that was precipitated by Bullard's comments should continue to act as a dampener for the Dollar, which has been wounded in recent days by signs that President Donald Trump's trade war with China is now beginning to bite the U.S. economy.

The ISM manufacturing PMI fell 52.1 in May, from 52.8 previously, when financial markets had looked for it to rise to 53.0. The result followed Friday's ISM Chicago PMI, which suggested that activity in America's third largest city surprising on the downside last month.

Analysts have been looking throughout 2019 to see U.S. economic growth slow because the lofty rates of expansion induced last year by President Trump's tax cuts were always going to be nigh on impossible for the economy to overcome without further stimulus.

U.S. GDP growth picked up in the first quarter for the first time in five years, taking the market by surprise, but the industrial sector is increasingly showing signs of coming under strain. Many manufacturing companies are now having to pay 25% tariffs on goods imported from China, which are crimping profits. 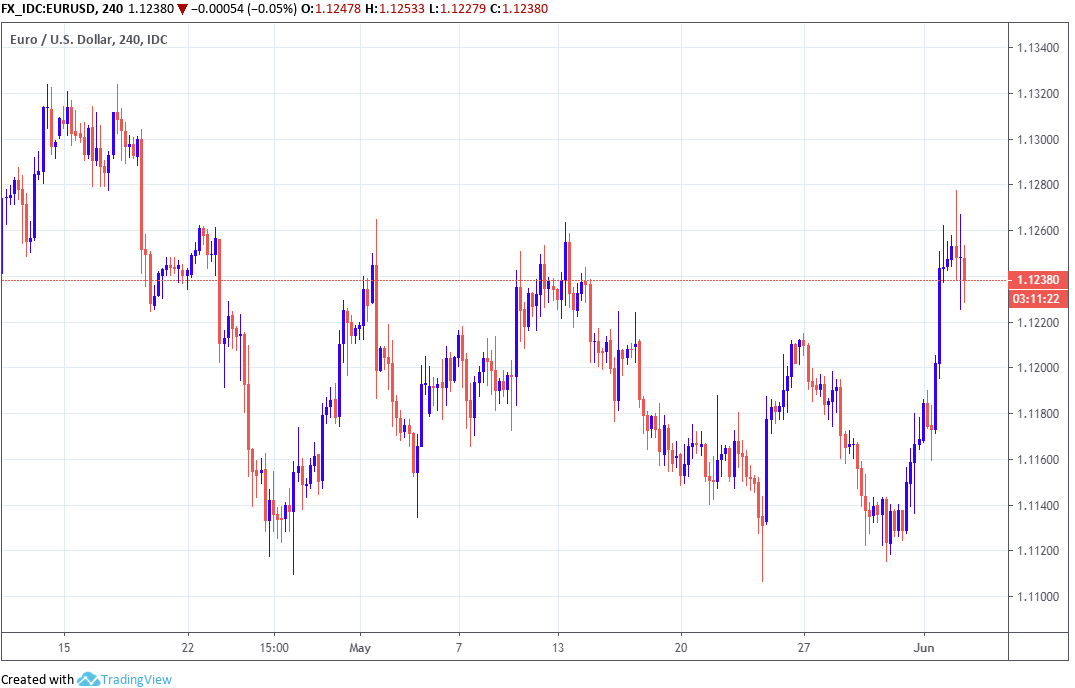 "A surge in expectations regarding the likelihood of Fed easing has weighed on the USD, taking EUR/USD back to levels last seen in the middle of April and pushing the DXY dollar index back down to the 97.00 support area," says Jane Foley, a strategist at Rabobank. "While we have been forecasting an aggressive pace of Fed rate cuts starting in mid-2020, we see risk that the market is currently overreacting and look for the USD to recover some ground near-term."

The Federal Reserve has raised its interest rate nine times since the end of 2015 including on four occasions in 2018, much to the ire of the White House which has been trying to stimulate U.S. economic growth using tax cuts and other fiscal policies. The last rate hike was in December 2018, which left the Fed Funds range at 2.25%-to-2.5%, although the Fed has since said it'll be "patient" before deciding what to do next.

Fed policymakers left rate cut speculators empty-handed in May when minutes of the latest FOMC meeting suggested they thought current below-target levels of inflation will prove "transitory" and that the economy would continue to grow at a "moderate" pace in the quarters ahead.

"Market expectations of Fed rate cuts have risen further following the Fed’s Bullard comments about the need to ease policy in light of the slowing growth and the risk of escalating trade wars. While the USD weakened in response, we note [that] plenty is already priced in (64bp of cuts for this year, and 35bp for 2020 – a frontloaded easing cycle). This makes it more challenging for the Fed to surprise on the dovish side," says Petr Krpata, a strategist at ING. 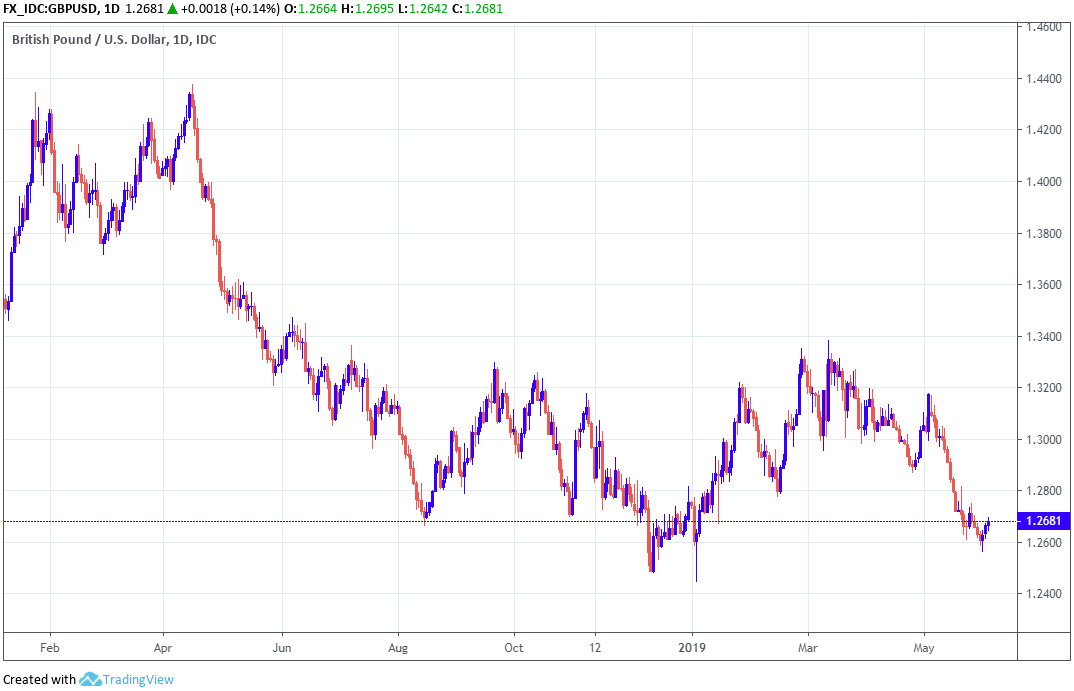 Interest rate decisions are normally only taken in relation to the outlook for consumer price pressures, but inflation is sensitive to economic growth. The U.S. consumer price index came in at 2% for April 2019, the latest data available, while after excluding changes in commoditised food and energy prices inflation was 2.1%.

The headline inflation number is bang on the Federal Reserve's 2% target and the core number slightly above it, although both have been lower during recent months and the Fed's preferred but non-statutory measure of inflation has been below 2% for a while now. The personal consumption expenditures (PCE) price index was 1.5% in April and 1.6% when food and energy items are excluded, which are some of the highest levels seen thus far in 2019.

Existing levels of inflation and the recent move higher could make it difficult for the Fed to justify cutting interest rates anytime soon and some analysts are beginning to suggest the market's punishment of the U.S. Dollar has gone too far in light of an also-dire outlook for interest rates in other areas of the world.

"While expectations of rate cuts from the Fed inevitably counter the dollar’s attraction, we expect it is too soon to be worried about aggressive Fed rate cuts in 2019. In addition, downside potential for the USD over the next year or so is likely to be limited by expectations that other G10 central banks will also be pushed into easing monetary policy conditions in the months ahead," says Rabobank's Foley.