The Dollar was on course for a second consecutive session of losses Monday after the latest Institute for Supply Management (ISM) survey offered further evidence that President Donald Trump's trade war is biting the economy.

The ISM manufacturing PMI fell 52.1 in May, from 52.8 previously, when financial markets had looked for it to rise to 53.0. The result follows Friday's ISM Chicago PMI, which suggested that activity in America's third largest city surprising on the downside last month.

New orders, production output and employment all grew during May, according to the ISM survey, but work backlogs contracted for the first time since 2017. The latter could mean that order inflows are no longer sufficient enough to use up the sector's production capacity.

"The production sub-index fell to its lowest level since August 2016 but a pickup in the new orders index partly offset that weakness, while remaining well below the highs seen in late 2017, and suggesting that there likely won't be a surge in manufacturing production ahead," says Katherine Judge, an economist at CIBC Capital Markets.

The ISM manufacturing PMI index has fallen from 61.3 in August of 2018, which marked a post-crisis high, and from 56.6 in January. U.S. economic activity was always expected to slow from 2018's lofty, tax-cut-induced, highs in 2019 but it's also now being helped along by President Donald Trump's trade war with China.

PMI surveys measure changes in activity by asking respondents to rate conditions for employment, production, new orders, prices, deliveries and inventories. A number above the 50.0 level indicates economic expansion while a number below is consistent with contraction.

Markets care about the data because it is an important indicator of momentum within the economy. And economic growth has direct bearing on consumer price pressures, which dictate where interest rates will go next. Chicago is the third largest city in the U.S.

"The official manufacturing output data for May likely will be much better than the ISM headline suggests, because two unfavorable calendar effects from April will reverse, but the trend will remain soft, and likely will weaken further as the full hit from the latest tariffs work through. The sector can’t thrive when it’s being hit by new taxes at random every few weeks," says Ian Shepherdson, chief U.S. economist at Pantheon Macroeconomics.

The ISM survey comes at a time when investors are already betting the Federal Reserve (Fed) will be forced to cut interest rates before the year is out, although this is yet to meaningfully undermine the Dollar, which was lower on Monday but is still up against many of its G10 rivals for 2019. 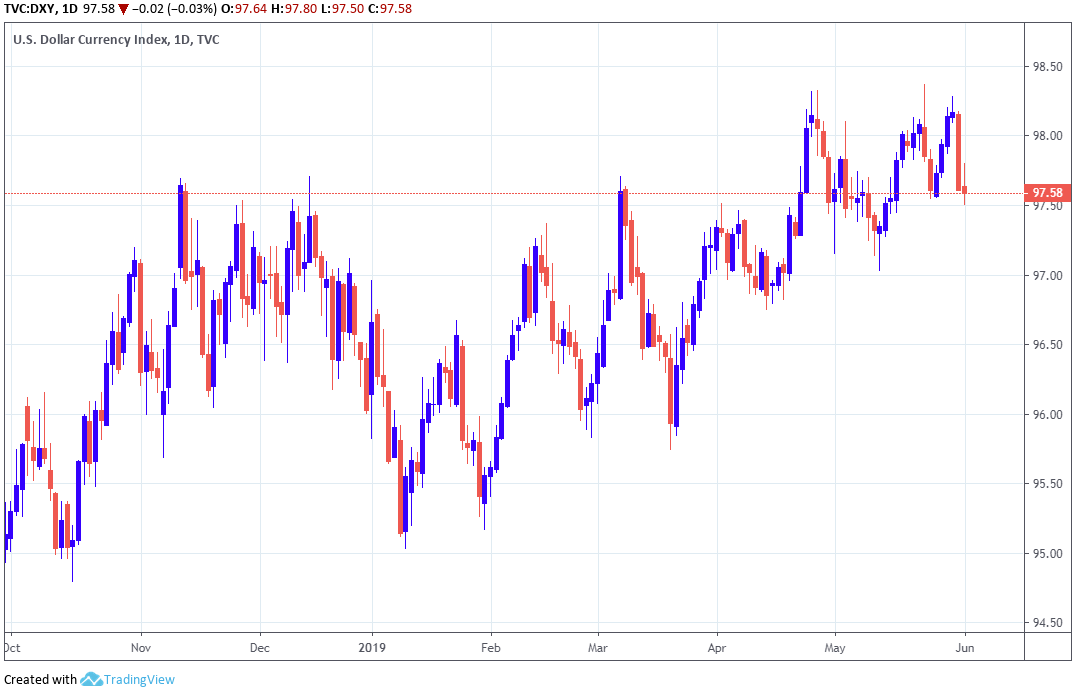 However, the Dollar was lower against all G10 rivals Monday other than the Japanese Yen, which makes up a sizeable portion of the Dollar index. 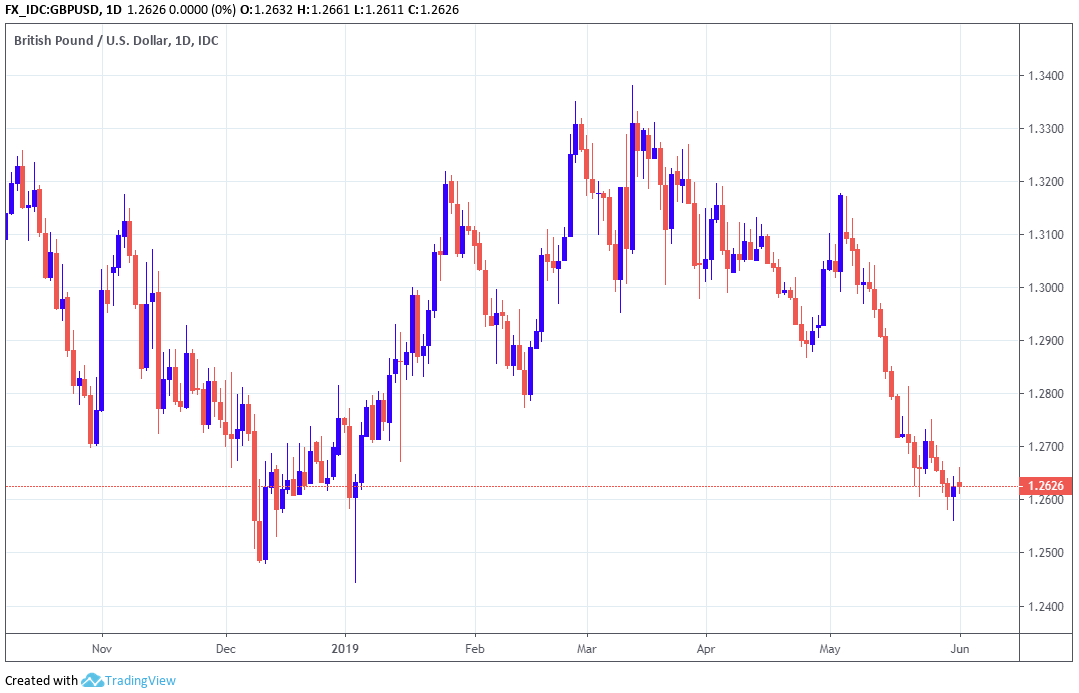 Monday's data is significant because it could be taken as further evidence the U.S. trade war is beginning to bite the economy, which might encourage increased speculation about Federal Reserve rate cuts.

The market is now betting on two full Federal Reserve interest rate cuts being delivered in 2019, when as recently as last Monday market pricing had suggested that investors were still uncertain about the idea of a second cut.

So far 'safe-haven' flows connected to the 'trade war' with China had kept the greenback supported but each time data has suggested the economic conflict is having an impact on the U.S. economy and Federal Reserve outlook the greenback has wobbled.

"The US dollar has continued to grind higher against other major currencies apart from against the safe haven currencies of the yen and Swiss franc. The dollar index has increased modestly for four consecutive months," says Lee Hardman, a currency analyst at MUFG. "Dollar strength will be challenged as US cyclical momentum slows more clearly. We now expect a 25bp Fed rate cut in Q1 2020, with risks this move could come later this year, in Q4."

The trade war between the U.S. and China has escalated dramatically last month and the world's two largest economies are now on the verge of an all-out economic conflict after the White House drew a 'blacklist' from its arsenal of economic weapons and used it against China's Huawei.

Hui Xijin, Editor-in-Chief of China's Global Times and perceived by some in the market as an unofficial spokesperson for the government, said in a social media post Friday that China would retaliate. Soon after the Ministry of Commerce said it's creating a "list of unreliable entities".

The ministry is yet to say which U.S. companies will be added to this list or what awaits those who are eventually featured on it, but the announcement demonstrates an intent by government to match U.S. moves against China.

"The Chinese government has issued its trade white paper. China is going to build its own "unreliable entity list", and investigate why mail is being diverted to the US. The Defense Department also has warned the rest of the world not to cross the line on Taiwan to avoid war. These series of actions are the start of Xi's "long march"," says Iris Pang, an economist at ING Group.