- U.S. GDP growth accelerated in Q1 for the first time in five years.

- Signs of inflation muted, but analysts look to market pricing of Fed.

The Pound-to-Dollar rate rose Friday as the mighty greenback buckled in response to profit-taking in the wake of a blowout first-quarter GDP number, which showed U.S. economic growth accelerating early in the New Year for the first time in five years.

Almost all components of GDP improved during the quarter, with personal consumption expenditures, private inventory investment, exports, government spending and nonresidential fixed asset investment all rising while imports from overseas, which are a subtraction in the calculation of GDP, fell.

"If Q2 is anything like this, the Fed is going to have a tricky summer," says Ian Shepherdson, chief U.S. economist at Pantheon Macroeconomics. "The GDP consensus always looked too low, but the headline is better than our 2.6% forecast too."

This is a notable result not only because the financial markets, as recently as the beginning of April, had anticipated almost no growth at all but also because the first-quarter has historically proven to be a washout for the U.S. economy.

Economic growth had slowed in each first-quarter for the last five years in the U.S., but Friday's data revealed what can only be described as a sharp pickup.

"That was nearly a percent above the consensus expectation, and came despite a tepid 1.2% gain in consumer spending. Despite the impact of the government shutdown, that area was actually a positive for growth in the first quarter. Also, unexpectedly there was an even bigger inventory build than there was in the prior quarter, meaning that stockbuilding contributed 0.65%-pts to growth," says Andrew Grantham, an economist at CIBC Capital Markets.

The Dollar has been bid steadily higher since mid-March going into Friday's GDP release, with the upturn in the currency following the path of upgrades to the Atlanta Federal Reserve estimate of the first-quarter number. 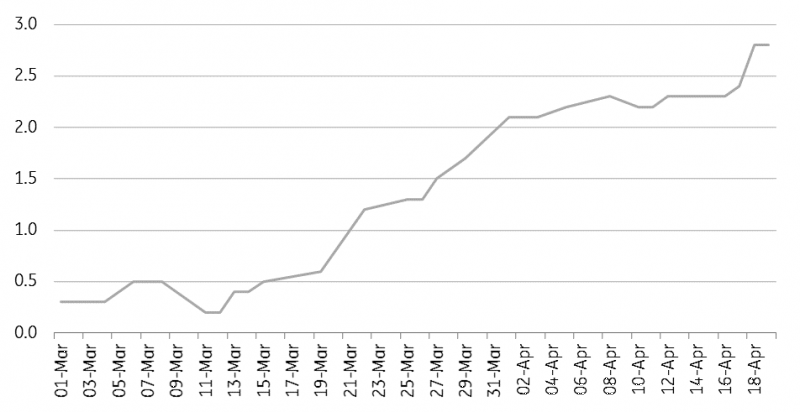 "Both the GDP deflator and core PCE price index were a little below expectations, still indicating that despite solid growth there is little in the way of inflationary pressure. However, even with that these strong growth numbers certainly don't justify current market pricing for a possible cut by the Fed, and as such today's release should be positive for the US$ and negative for fixed income," Grantham adds.

The Bureau of Economic Analysis says the acceleration was the result of a pickup in state and local government spending, more private inventory investment, higher exports and lower imports. The price index for gross domestic purchases and both personal-consumption-expenditures price indices turned downward during the quarter.

Lower price indices could mean the economy was able to groweven faster during the quarter without generating a pickup in inflation, which would be bad news for the Dollar if true because it would lessen the case for further Federal Reserve rate hikes in the short-term, although GDP price indices are not official measures of inflation.

"With the fed funds target range currently not that far from the longer-run neutral rate and inflation pressures benign, there is little pressuring the Fed to move more quickly on rates. Stronger economic growth data does, however, argue against market pricing implying that the next move is more likely to be a cut than a hike," says Nathan Janzen, an economist at RBC Capital Markets.

"A strong report, and remember that Q1 GDP tends to be under-reported; the Cleveland Fed estimated last week that the mean undershoot is about 0.6pp, so conceivably Q1 growth in reality was closer to 4% than 3%. That’s astonishing after the drop in stocks in Q4, demonstrating yet again that the market is not the economy, but also demonstrating, perhaps, the power of the Fed," says Pantheon's Shepherdson.

Investors scrutinise the data to gauge changes in the balance, or imbalance, between growth in the U.S. and that seen elsewhere in the world. Growth differentials are key to how investors' see the interest rate policies of the world's central banks evolving and therefore, which currencies they buy or sell.

The Federal Reserve hiked its interest rate nine times since the end of 2015 and on four occasions last year, as many other central banks sat on their hands, buoying the Dollar against rival currencies. But rate setters moved to the sidelines in January

"The Federal Reserve’s abrupt move to the sidelines in terms of the rate hiking cycle in recent months, though, had more to do with external growth concerns  and muted inflation pressures than domestic economic data," Janzen says.

"Price action appears to be breaking lower which would confirm a top that has been traced out over the past two months. A close below 1.2949 sets up a measured move to the 1.2560 mark," says Bipan Rai, a macro strategist at CIBC Capital Markets. "Our Quantitative model still likes the GBP, so we’ll stay on the sidelines and wait for more confirmation that a break lower is underway."

"DXY has pierced key triple top resistance at 97.71, taking out the 61.8% retracement of the January 2017-February 2018 bear market at 97.87 in the process. The bullish resolution of the ascending triangle pattern favours additional gains toward 98.50 and 99.89 initially, with a 76.4% retracement located just above here at 100.15," says George Davis, chief technical strategist at RBC Capital Markets.

Davis told clients Thursday they should consider betting on a further increase in the index. He says support levels located at 97.71, 97.09 and 96.75 could attract fresh buying interest given the breakout above the top of the triangle pattern. He refers to 96.22 as "pivot for the current uptrend", which means if the Dollar index falls below there then the trade idea will be null and void.

Even before the Fed's January shift, analysts have almost unanimously looked for 2019 to be the end of its rate hiking cycle, and for hopes of an eventual European Central Bank (ECB) interest rate rise to mount and undermine the Dollar in the process. So far though, 2019 has not panned out quite like that.

"It will probably take quite a lot (particularly clearer growth stories in Europe and Asia) to rekindle a global growth story. Until stronger evidence emerges that the Fed is ready to ease, prohibitively high dollar hedging costs should keep USD supported. DXY to 98.80," adds ING's Turner.

Federal Reserve rate setters moved to the sidelines after an economic slowdown in Europe and China, as well as volatility in emerging world financial markets, stoked concerns about the U.S. economic and inflation outlook. Now many say the U.S. economy appears to be slowing and markets have begun to bet the Fed will cut its interest rate before the year is out.

However, thus far the relatively high 2.5% Federal Reserve interest rate and a weak growth performance from other parts of the global economy have left traders reluctant to jettison the Dollar and buy other currencies instead, which is why the greenback has gained 2% in 2019 despite pricing in interest rate derivative markets suggesting strongly that investors anticipate a rate cut from the bank this year.

"Our medium-term contention remains that the USD has peaked and should begin a secular downtrend. However, robust US data, continued underwhelming data in Europe, and positive risk sentiment may keep USD modestly supported in the near-term. The increase in corporate issuance in low-yielding currencies, converted back into higheryielding currencies like USD, may continue to provide support to the USD. DXY broke the previous cycle high of 97.70," says Gek Teng Khoo, a strategist at Morgan Stanley.

Analyst commentary suggests that only a pickup in global economic activity, but especially growth in Europe given the size of the Euro-to-Dollar market, will be enough to sustainably undermine the greenback. Only the Eurozone economy has slowed significantly in the last three quarters and there are a number of threats that could yet see it slow even further. Not least of all President Donald Trump's trade policies.

"To the extent that Europe does not benefit from China's rebound, this would keep EURUSD low and allow the current period of DXY strength to persist," says Hans Redeker, head of FX strategy at Morgan Stanley. "Economic data suggest that our anticipated USD decline may be delayed by a quarter or even longer should the US administration impose tariffs on European autos in May."