- The Fed is now unsure whether it will need to raise rates at all this year.

The Dollar was clobbered with heavy losses overnight and into Thursday's session after the Federal Reserve (Fed) suggested strongly its interest rate hiking cycle that supported the Dollar last year could now be over.

Fed officials did as they were expected to do and held the Federal Funds rate range at between 2.25% and 2.5% on Wednesday, but they also said in the statement accompanying the decision that they aren't yet sure they'll even need to raise rates at all this year.

"The Committee continues to view sustained expansion of economic activity, strong labor market conditions, and inflation near the Committee’s symmetric 2 percent objective as the most likely outcomes," the Federal Open Market Committee says. "The Committee will be patient as it determines what future adjustments to the target range for the federal funds rate may be appropriate to support these outcomes."

Previously the Fed had said that "further gradual increases" in interest rates would be required to prevent inflation from rising meaningfully above the 2% target, which was a staple line that has appeared in almost all policy statements during the last three years or more.

But the Fed abandoned that judgement on Wednesday and is now simply going to be "patient" while it waits for U.S. and global economic developments to dictate whether any further rate rises are going to be necessary over the coming quarters. 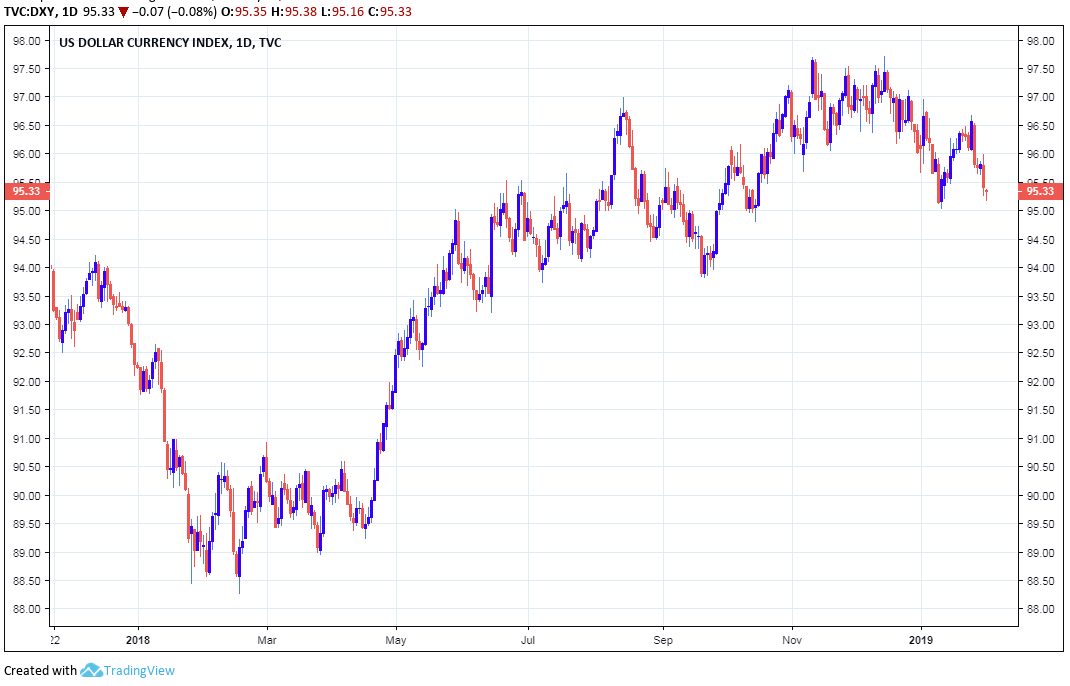 "The dovish shift on rates and the balance sheet formally codifies the recent more cautious messaging from Fed officials into their statement. That will cement the recent trend of USD weakness, though the greenlight for risk appetite will have USD weakness concentrated primarily against the relatively higher yielding currencies," says Richard Franulovich, a strategist at Westpac.

The Fed raised interest rates four times in 2018 and has hiked a total of eight times since the end of 2015, citing mounting inflation pressures in the economy that require tighter monetary policy in order for them to be brought under control.

Those 2018 policy steps came at a time when global growth was slowing and as many other central banks were sitting on their hands as far as interest rates go. That created an incentive for investors to sell other currencies and buy the Dollar last year, driving the Dollar index to a near-5% annual return.

However, the Fed's December and January guidance suggested the bank will be "patient" before hiking this year because it wants time to gauge the trajectory of the global economy and to assess the risk posed to U.S. growth by a possible worldwide economic slowdown.

"Risk assets are dancing in the streets and the dollar's down in the dumps. We may yet get a rate hike in June if the data remain strong, but if what matters is where policy's heading in the medium-term, the FX market would overlook that and sell the dollar anyway," says Kit Juckes, chief FX strategist at Societe Generale.

The Fed's interest rate policy has drawn capital out of, or diverted it away from, other economies during recent quarters and it has also raised the performance hurdle that other financial asset prices must meet in order for investors to be comfortable continuing to hold them.

That's why emerging market currencies were crushed last year and global stock markets have been so volatile, because high interest rates have seen investors hearded toward the Dollar. They've also acted as a headwind for economic growth and seen the value of shares automatically marked down.

Markets had been anticipating between two and three U.S. rate rises this year as recently as early December and they're now betting that the Fed, rather than hike again, will actually begin cutting rates as soon as 2020.

The greenback was a fraction lower against all G10 currencies following the Fed's statement Wednesday and has risen against only the Swedish Krona and Swiss Franc so far in 2019. 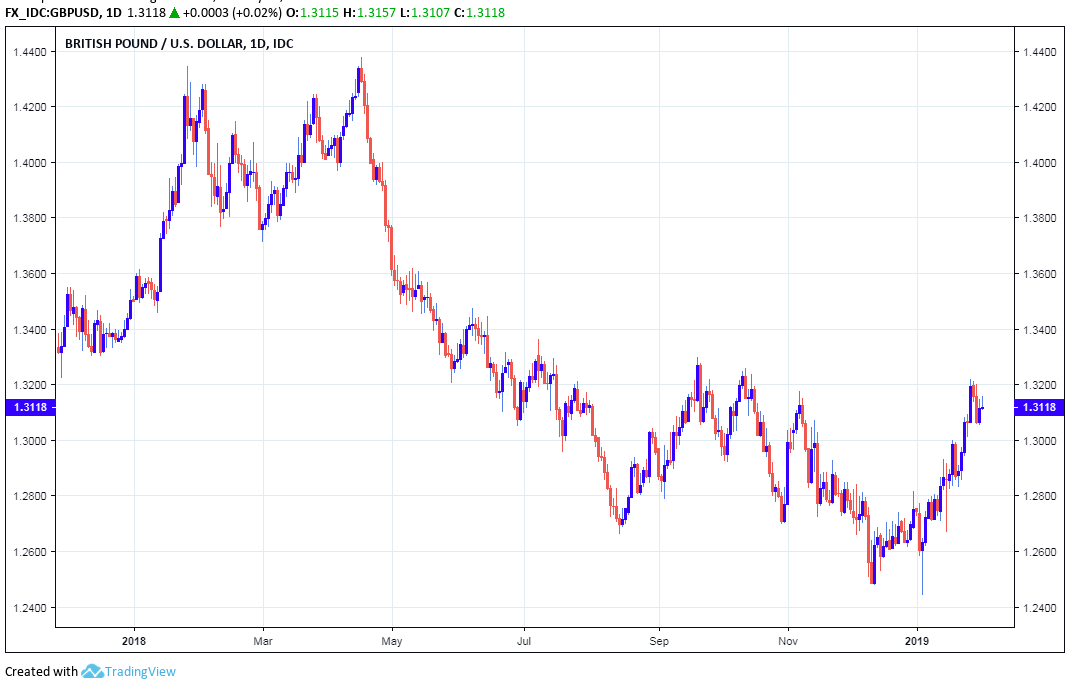 "If January Powell is the real Jay, as opposed to December Powell, then the dollar's well and truly done. The only argument is about whether a dovish Fed will give risk asset and currencies a boost all year, or whether we should stick with a preference for ‘safer' currencies," Juckes adds.

Wednesday's apparent change in the outlook for Federal Reserve policy may be hurting the Dollar this week but what it means for exchange rates going forward will depend as much on what happens in other parts of the world, as it will future happenings in the Fed boardroom.

If the global economy continues to slow during the months ahead then other central banks could also find themselves forced onto the sidelines in the same way the Fed has been, which might mean Wednesday's policy change eventually comes to have a neutral impact on the Dollar.

However, if the Fed's retreat from its agressive interest rate stance eases pressure on other economies, leading to a pick up in global economic growth, then it could eventually be what enables the likes of the European Central Bank (ECB) to begin raising their interest rates.

That latter outcome would almost certainly be bad for the greenback and positive for almost all other G10 currencies stood next to the U.S. unit.

"The global economy (presumably trade wars, China & Brexit) and financial developments (presumably the S&P sell-off in December) were used to justify the switch to a patient and seemingly symmetric bias in policy rates. We had thought that the dollar would top out this year once it became clear that Fedrates had peaked and the dovish shift in the Fed will support that view. Certainly the bar for further tightening looks a lot higher now," says Chris Turner, global head of currency strategy at ING Group.

Turner says the Dollar's en vogue moment last year and the "under-invested position" held by lots of fund managers at the moment mean investors are likely to continue chasing under-valued "high yield" currencies in the months ahead. This means the Australian and New Zealand Dollars could prove popular, as well as the Brazillian Real.

"They will do this until they see clear signs of a re-escalation in trade tensions (US tariffs on auto imports could be a story mid February) or there are other signs of a hard landing. This then should mainly be a story of USD weakness versus high yield/EM, while EUR and JPY will probably lag," Turner writes, in a note to clients Thursday. 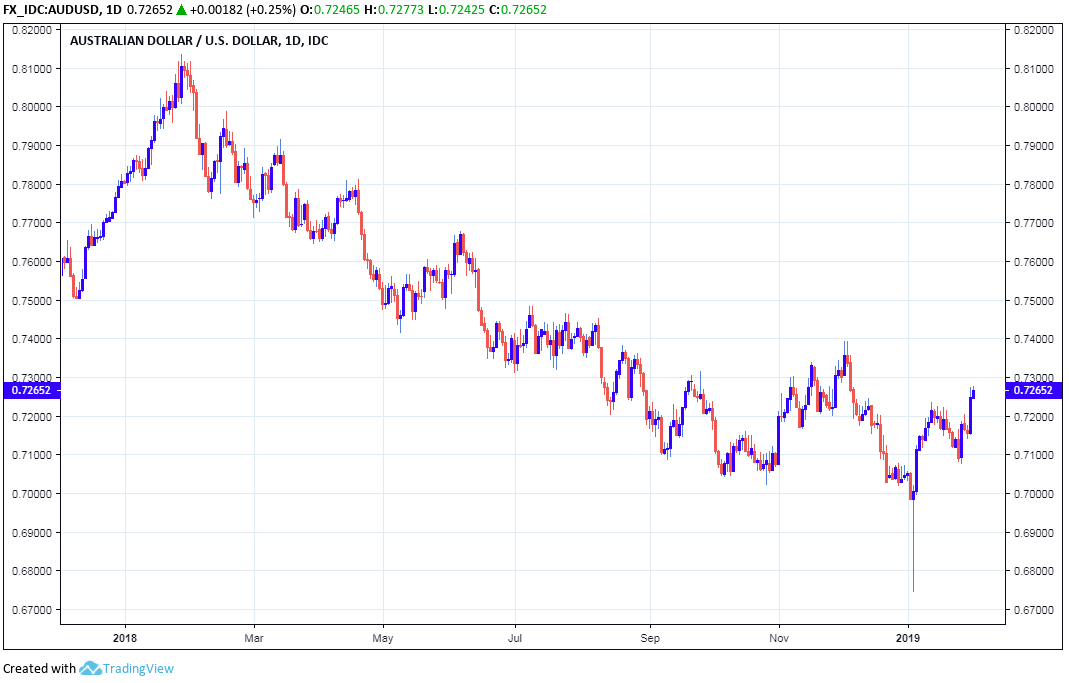