The Pound has rallied sharply against the New Zealand Dollar over recent days and whether these gains are held, built upon or reversed could well rest with the nature of Wednesday's Reserve Bank of New Zealand (RBNZ) rate decision.

The RBNZ is expected by markets to hike by a further 50 basis points, but analysts and market pricing suggests the central bank is close to the end of its hiking cycle.

This could help explain the New Zealand Dollar's recent underperformance against currencies belonging to those central banks that have substantially more hikes to deliver over coming months.

The Pound is one of these: the Pound to New Zealand Dollar exchange rate (GBP/NZD) rose 5.5% last week, taking the pair to its highest level since February at 1.9966.

The gains mean the slump following the UK's mini budget were full reversed and then added to, suggesting a degree of broader Australian Dollar underperformance.

The Pound rallied against the Kiwi and other majors on Monday after Chancellor Kwasi Kwarteng announced a controversial element to that budget - the abolition of the 45p income tax threshold - would be removed. The market's concerns were not so much about the cost of the tax cut, rather the government's credibility in delivering unannounced tax cuts.

The removal of the limit could allow Sterling calmer waters and put the emphasis in GBP/NZD on developments in Australia.

GBP/NZD rose to 1.9795 at the time of writing, taking bank account NZ Dollar payment rates to around 1.9240 and rates offered at independent payment providers to around 1.9740. 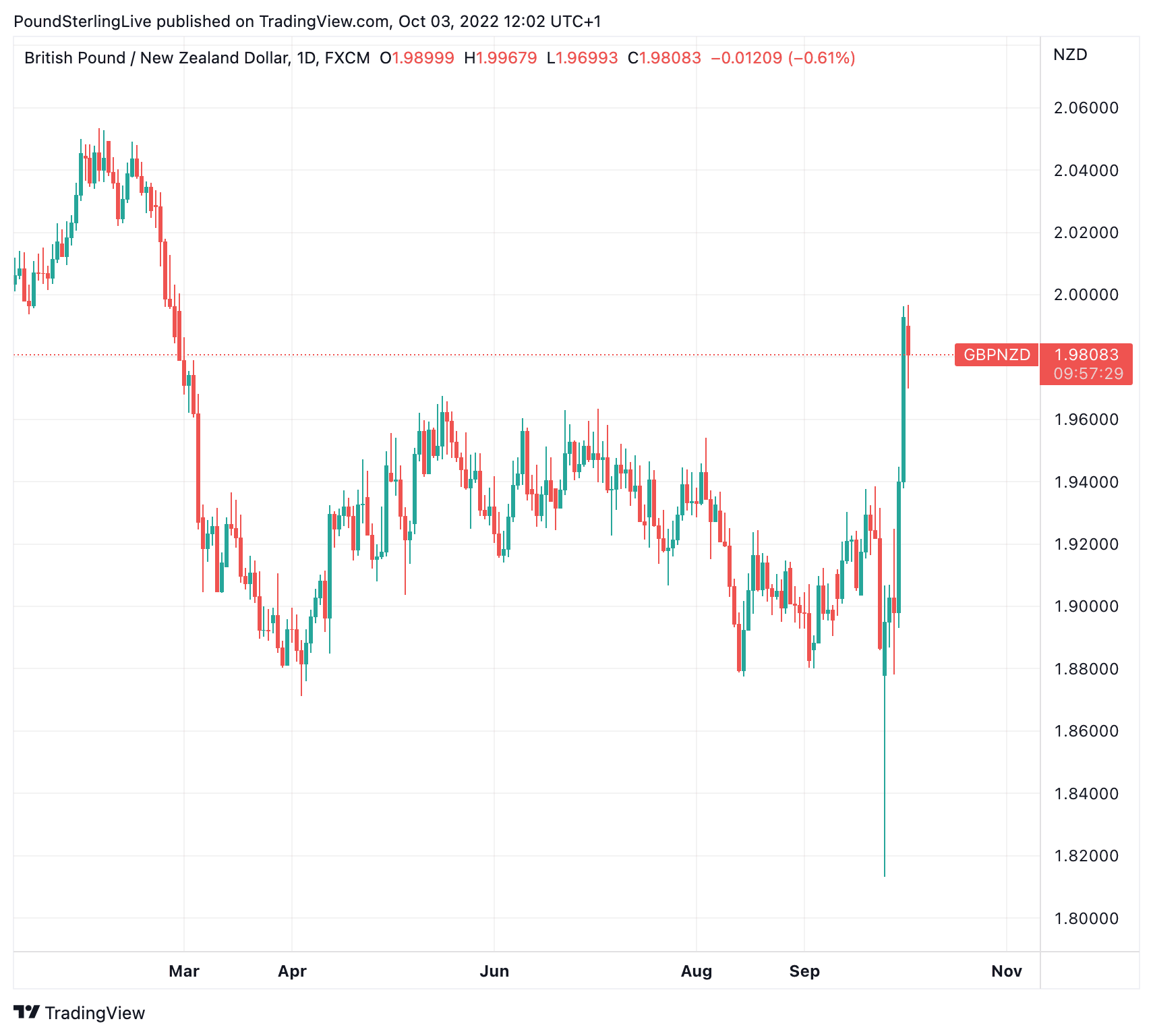 For the New Zealand Dollar to defend current levels the RBNZ must deliver a 50bp hike and meet market expectations for the scale of future hikes, anything less would represent a major 'dovish' outcome and weigh on the currency.

"For now, most central banks are rapidly tightening monetary policy and we expect the RBNZ will lift rates another 50bps this week," says ANZ, in a regular weekly research and strategy note.

Currency analysts at ANZ do however acknowledge the New Zealand Dollar "has performed poorly on crosses".

Economist Chris Tennent-Brown at ASB says events since the RBNZ's previous meeting have been near enough in line with the RBNZ’s outlook to have the RBNZ stick to its least-regrets stance of moving swiftly.

"Beyond October, we expect a further 50bp increase in November and a final 25bp lift in February. Market pricing is for an even higher peak than the 4.25% we are forecasting, which is appropriate given the skew of risks," says Tennent-Brown.

Economists at Westpac have revised up their forecast of how high the RBNZ's base interest rate will need to go in the Reserve Bank of New Zealand’s battle against inflation.

Theynow expect a peak of 4.5%, compared to their previous forecast of 4%.

They expect the RBNZ to reach this point with a 50 basis point hike at next Wednesday’s review, followed by another 50 basis points at each of the next two reviews in November and February.

This would meet the market's expectations and therefore, if delivered, be supportive of the New Zealand Dollar.

Nevertheless, Satish Ranchhod, Senior Economist at Westpac, says signs of cooling demand that the RBNZ has been looking for have started to emerge, and the household sector is bearing most of the brunt of the adjustment.

House prices have continued to soften in the face of higher mortgage rates and are now down around 9% from their peak last November.

"In addition to the lower starting point, we now expect a later and more subdued recovery in the New Zealand dollar," says Ranched.

Westpac expects the NZD to remain below 0.60 against the USD through to the middle of next year, only rising to 0.67 by 2024.