The Pound to New Zealand Dollar (GBP/NZD) has this week put in a truly spectacular performance.

On Monday, GBP/NZD plumbed its lowest levels since 2018 when it fell to 1.8133 amidst a broader 'flash crash' in the Pound, but fast forward to Friday and it is at 1.9705, its highest since March.

In fact the pair is close to recouping half of the sharp decline experienced in the wake of Russia's invasion of Ukraine: 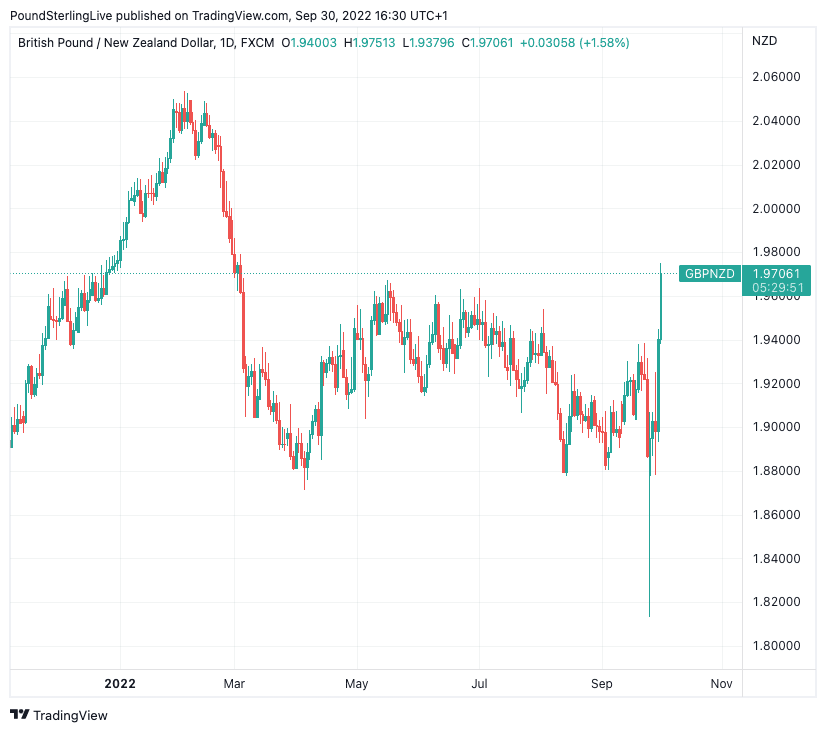 Gains come amidst a strong rebound in the British Pound which has been subject to significant volatility over recent days.

The source of the volatility are UK and global bond markets where a significant shift is underway as central banks squeeze interest rates higher and drain liquidity from the global financial system.

It is into this environment that the new government of Liz Truss dropped a significant tax cutting agenda, which immediately spooked wary debt markets: asking investors to fund tax cuts as the cost of funding becomes increasingly expensive is bound to cause stresses.

"The strong message from markets is that credibility matters, and this is no time for unorthodox fiscal policy," says Kjetil Martinsen, Chief Economist at Swedbank.

The Pound plunged amidst the shock to confidence.

But the recovery since Monday suggests the markets might have over reacted, after all, the most significant chunk of those tax cuts (cancellation of corporation tax, reversal of March's National Insurance hike) were known weeks ago given it is something Truss campaigned on.

Aiding the recovery was the Bank of England's decision to stabilise long-term bond markets by buying bonds, thereby decapitating the surge in yields and calming the market.

The return of confidence aided the Pound.

But what of the New Zealand Dollar? Why is it the biggest loser against Sterling?

Next week sees the Reserve Bank of New Zealand (RBNZ) raise interest rates again, but there are suggestions it is reaching the end of its hiking cycle.

Money markets now imply a further 100 basis points of hikes over the remainder of the year, meaning two more 50bps hikes are likely before a pause.

Meanwhile, the Bank of England and other major central banks have much work to do, with 233bps of hikes expected over the remainder of the year, meaning the potential for further yield support for the Pound going forward.

So as the NZD sees its yield support channel dry up, others like the GBP, are exposed to increasing yields.

If the RBNZ surprises with a more 'hawkish' guidance, i.e. that more hikes are needed as inflation is proving unexpectedly sticky, the New Zealand Dollar could find some relief.

Indeed, given then scale of the recent moves some mean reversion in GBP/NZD becomes highly likely.

So while GBP/NZD has surged, next week could see the restoration of calmer conditions at more familiar levels.