The British Pound fell sharply on an announcement by the Bank of England it would intervene in the bond markets, but an eventual recovery through the day suggests markets are largely welcoming of the move taken by the central bank to settle bond markets.

In a surprise statement the Bank said it would buy long-dated UK bonds, to cap their yields.

The intervention confirms the Bank had become increasingly concerned about volatility in the gilt markets where yields have surged, in turn pushing rates on mortgage and other lending products higher.

Numerous reports suggest action was taken after UK pension funds were said to be in distress following the sharp moves.

"The Bank will carry out temporary purchases of long-dated UK government bonds from 28 September. The purpose of these purchases will be to restore orderly market conditions. The purchases will be carried out on whatever scale is necessary to effect this outcome," said the Bank.

The programme is open ended and without limit, suggesting a 'whatever it takes' attempt from the Bank.

Talk in financial circles is that the targetting of long-term bond yields is to shore up pension funds that rely on 30-year bond yields. Market dislocations following the recent surge in yields was apparently putting some funds in jeopardy of going under.

The Pound to Euro exchange rate at 1.1163, taking payment rates on typical bank accounts to ~1.0940 and the rate at independent payment providers to ~1.1130.

The Pound to Dollar exchange rate is at 1.0750, taking the rate offered on typical bank accounts to ~1.0536 and the rate at independent payment providers to ~1.0719.

As can be seen in the below the has been some notable volatility on the announcement and by the time of this article's update towards the London close the Pound is up against the Dollar on the day and close to flat against the Euro: 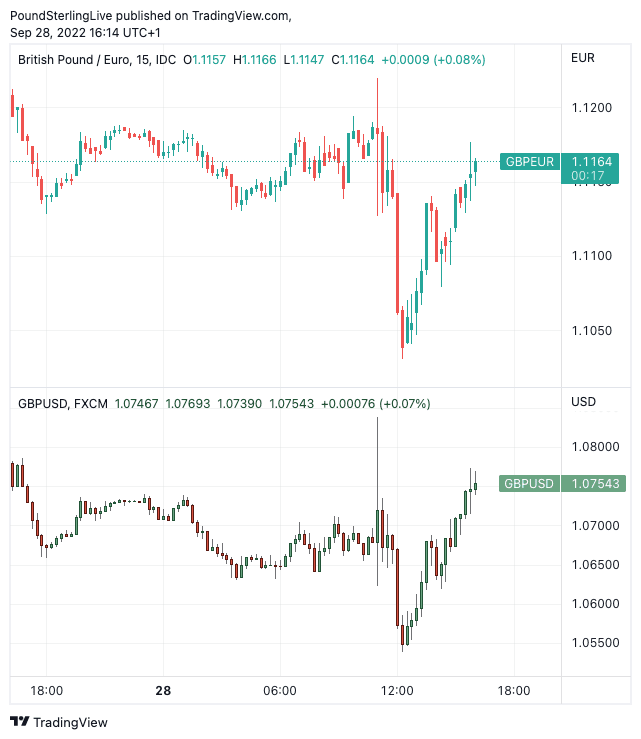 The Bank won't be expanding its balance sheet to fund the bond purchases, instead it will use reserves, meaning this is not strictly the restart of quantitative easing.

Is this is a game changer for UK debt markets, and what does it mean for the Pound?

UK gilt yields have surged as investors demand greater compensation for investing in UK government debt, following a series of unfunded spending pledges and tax cuts from the government.

The below shows the yield on the UK's ten-year gilt, rising ahead of the sudden drop following the late-morning announcement: 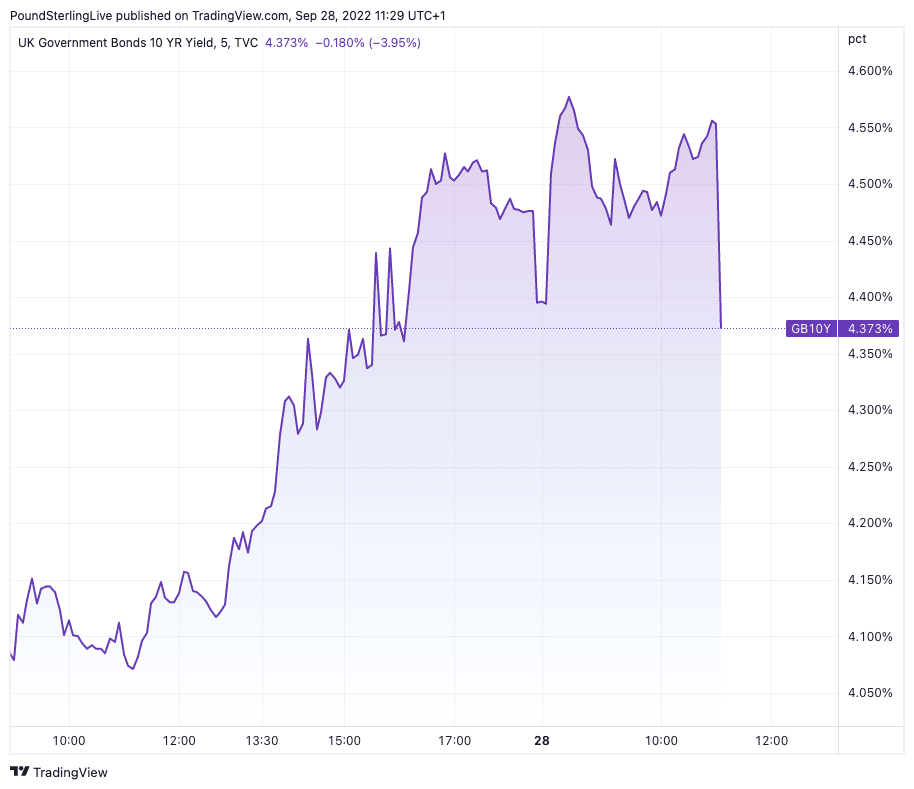 By acting as a backstop to the bond market the Bank of England is signalling it won't let gilts go into a free fall.

Had pension funds gone bust as a result of rising yields the UK would be facing nothing short of a financial armageddon. Therefore, the Bank's actions minimise the risk of a full-blown Sterling asset crisis.

And this can only be supportive of the Pound.

BUT, the buying of bonds by a central bank is typically negative for a currency in that it supresses yields.

Therefore, it could be the new measures are negative for the currency.

The Bank's decision could also be interpreted as a sign of panic and therefore could deepen investor disilusionment towards the UK government, which is also negative for the Pound.

These are unprecedented times for sure.

Those looking to protect their currency payments could consider locking in current rates or setting orders at their ideal levels to better time the market, more information here.

Don't Fight the Bank of England

To those questioning whether the Bank of England can succeed in its latest quest, the answer is yes.

"The BoE is the ultimate backer of sterling-denominated paper. Betting against its ability to fix the market disorder – at least in the short term – is futile, in our view," says Kallum Pickering, Senior Economist at Berenberg Bank.

The UK is Fiscally Sound

Pickering says the current crisis is more a question of credibility than fiscal policy and therefore a u-turn by the government is warranted.

"While the government’s decision to announce tax cuts that will add to public debt at a time when inflation is soaring may be misguided – especially against the backdrop of a severe bear market – UK fundamentals still suggest that the country can afford the extra borrowing," says Pickering.

In a note released following the Bank of England's decision, Pickering says the UK has the second lowest debt-to-GDP ratio in the G7 and the longest average debt maturity in the OECD.

He points out the Office for Budget Responsibility's latest UK fiscal outlook from March – which does not include the latest government tax plans – forecast the UK would have a cyclically-adjusted fiscal deficit of 1.3% of GDP by 2024 and no cyclically-adjusted primary deficit.

"Note that the ongoing recession would not change these structural numbers significantly once the economy has fully recovered," says Pickering.

"Even with higher borrowing costs to push up the overall deficit, a 1.5% primary deficit would not threaten UK debt sustainability," he adds.

Therefore, this appears to be a credibility crisis more than anything.

To remedy the situation the government would need to reverse its fiscal announcements, or delay them.

"Short of reversing or delaying some of his tax plans, his main task will be to come up with sensible spending plans which – when factored into the OBR’s model alongside the tax cuts in the Growth Plan – show that borrowing and debt will not balloon under his watch," says Pickering.

"At that point, markets may be ready to pay more attention to the positive elements of Trussonomics such as supply-side reform and pro-growth tax adjustments," he adds.