The British Pound suffered significant declines during the Monday Asian session that added to Friday's massive selloff, ensuring record lows against the Dollar and a move below 1.10 against the Euro.

The falls happened earlier in the Asian session, notorious for low liquidity levels, meaning it resembled something of a 'flash crash'.

Key will be how the Pound reacts to the start of European equity and debt trade at 8:00 BST: is the flash crash bought into as investors reckon the currency has 'adjusted' enough, or does panic set in?

The markets are selling the Pound as they bet the UK government will be unable to finance its debt burden at a time the Bank of England refuses to raise interest rates to the extent the market demands.

The falling Pound comes alongside rising debt costs in the UK: yields on UK bonds have risen sharply as investors sell these bonds.

The selloff in both the currency and bonds follows the announcement by the UK government it would cut taxes at a time when it has significantly boosted spending to cap energy bills for households and businesses.

Economists suggest this combination means the government will inevitably be unable to borrow the amounts of money required to meet their objectives.

"Initial market reaction has been negative across a range of assets, reflecting concerns about the lack of a credible long-term strategy for the public finances," says Andrew Goodwin, Chief UK Economist at Oxford Economics. 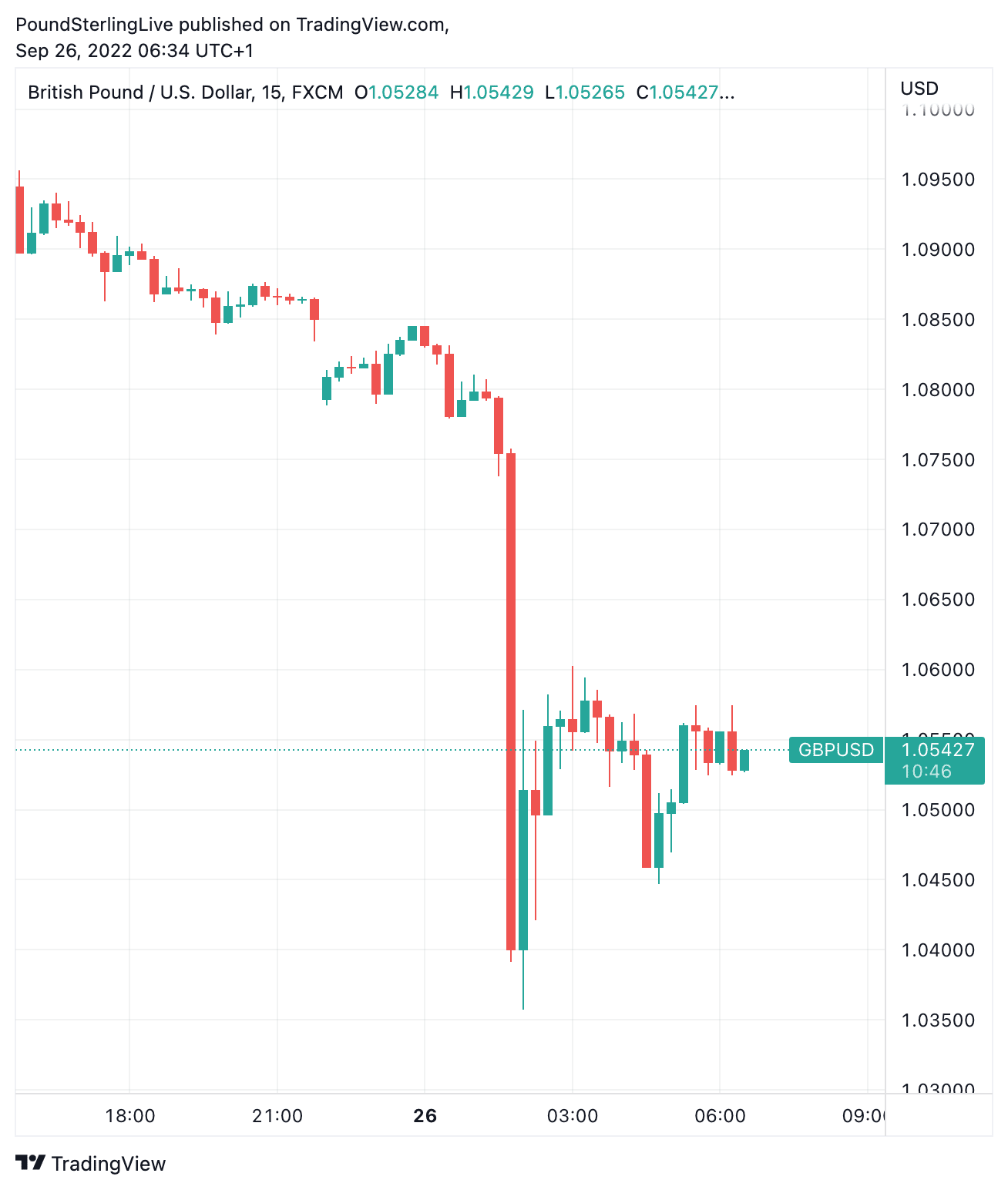 Tatjana Punhan, Deputy Chief Investment Officer at Tobam, says the Bank of England would likely have to intervene before their next official policy meeting, pencilled for November.

If they don't, she suggested they "should lose their job".

The Bank of England has long been accused of being 'behind the curve' in fighting inflation and taking action to defend the currency.

This has in turn meant the currency has had to adjust lower to entice investors into UK assets.

This is the adjustment underway.

The Pound to Euro exchange rate is down 2.0% Monday at 1.0959, adding to Friday's 2.12% loss. Those with currency payment requirements should consider locking in current rates or setting purchase orders at their desired rates, more information can be found here.

"We think a significant metamorphosis is underway in how markets look at GBP. What has become abundantly clear to us has been how GBP has continued to drift away from the set of core G10 currencies and towards the peripheral end of the spectrum," says Kamal Sharma, FX Strategist at Bank of America.

Martin Malone, Chief Economist at Auriel, says much of the blame for Sterling's decline lands at the door of the Bank of England.

The Bank of England "is not in the game at all," said Malone in a Bloomberg interview Monday.

He said the Bank of England made "a huge mistake on Thursday" by only opting for a 50bp hike, when the Federal Reserve had gone 75 basis points just hours before.

In short, the Bank continues to be 'out hiked' by the Fed, and indeed, by most other central banks. But he says the Bank will however have to wait until November to hike, saying an inter-meeting hike would be coming from a position of weakness.

Malone says the government's strategy of trying to stimulate growth by its fiscal policy changes is actually "a positive one".

The sharp declines have lead some to speculate whether a 'Sterling crisis' is evolving.

"Though the market reaction has been negative, we think it's unlikely that the government's approach will cause sterling to collapse or create problems in selling gilts," says Goodwin.

Paul Krugman, a Nobel Laureat, with ample experience in currency crises, has addressed the talk about a looming Sterling crisis:

"I'm supposed to know something about currency crises - I did invent the academic field! And as far as I know there are two ways a country with a floating exchange rate can have a currency crisis, neither of which seems to apply to the UK," says Krugman.

"Since the 1990s, most currency crises have involved balance sheet effects: a country (either public or private sector, or both) has large external liabilities in foreign currency. In that case depreciation worsens balance sheets, creating a self-reinforcing downward spiral," he explains.

"While the UK has a lot of external liabilities, they're overwhelmingly sterling-denominated; the UK also has external assets, largely direct investment

"The result is that sterling depreciation actually *improves* Britain's net international investment position (the same thing happens to the US). So a balance-sheet currency crisis story doesn't seem to make sense

"The other way you can have a currency crisis is if markets believe that you can't or won't service your public debt, and will monetize it instead; this was the story behind the 1926 franc crisis and, I think, the 1976 sterling crisis (which needs revisiting) 7

"But the Bank of England is independent these days, and unlikely to monetize debt. And despite everything, UK debt isn't *that* high by long-run standards

"At a guess, the moron risk premium has now been priced in. I guess I don't see the mechanism for a continuing sterling crisis."