New Zealand's Dollar broke resoundingly below a notable level of technical support around 0.60 against the U.S. Dollar early this week and had by Wednesday given up the 0.59 handle, seemingly leaving the NZD/USD exchange rate vulnerable to further declines.

"We’ve been talking about the potential for USD strength for some time, and it’s now here with a vengeance; while we may see a few wobbles, the USD’s twin safe haven/high rates appeal is hard to deny despite us seeing fair value in the NZD well into the 0.60s," says David Croy, a strategist at ANZ.

"Technically, last night’s fall puts the NZD in a precarious spot; a break below 0.5825 will put it in “clear air” all the way down to the 2020 low of 0.5470," Croy and colleagues wrote in a Wednesday research note.

This week's losses built amid choppy trading in risky assets like stocks and some commodities, which appeared to benefit the U.S. Dollar ahead of an imminent Wednesday interest rate decision from the Federal Reserve (Fed) that will be an important influence on the outlook for most currencies. 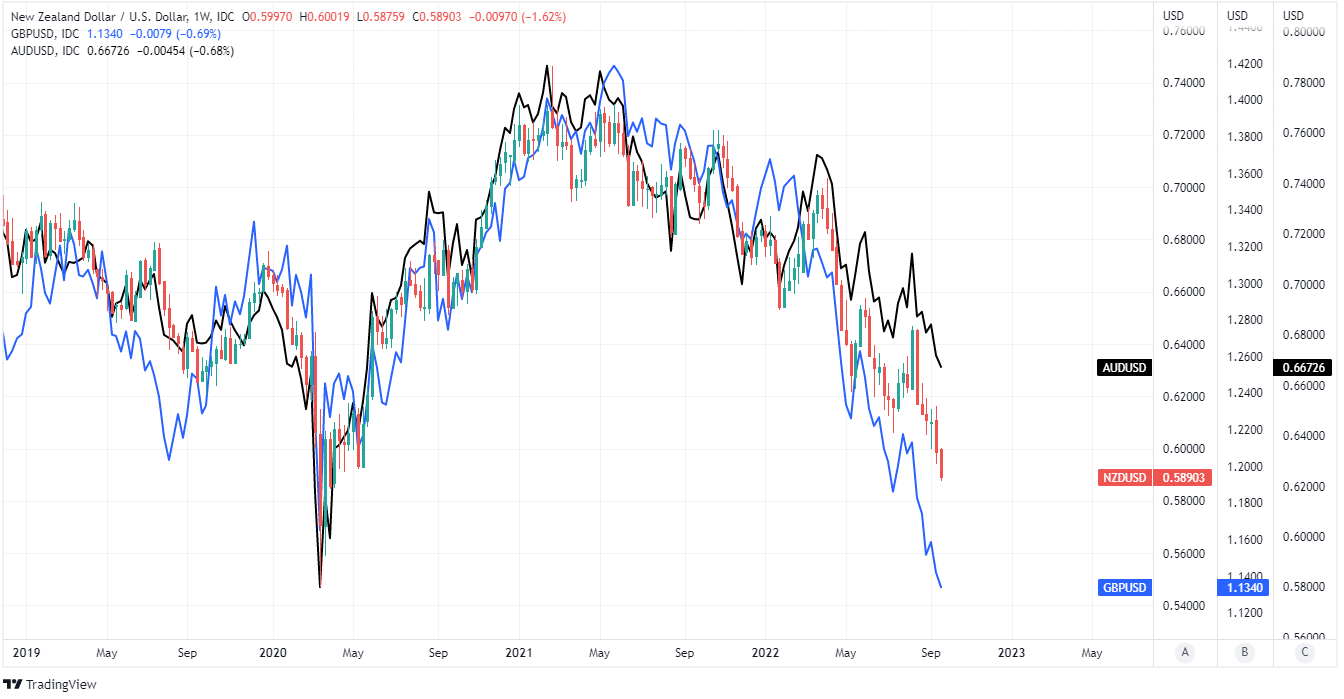 Above: NZD/USD shown at weekly intervals alongside GBP/USD and AUD/USD.

"Looking at today’s Fed meeting, with a 75bp hike fully priced, a 100bp hike would be a more immediate USD bullish outcome by forcing the market to consider whether other central banks can realistically keep up with upside-surprise Fed rate hikes of that magnitude," says Shahab Jalinoos, head of FX trading strategy at Credit Suisse.

"Conversely, a 50bp rate hike would be a huge USD-negative shock now that key ex-US central banks are hiking by more than that level. We ascribe a very low probability to this outcome," Jalinoos said on Wednesday.

There is high uncertainty about the size of the likely interest rate step that will be announced by the Fed on Wednesday following last week's release of inflation data for August, which showed  overall and core U.S. inflation accelerating again in month-on-month terms.

This was at a point Fed policymakers had expected U.S. inflation would be beginning to decline, hence why some analysts have warned of an exceptional 1% increase in the Fed Funds rate this week.

Rapid increases in U.S. interest rates since March have acted like a steroid for the U.S. Dollar and weighed heavily on other currencies including the Kiwi and Sterling while analysts were almost unanimous on Wednesday in expecting the greenback to remain in the ascendancy for a while longer. 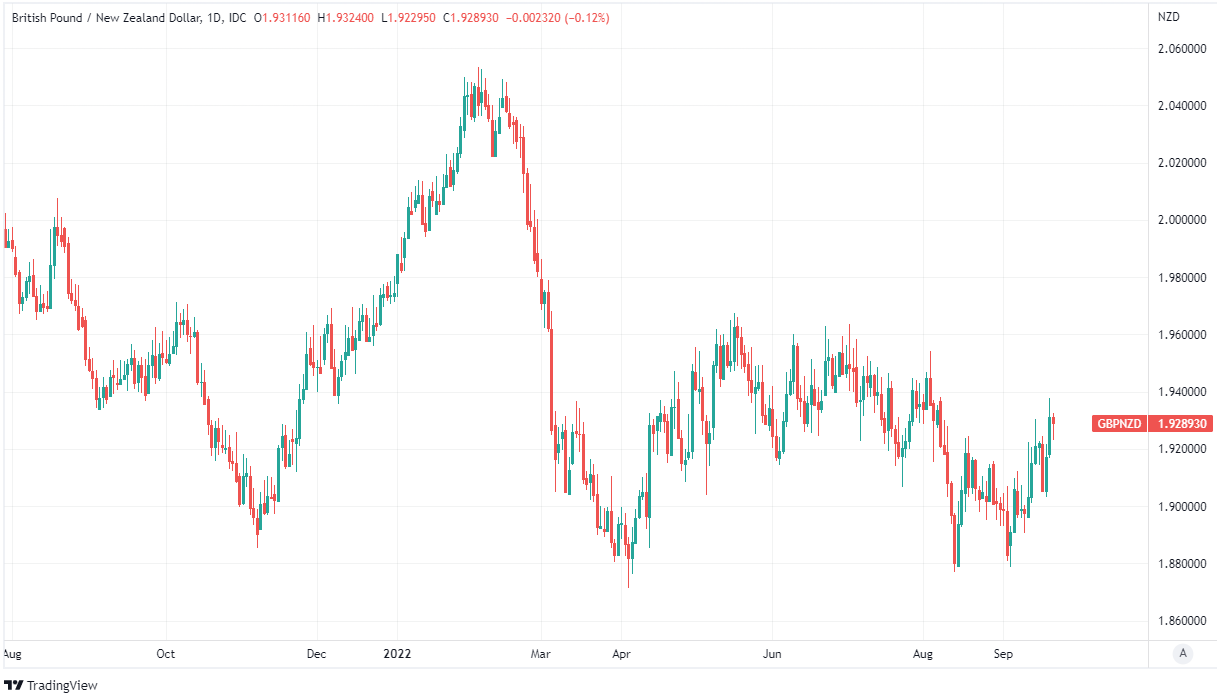 To the extent that the analyst community is right, Wednesday's Fed decision could be a harbinger of further losses for NZD/USD, although the Kiwi may have better prospects in relation to the Pound, which faces risks coming from another Bank of England decision on Thursday.

"We expect the MPC to hike Bank Rate by 75bps with 6 votes in favour, and unanimously vote to commence active Gilt sales at a pace of £10bn/qtr. Wage pressures are rising rapidly, inflation expectations remain elevated, and fiscal easing will put pressure on the MPC," says Mark McCormick, global head of FX strategy at TD Securities

"While our above-consensus call might provide a knee-jerk spark, we would quickly fade it, especially as GBP has averaged a 0.30% drop on BoE days since they commenced rate hikes last year," McCormick said on Tuesday.

Analysts and economists are also split over the extent to which the BoE may lift Bank Rate on Thursday, although none of this year's five separate increases have done any obvious favours for Sterling anyhow.

August's decision saw Bank Rate lifted by a larger-than-expected 0.50% to its current 1.75% level but was followed by widespread losses for Sterling. 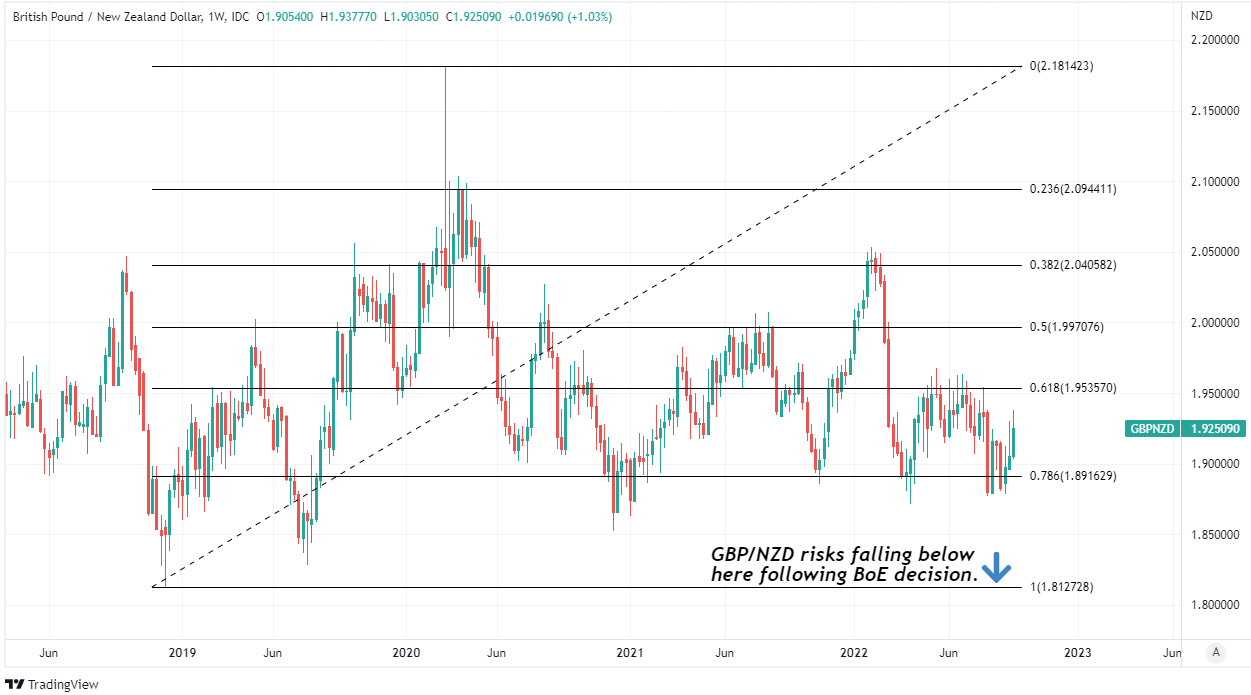 "Our uncertainty level is above average, but we conclude that the short-run outlook for the GBP remains worrisome despite significant weakness to-date. Our expected 1M range for GBPUSD is now 1.10-1.17," says Stephen Gallo, European head of FX strategy at BMO Capital Markets.

"If the BoE adopts a notably slower pace of rate hikes than its G7 peers or pauses the hiking cycle earlier than its peers, the GBP will probably fall quite sharply. The FX market might view this as BoE capitulation," Gallo wrote in a Tuesday research briefing.

Sterling's consistently negative response to increases in Bank Rate could be doubly relevant for GBP/NZD this week if the author is right to suspect the BoE will actually lift rates much further than all forecasters imagine on Thursday.

To the extent that this admittedly wild forecast is right, then there could be a risk of GBP/NZD falling to some of its weakest levels since the months immediately after the Brexit referendum following the BoE's decision on Thursday.

Thursday's decision will come barely more than a week after Office for National Statistics figures revealed a fresh increase in core inflation for August and hard on the heels of Inflation Attitudes survey from the BoE suggesting that households' expectations of medium-term inflation remained at possibly-concerning levels last month.