The Pound to Dollar exchange rate slipped to new forty year lows at the opening of a holiday-shortened week but could be headed for some exceptional volatility including a possible midweek rally by Sterling as well as potential 'Black Thursday' style slump toward its lows from 1985.

Sterling was quoted below the 1.14 handle against the Dollar in Bank Holiday trading for only the second time since March 1985 but faces a rollercoaster ride through a central bank policy bonanza this week with interest rate decisions from the Federal Reserve (Fed), Bank of England and a long line of others.

That could, if the author is right with this admittedly wild forecast, result in high volatility from the midweek session on including a potentially sharp corrective rally by Sterling back in the direction of 1.20 and a possibly large slump following Thursday's BoE decision.

"Inflation has yet to peak. Headline and core inflation are still increasing in most cases in G10, from already very high levels, multiple times above targets.This is despite energy prices starting to fall and it is broad based," says Athanasios Vamvakidis, head of G10 FX strategy at BofA Global Research. 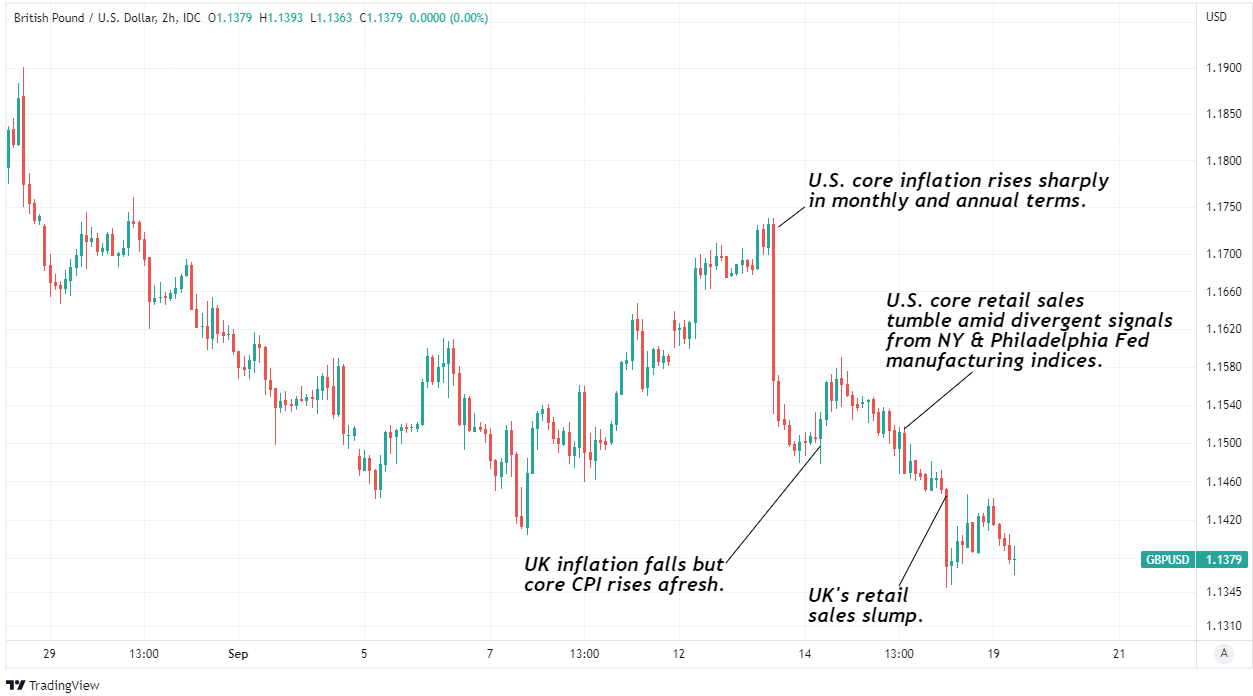 "The increase in core inflation in particular, in both the US and the Eurozone, reflect strong price pressures. Stretched labor markets point to wage pressures, which in some cases are already in progress. The hope was that at least US inflation had peaked, but this week's data suggested otherwise," Vamvakidis said on Friday.

Last week's U.S. inflation data might have been a game-changer for members of a Federal Open Market Committee many of whom have recently expressed evapourating tolerance for high inflation and the associated risks to medium and long-term expectations of inflation.

The data showed overall and core inflation accelerating in month-on-month terms in August and at a point when Fed forecasts had assumed inflation would be in the midst of an unambiguously clear decline.

This begs questions of how the Fed could do anything other than raise U.S. interest rates much further than it has done so far in the cycle this Wednesday, and also of what effect that might be likely to have on the Dollar and Pound.

"We wouldn't be surprised by mild verbal intervention against USD strength alongside next week's FOMC. And in that FOMC, we still expect 'only' a 75bp hike, where the market now has 82bps priced in," says Greg Anderson, global head of FX strategy at BMO Capital Markets. 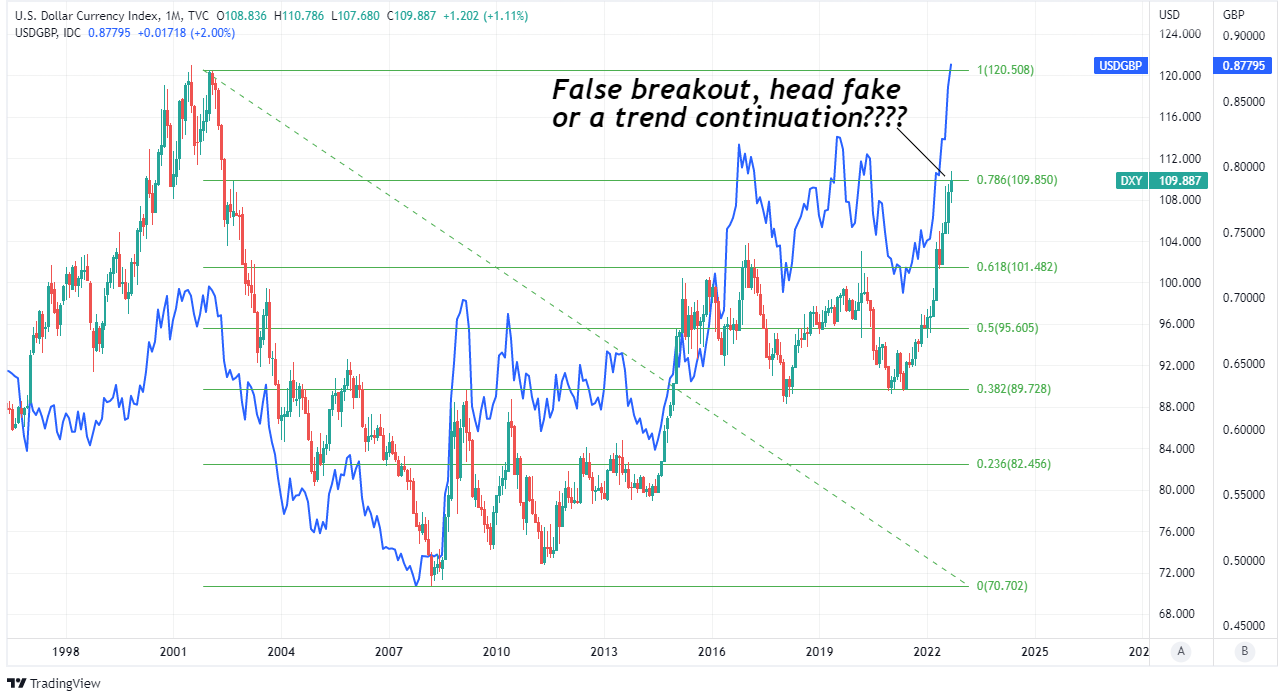 Above: U.S. Dollar Index shown at monthly intervals with Fibonacci retracements of 2002 downtrend indicating medium and long-term areas of technical resistance. Click  image for more detailed inspection. To stay on top of the market set your own free FX rate alert, here.

"The dot plot should shift up to show a 4-handle terminal rate and a long hold in 2023 and 2024, and we think the USD impulse of the FOMC is more likely to be USD-negative than USD-positive. We still don't think the USD cycle top is in, so we're sticking with our "1-3% higher over the next 1-3 months" mantra for now, but we fully acknowledge that the risk:reward of trying to position for that upside is ugly," Anderson said following last week's inflation data.

Almost all forecasters expect the Fed to lift its interest rate by 0.75% to 3.25% on Wednesday while pricing in interest rate derivative markets suggests a small probability of the bank lifting its benchmark for borrowing costs by an exceptional 1% increment.

"With another 75bp hike more than fully priced into the market following today’s CPI report, there is no reason for the Fed not to deliver another super-sized move. We now expect the FOMC will validate the market’s current expectation for a 75bps hike next week, and put at least some (small) odds that a few officials may prefer 100bp hike," says Kevin Cummins, chief U.S. economist at Natwest Markets.

The author suspects the Fed will do something different, however, by lifting interest rates straight to its currently-estimated 'terminal rate.'

This would be most consistent with the various recent examples of officials citing 1980s Fed Chairman Paul Volcker's approach as a model for dealing with inflation. 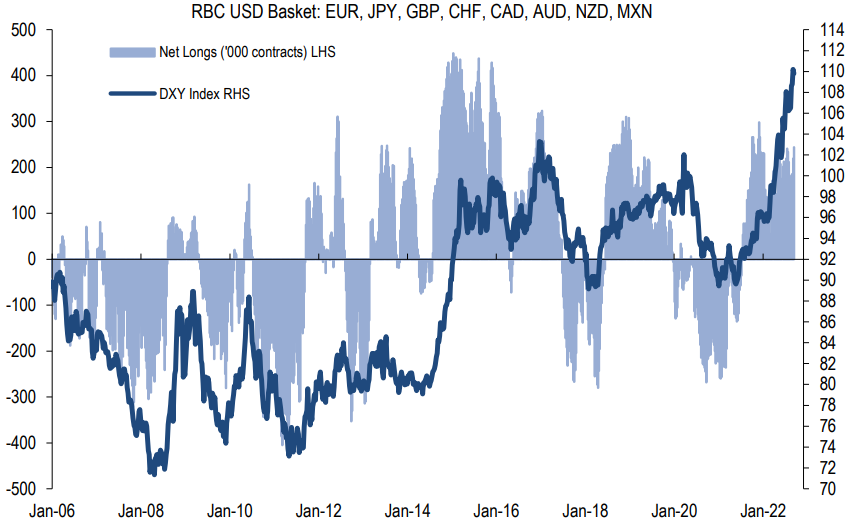 If the author is right about that then it would likely mark at least an intermittent end to the Fed's rate hiking cycle and so beg other questions, although this time of the speculative side of the market that has bid the Dollar higher against almost all currencies in recent months.

To the extent that this encourages speculators to book profits, there could be a large wave of profit-taking in Dollar exchange rates around mid-week and one that may be enough to lift the Pound notably; potentially back toward 1.20.

However, if the author is wrong about this, then the outlook for the Pound might well be even more grim and in part because Thursday's BoE decision appears set to do worse than no favours at all for Sterling almost irrespectively of what the Monetary Policy Committee decides.

"Typically large fiscal issuance has come in times of crisis, and QE has been the backstop. Now, the opposite is true. Concerns around who will absorb this issuance may lead to foreigners demanding lower prices, which can come from either gilts or FX weakening. This is a trend we have seen already," he added. 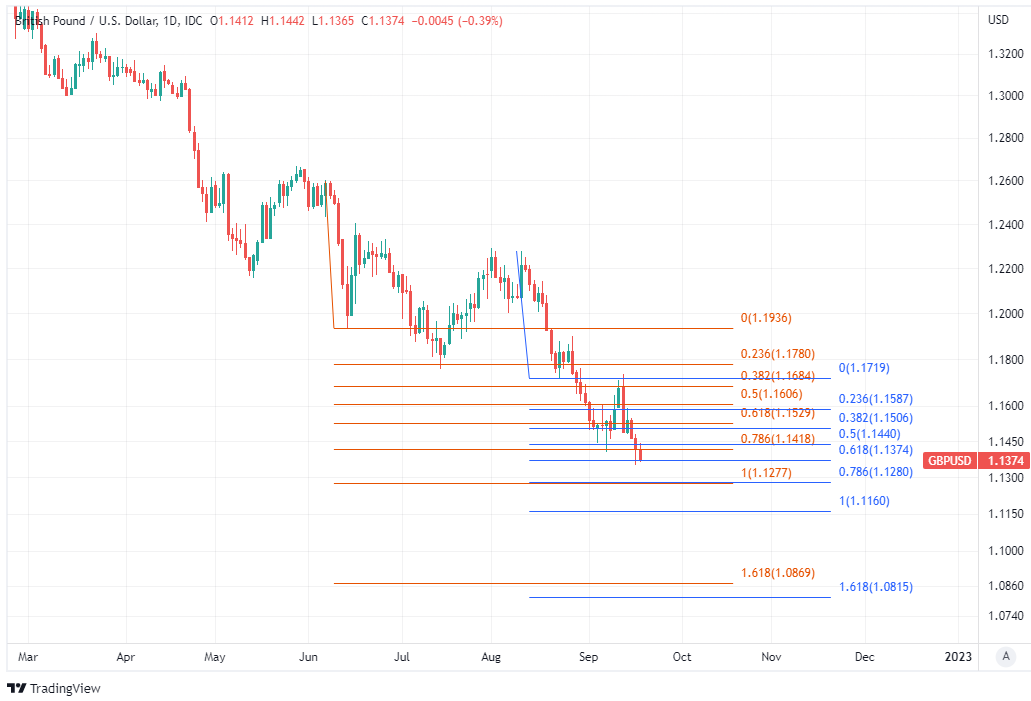 This is all after official data revealed last week that inflation pressures broadened out across the economy in August and following a BoE Inflation Attitudes Survey that had inflation expectations sitting way above the BoE's 2% target 5-years ahead.

The above might be likely to worry the BoE's Monetary Policy Committee because expectations are thought to influence actual inflation rates.

Inflation near double digit percentages is a big part of why many economists expect the BoE to lift Bank Rate by either 0.50% or 0.75% on Thursday in a decision that might be likely to further wound the Pound if the market reaction to August's increase is anything to go by.

The author suspects however, that the BoE may lift Bank Rate by at least +125 basis points to 3% and that this will also do no favours for Sterling.

The latter is in part because the decision would still leave UK government bonds with deeply negative inflation-adjusted yields at a point when government spending is about to increase significantly. 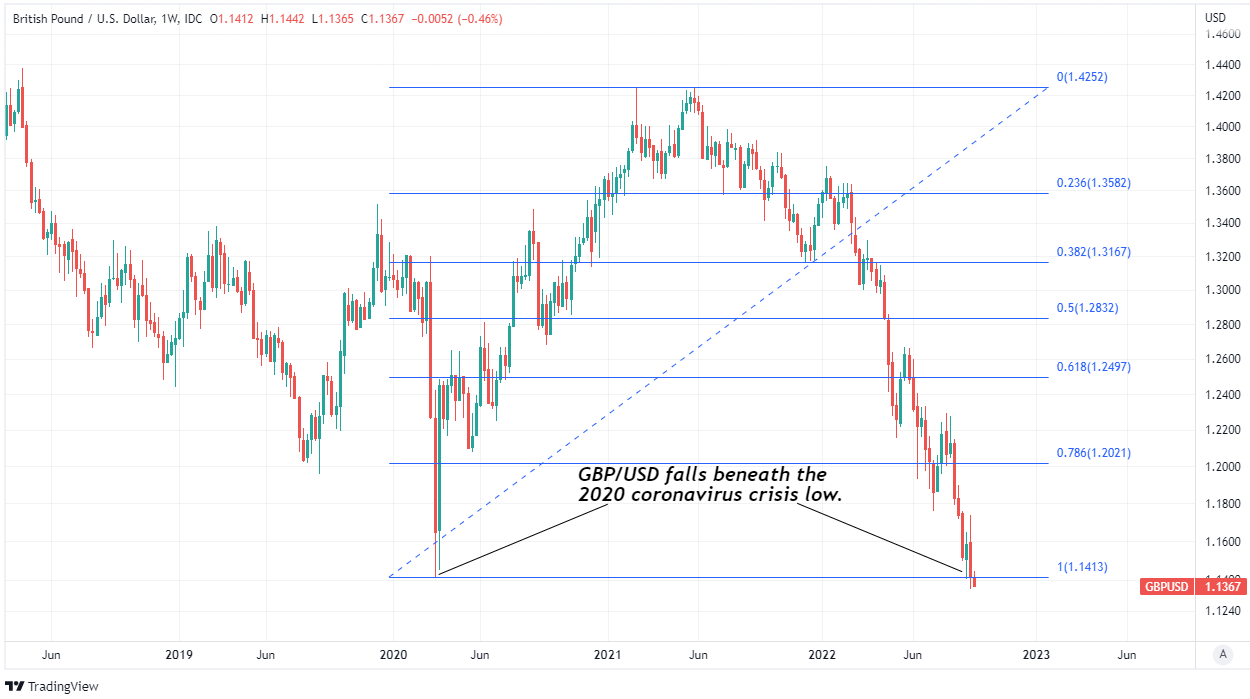 “A dovish outcome risks the currency being penalised by a lack of carry,” Robson and colleagues wrote in a Friday research briefing.

All of this is a part of why the author thinks the Pound could see high levels of volatility in the week ahead.

That could include a sharp Wednesday rally as well as a 'Black Thursday' style slump below 1.10 and potentially as far as 1.0613.

This forecast may be very, very wildly wrong and readers should probably take that to be the case if it isn't realised within the week, although more important is how to view such an outcome if it proves to be correct.

After all, such large losses would make great fodder for political pundits.

Put differently, it should probably be viewed as a natural macroeconomic adjustment rather than as a cause for concern. 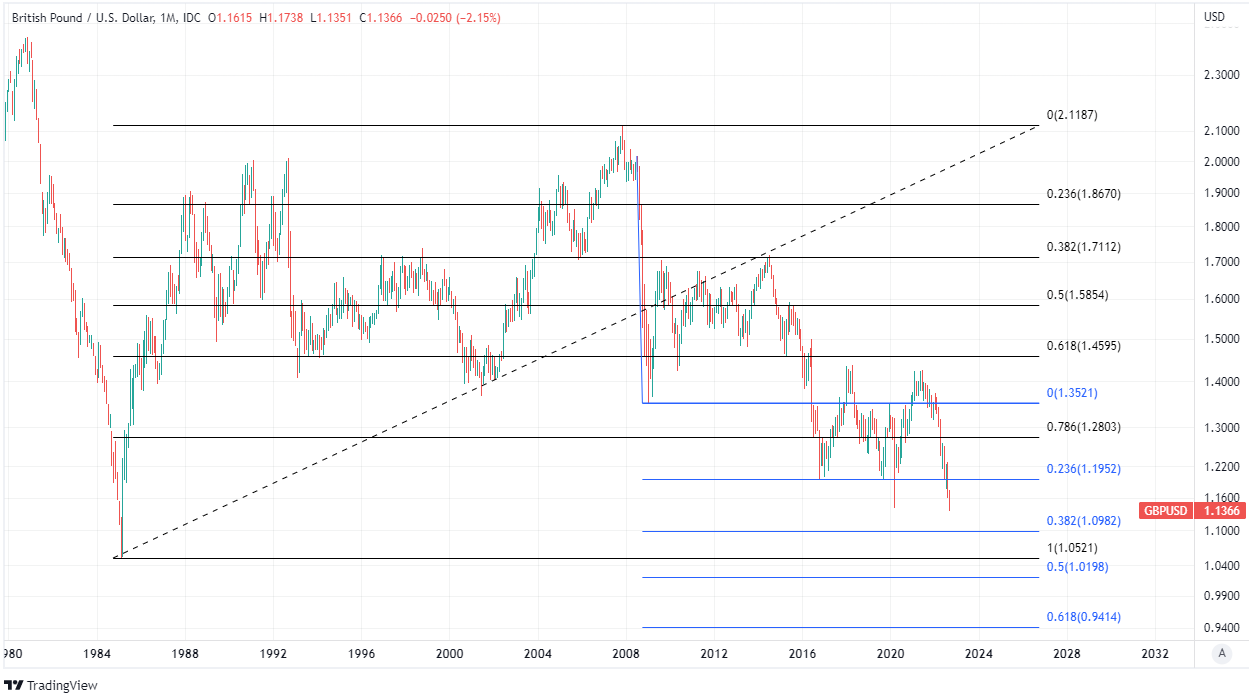