The Pound-to-New Zealand Dollar exchange rate hit its highest level since September 07 on Thursday after members of the Reserve Bank of New Zealand ratcheted up expectations for negative interest rates, while a broad-based rally in Sterling on Brexit developments lifted most GBP-exchange rates.

RBNZ officials signalled further aggressive easing measures are now in the pipeline, and that they would rather do too much too soon than risk doing too little too late.

"The biggest mover was the New Zealand dollar, which tumbled in the early Asian session on reports that the Reserve Bank of New Zealand is 'actively working' on negative rates according to an unnamed official," says Raffi Boyadjian, Senior Investment Analyst at XM.com.

RBNZ Chief Economist Yuong Ha indicated an aggressive approach on providing further stimulus and said in an interview overnight that "we’d rather do too much too soon than too little too late."

The comments were echoed by RBNZ Assistant Governor Hawkesby who reiterated the Bank is actively working on negative interest rates and a funding for lending programme.

The RBNZ indicated in its October policy meeting that it was likely to institute a funding for lending programme ahead of introducing negative interest rates in order to shore up the viability of domestic banks. Cutting interest rates into negative makes banks less profitable and could therefore pose a structural threat to the financial system.

Therefore the funding for lending programme is as clear a message that negative rates are coming as any. Hawkesby noted that inflation and employment are expected to remain below targets for the next 2-3 years which is "a very clear signal in terms of our dual mandate to be providing stimulus".

The RBNZ has not fixed a number for the lowest level it believes it can cut interest rates, but indicated they are looking at a tiering regime for negative rates.

The rule of thumb in foreign exchange is that when a central bank signals it is to cut interest rates the currency it issues falls. But with most central banks in a rate cutting cycle this assumption can be questioned, unless the central bank in question proves to be more aggressive than its peers.

This has been true of the RBNZ and helps explain why the NZ Dollar has been one of the biggest underperformers of 2020.

The NZ Dollar's initial reaction to the comments was a textbook decline, however it is raising some eyebrows by recovering these losses and going higher: 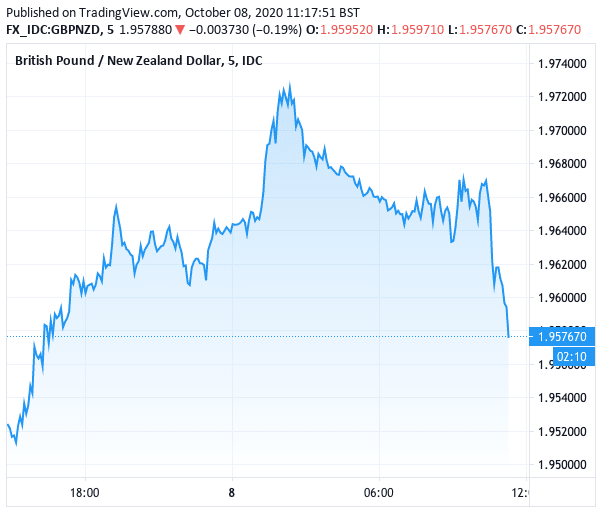 GBP/NZD rose sharply on RBNZ comments to only rapidly unwind the move. If you have outstanding GBP/NZD payments and would like to book current rates for use in the future, or automatically book your ideal rate, please learn more here.

"The NZD has surprised somewhat with its resilience, given clear indication from the RBNZ that it is willing and actively preparing for a negative rate policy if needed," says John J Hardy, Head of FX Strategy at Saxo Bank.

Therefore, the bar to further declines on this narrative is set rather high.

It will take increasingly more aggressive communications by the RBNZ to push this theme, and the market could be starting to bet that the limit has been reached.

Indeed, the prospect for New Zealand-positive narratives to emerge is increasing.