The New Zealand Dollar will weaken again this year as the Reserve Bank of New Zealand (RBNZ) cuts its interest rate to a new record low, according to the latest forecasts from Westpac, which should drive the Pound-to-Kiwi rate higher even as the UK economy sits in limbo half in and half out of the EU.

Westpac, one of Australia's four largest lenders by assets, projects almost no gain for Sterling over the U.S. Dollar this year given a superior outlook for U.S. interest rates and an anticipated period of prolonged uncertainty about the UK's future relationship with the EU.

Its forecasts were released just before the European Council granted Prime Minister Theresa May an extension of the Article 50 negotiating window in order for the embattled head of government to force her withdrawal proposal through parliament or come up with an alternative idea in cahoots with opposition MPs.

The extension leaves the threat of a potential, and so-called, no deal Brexit on the table until October 2019 and ensures that in the absence of parliamentary approval of PM May's proposed model of exit, the economy will remain shrouded in uncertainty.

But that won't prevent the Pound-to-New-Zealand-Dollar rate from rising this year, Westpac says, as the Kiwi currency has problems of its own to contend with. Not least of all, Reserve Bank of New Zealand interest rate policy.

"Headline inflation has persistently undershot the 2% mid-point of the RBNZ’s target band for seven years now (save for one petrol-soaked quarter in 2017). And even with substantial fiscal stimulus now being rolled out, the forces that have dampened price growth in recent years are still present," says Richard Franulovich, Westpac's head of FX strategy."With those concerns in mind, we now expect the RBNZ to cut the OCR at its upcoming May policy meeting."

New Zealand's economy is slowing, like many others, and reducing inflation pressures in the process. However, this slowdown is coming at a time when inflation has already been below the midpoint of the 1%-to-3% target band for seven years.

Inflation has been low because of a range of factors including competition in the retail sector, which has constrained growth in prices of products on store shelves, but adding an economic slowdown to the bucket of existing disinflationary pressures further undermines the Kiwi interest rate outlook.

The RBNZ warned in March the next move in its cash rate is likely to be a cut, after Statistics New Zealand said the economy grew by 2.8% for the 2018 year, down from 3.1% in 2017. Third quarter growth was its weakest for four years and unemployment rose by nearly 9% during the final quarter of 2018.

"We have long been concerned that GDP growth will slow by more than the RBNZ is expecting in the early-2020s with significant drags from the introduction of a capital gains tax, the end of the construction boom and slowing population growth. We now expect the RBNZ to respond to these developments by cutting the OCR again in the early-2020s and have pencilled in a second 25bps move for May 2020," Franulovich writes, in Westpac's latest market review.

Franulovich says there is a risk the second interest rate cut comes sooner than May 2020 and that its exact timing will depend heavily on developments in the economy over the coming quarters. Signs of an accelerated slowdown could easily force the RBNZ to act sooner.

Interest rate decisions are normally only taken in relation to the inflation outlook but impact currencies through the push and pull influence they have over capital flows and their allure for short-term speculative traders. 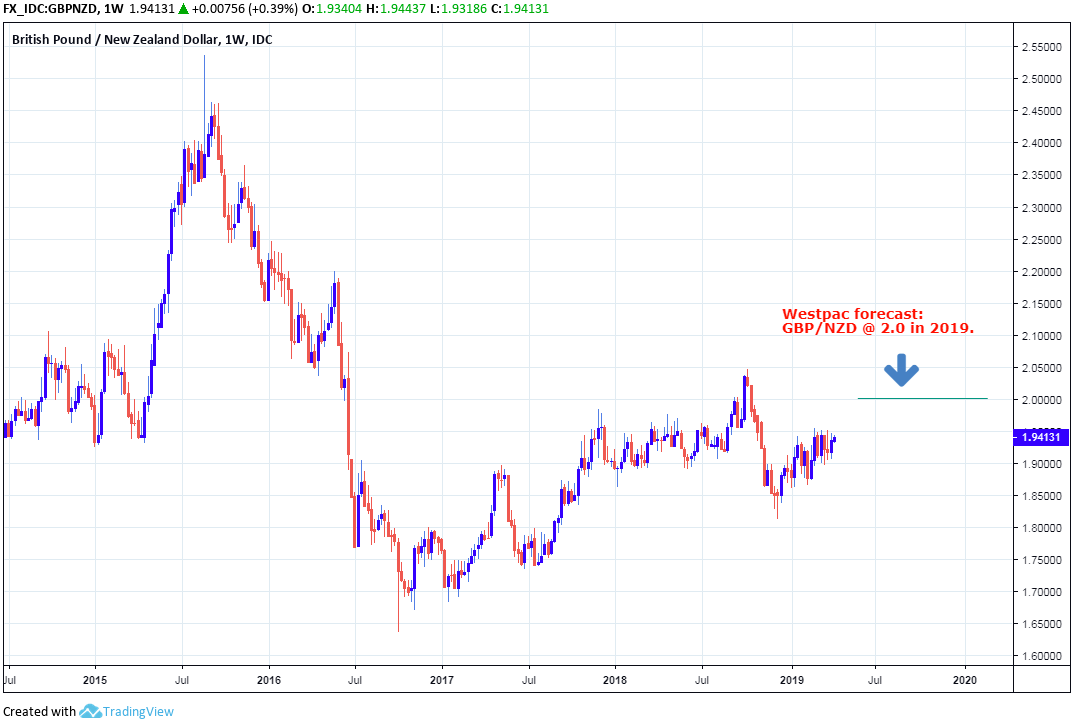 A further fall in economic growth would likely constrain the consumer price index, at the very least, thereby demanding an offsetting crux of support from either RBNZ rate policy or government in the form of fiscal policy.

This would be bad for the New Zealand Dollar, although it wouldn't be as severe as scenario as it could have been because the market has already been betting on rate cuts for quite some time already.

The market-implied RBNZ cash rate for November 14, 2019 was just 1.4% on Thursday, far below the current 1.75% cash rate, which suggests investors have taken one full 25 basis point rate cut to the bank already. Only a deeper cut than that could meaningfully damage the Kiwi currency this year.

"This change in our forecasts follows an unexpected shift in stance from the RBNZ," Franulovich says. "Underlying the RBNZ’s change in stance is a growing nervousness around the state of the global economy. The early part of 2019 has seen dovish tilts from several major central banks. The RBNZ appears concerned that there could be an undesired rise in the New Zealand dollar if it failed to join the pack."

Franulovich forecasts the Pound-to-Kiwi rate will rise from 1.93 on Thursday to 2.0 by year-end. Westpac's projections also suggest the exchange rate could rise above that level very briefly between the June and September.