- Sterling to cue from Brexit vote; NZD from China data

The Pound-to-New Zealand Dollar rate is trading at 1.8875 at the start of the new week, after falling more than half a percent in the previous week.

Although global risk trends appear to be in the driving seat now, in the week ahead the pair is likely to be affected by Sterling-volatility as the 'meaningful vote' on the government's Brexit deal takes place on Tuesday, January 15, at 19.00 GMT.

From a technical perspective, the charts are providing contrary evidence which doesn't help us to forecast the direction of the next move, although if pushed a very marginal bullish bias is evident on the daily chart.

Normally the established trend is inherently biased to continue, so technical analysis largely consists in defining the direction of the trend, which then provides a directional bias on which to base a forecast. Yet in the case of GBP/NZD this is not as simple as it sounds. 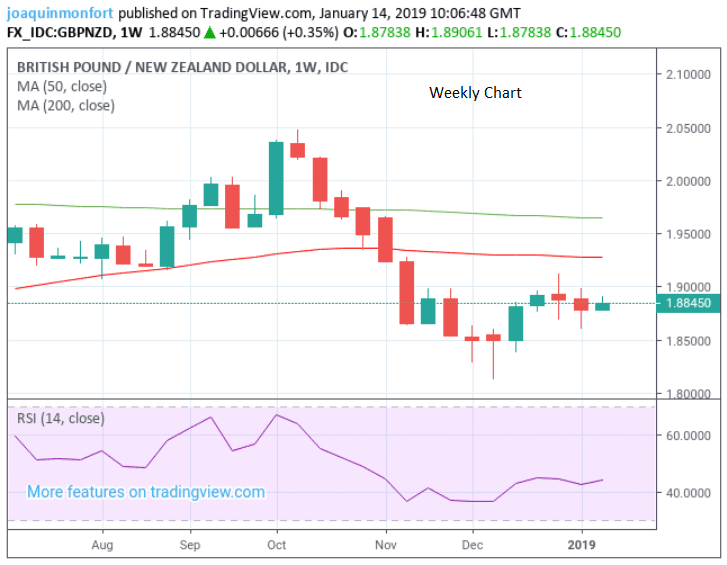 The weekly chart is showing that a correction is underway in a more established downtrend. Yet although the overarching trend is bearish - ever since the 2.04 highs achieved in October 2018 - the recovery since the 1.81 lows set in December has also been quite strong and it is possible to argue that a new uptrend may be in the process of forming. Given both POV's are valid, the chart provides us with little edge. 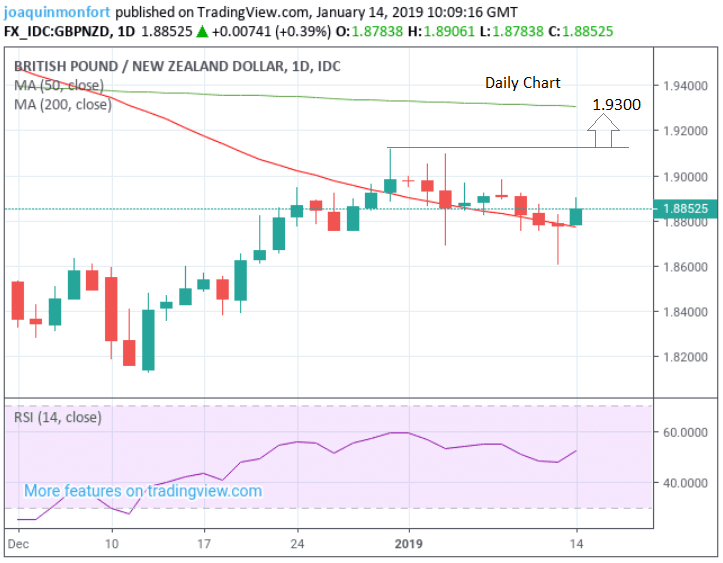 Looking at the recovery since the December lows in more detail on the daily chart we note that whilst the pair has established a clear short-term uptrend, confirmed by the formation of two higher highs and higher lows, the pair has also undergone a fairly lengthy decline in January since it peaked on December 31 at 1.9190, and it also possible to argue that this decline has also now established a new short-term downtrend.

One bullish sign on the daily chart, however, is the location of the 50-day moving average (MA) which is providing underpinning support to the exchange rate. 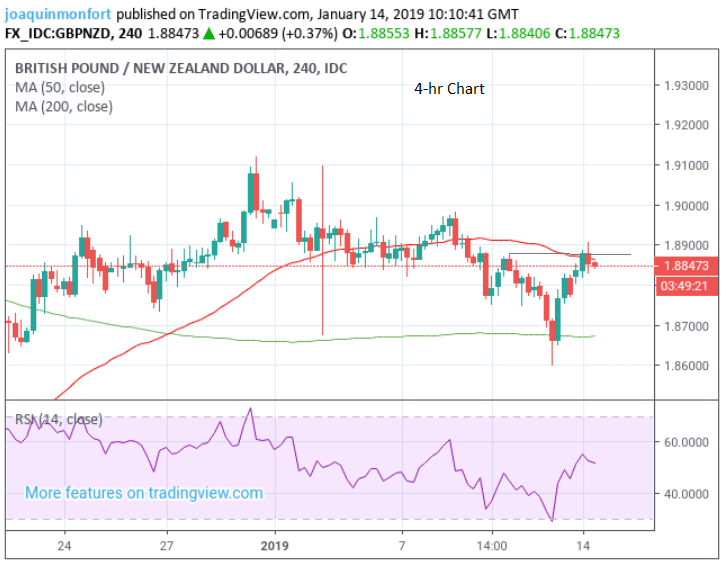 The declining peaks and troughs on the 4hr chart seem to suggest a bearish bias, but the strong rebound since the January 11 lows has now surpassed the last higher low before the low of the 11th which is a bullish sign - further adding to the confusion.

The RSI momentum indicator in the bottom panel was bullish on the daily chart up until the December 31 highs, but the pair pulled back anyway and that time the strong upside momentum was not a sign of more upside to come, yet it is also true that downside momentum in January has been weak, perhaps arguing for a bias to the upside.

Overall we are neutral on a technical basis, with a very slight bullish preference, if forced to choose.

A break above the new year highs at 1.9190 would be required for more validation, however, with a cautious upside target thereafter at 1.93.

AdvertisementGet up to 3-5% more foreign exchange by using a specialist provider than a bank. A specialist will get you closer to the real market rate and avoid the gaping spreads charged by your bank when providing currency. Learn more here

The main releases in the week ahead will probably be those out of China, given New Zealand's close trade links with the world's second-largest economy.

We have already had trade data overnight and analysts will be wanting to see whether some disconcerting signs in that data are replicated across other key gauges, reinforcing the negative outlook (and negative NZD bias).

Both Chinese imports and exports fell unexpectedly heavily in December. Exports by -4.4% when they have been forecast to rise 3.0% and rose 5.4% in November; and imports by -7.6% versus a consensus expectation of 5.0% rise, and 3% previously.

Although the actual current account balance rose to $57bn (higher than the expected $51.5bn) the trade volume declines were more concerning, and this weighed on NZD and AUD on Monday morning.

“This slowdown does not bode well for risk today and is impacting across the higher risk commodity major currencies such as the Aussie and Kiwi which are aligned to continuing the Chinese growth engine. A slip back into more of a safe haven bias is being seen today, with the yen performing well, whilst gold is holding up, Treasury yields are lower and equity markets are under pressure,” says Richard Perry, market analyst at broker Hantec Markets.

Later in the week Chinese Q4 GDP data, out in the early hours of Thursday, January 17, could re-stoke global growth fears if it undershoots the 6.4% forecast, which is looking increasingly possible.

Chinese house prices, out on Wednesday, at 01.30, could also be important given the old adage ‘housing leads the economy’.

On the domestic data front, the main releases are NZIER Business Confidence, out on Monday night at 21.00, the global dairy trade index out on Tuesday at 14.30, and Business PMI out at 21.00 on Thursday.

None of these are likely to be market-moving, however, unless they show extreme, unexpected, swings, as NZ domestic data rarely moves FX markets.

The Pound: A Big Week for Brexit Politics

By far the most important event in the week ahead is the vote on Theresa May’s Brexit deal, scheduled for Tuesday 15, at 19.00 GMT. The outlook definitely favours the government to lose, and it is more a question of ‘by how much’ rather than ‘whether’.

The Pound's reaction will therefore likely depend on the size of the loss, and what comes next. If the loss is large - defined by a 100 or more MPs - as some analysts believe, it might signal the death of the government’s deal and could prompt a knee-jerk move lower in Sterling.

"Very few commentators expect the deal to pass, so the move in GBP would likely be limited on that news alone," says Jordan Rochester, analyst with Nomura. "But we would be looking at the size of the defeat to understand whether a repeated vote could get over the line."

The expected defeat would probably lead to a vote of no-confidence in the government, called by the Labour Party with Labour leader Jeremy Corbyn telling the BBC's Andrew Marr on Sunday that he would call the vote soon. But we don't see the government losing such a vote as the DUP and Conservative party would unite to defend their hold on power.

"We’d expect the government to win a vote of no confidence as turkeys rarely vote for Christmas," says Nomura's Rochester.

We think the government will ultimately rework the Brexit deal and bring it back to parliament for a second airing, and there is talk of some EU concessions being made available to help the deal cross the line on a second vote.

While there is a majority in Parliament who are committed to avoiding a 'no deal' Brexit, as proven by last week’s finance bill vote, there is not necessarily a majority to command an alternative plan. That said, a report in the Sunday Times reports Downing Street uncovered a bombshell plot by senior MPs to seize control of Brexit negotiations and sideline the prime minister. At least two groups of rebel MPs are plotting to change Commons rules so motions proposed by backbenchers take precedence over government business, upending the centuries-old relationship between executive and legislature.

This in effect could see Brexit delayed, cancelled or another Norway-style Brexit delivered. All scenarios lead to a softer Brexit which is good for Sterling. However we would be seriously worried for the long-term stability of UK politics if such a coup were to take place.

Last week's reports that a large portion of Labour Party MPs are open to supporting the deal if they can secure their own changes is a significant shift in the debate we believe: if these MPs secure some changes to the deal, a softer Brexit is in sight, which represents an all-out positive for Sterling.

Labour MP John Mann says that it is "likely" that he will support Theresa May's Brexit deal, and says a number of Labour MPs will likely do the same #Ridge pic.twitter.com/sEOeoEn84x

Last week's report the government is considering a delay to the Article 50 process is also notable in that it suggests government ministers are aware that all alternative Brexit scenarios that would follow the failure of May's deal, would need more time to formulate and execute. While the reports were officially denied by 10 Downing Street we believe this a case of where there is smoke, there is fire.

“Perhaps the best-case scenario for the Pound, barring the deal passing in parliament, would be a delay to the article 50 process. This decision would have to be agreed by the EU, however they are likely to do so, with the Pound set to appreciate due to the removal of the pressure of hitting the 29th March deadline for exiting the EU,” says Michael Brown, Senior Analyst at Caxton FX.

Brexit aside, the two main economic releases in the week ahead are inflation out on Wednesday and retail sales on Friday. Of the two, analysts think the latter is most likely to have the greater impact on Sterling.

“With the Bank of England not expected to raise interest rates unless Parliament approves a smooth Brexit, the inflation data is unlikely to have much impact in currency markets. Retail sales on the other hand could see a stronger response by traders as it’s a better gauge of UK growth momentum,” says Raffi Boyadjian, an analyst at broker XM.com.

Retail sales are forecast to show a -0.7% fall in December according to consensus estimates. If so the Pound could fall due to a drop in expected Q4 growth.

Wednesday’s inflation data, meanwhile, is expected to show a rise of 0.2% month-on-month (Mom) and 2.2% compared to a year ago, when it is released at 9.30, with little changed from the previous print. The higher the result the better for the Pound and vice-versa.

AdvertisementGet up to 3-5% more foreign exchange by using a specialist provider than a bank. A specialist will get you closer to the real market rate and avoid the gaping spreads charged by your bank when providing currency. Learn more here