Pound Sterling rose to its strongest level of 2018 against the Euro and levels not seen since November against the Dollar on news that the government is considering delaying the date of the UK's departure from the EU beyond March 29.

According to reports in London's Evening Standard, "a backlog of at least six essential Bills that must be passed before Britain leaves the European Union has left ministers convinced the timetable will be extended."

Market watchers are citing the report for the recovery in Sterling ahead of the weekend.

The report adds that, "even asking MPs to sit at weekends and cancel their half-term holiday in February may not provide enough time to avoid asking for a delay, several sources have disclosed."

A senior minister told the Evening Standard: "the legislative timetable is now very very tight indeed. Certainly, if there was defeat on Tuesday and it took some time before it got resolved, it’s hard to see how we can get all the legislation through by March 29.” The report quotes a minister as saying there was “strong resistance” around the Cabinet table to any delay. "Nobody desires it," they said. “We may have to sit down and really prioritise. But we would then be in an emergency crisis situation.” The report could therefore yet be denied before the day is out.

Nevertheless, any delay to Brexit is good for the British Pound as it mitigates against the currency's worst-case scenario outcome which comes in the form of a 'disruptive no-deal' Brexit. The delay does not mean a 'no deal' Brexit is off the table, but it does suggest at the very least the odds of a 'disruptive no-deal' have diminished, and this is good for the Pound.

We do however expect any gains to be limited and the British Pound should ultimately track recent ranges against most major currencies ahead of next week's Brexit vote and subsequent developments. 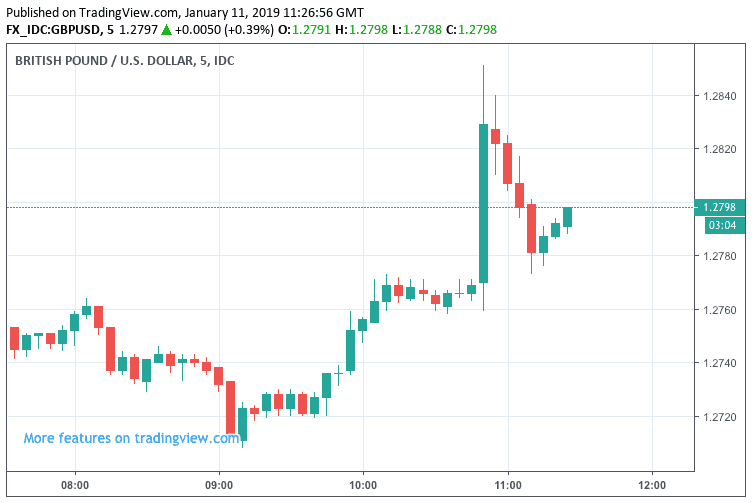 "The Pound has risen on the back of a report from the Evening Standard, which suggested that a Brexit delay beyond March 29 looks increasingly likely, citing Cabinet ministers on the matter. The pound’s positive reaction suggests investors are betting that the potential delay in the official exit date means the chance for a no-deal outcome would decrease," says Fawad Razaqzada, an analyst with Forex.com.

A spokeswoman for British Prime Minister Theresa May has meanwhile since ruled out extending Article 50 to delay the country's exit from the European Union according to a report on the Reuters news wire. Expect Sterling to remain beholden to rumours and denials over coming days.

GDP data from the ONS out on Friday shows the UK economy grew 0.2% in the month to November, a figure that beats the consensus expectations for growth of 0.1%.

In the three months to November the economy grew 0.3%, in line with expectations. The data suggests the UK economy is not suffering the sharp slowdown many pundits had feared would be triggered by the chronic uncertainty surrounding Brexit.

However, other data from the ONS was less rosy with industrial production and manufacturing production data coming in below expectation, although it is worth pointing out at the outset that disappointments here pale in comparison to the poor numbers we have seen coming out of Germany, France and Italy over recent days.

The UK's trade deficit with the rest of the world meanwhile read at £12.02BN, much greater than the £11.40BN deficit that markets were expecting.

Despite the better-than-forecast GDP numbers the British Pound has moved lower, confirming suspicions that UK economic statistics are a mere sideshow for the currency in the current environment where Brexit is front and centre.

Pound Sterling was seen struggling ahead of the weekend, joining the Yen and U.S. Dollar at the bottom of the G10 currency league table.

Global markets are in a good mood on Friday, January 11 on news that U.S.-China trade negotiations will move to a higher level, boosting optimism the dispute is headed for resolution.

The optimistic mood has hit safe-haven assets such as the Dollar and Yen while boosting China's Yuan (CNH) and those countries associated with China's economy, such as the Australian and New Zealand Dollars. "U.S.-China trade talks appear to be heading towards a constructive, risk-positive result. USD/CNH is at its lowest level since August as China has pursued additional monetary and fiscal stimulus, lowering the CNH risk premium. China proxy trades (like EUR/USD and AUD/USD) should benefit," says Hans Redeker, a strategist with Morgan Stanley.

Sterling to Remain on a Downward Path: HSBC

Sterling's lacklustre showing will almost certainly however be down to positioning ahead of next week's key Brexit vote which should see parliament reject the deal and the government prepare a 'plan B'.

It is the 'plan B' that will be of interest to markets who will want to know if that 'plan B' is something that can prevent a 'no deal' Brexit taking place on March 29. It is a 'no deal' outcome that could prompt a sharp fall in the value of Sterling, while a successful 'plan B' could trigger a decisive move higher.

"The likelihood of approval of the Withdrawal Agreement is low. This should have little impact on GBP which we believe will remain a probability-weighted blend of the various outcomes for Brexit, all of which would remain on the table following the likely “no” vote by parliament," says Daragh Maher, a foreign exchange strategist with HSBC.

If Prime Minister Theresa May is to see her deal across the line in a second vote, which is the most likely outcome, we would expect she will need to offer some major concessions, particularly if her partners in the DUP are to be satisfied. The DUP, who vote with the government to pass legislation, want legal assurances written into the deal that the Northern Ireland backstop will not be indefinite.

Thus far the EU have refused to give ground, but if May can wrangle a concession that satisfies the DUP we would expect any second vote to be a much closer affair as other Conservative party MPs opposed to the deal will likely follow the lead of the DUP.

However, failure to bring the DUP aboard leaves May with the option of tailoring the deal to suit a number of Labour Party MPs who have indicated they could vote for the deal to avoid a 'no deal' Brexit.

It was reported yesterday that the numbers amount to 40-80 MPs. However, asking the Labour party to vote with the Conservative party is a big ask and we therefore cannot rule out this attempt for compromise failing. Indeed, we are also aware that Labour leader Jeremy Corbyn might opt to call for a vote of no confidence in the government in the event of the deal failing. To succeed some Conservatives might have to vote with the Labour party, to bring down their own government. Turkey's don't vote for christmas.

Expect the British Pound to trade familiar territory against the major currencies as the news flow trickles through, with a more substantial move taking place when it becomes apparent whether the UK is heading for a deal or 'no deal' scenario.

"We think the bias will be for GBP weakness," says HSBC's Maher, "the possibility of legislative amendments underscoring parliament’s lack of support for a ‘no deal’ outcome are immaterial because ‘no deal’ is the default outcome unless something else is agreed."

HSBC's expectation for the rest of the month is for Sterling to move lower but in "a drift rather than a collapse".

Nomura believe the only way to stop the clock running down on a 'no deal' is for MPs to decide on an alternative course of action. However, foreign exchange strategist Jordan Rochester with Nomura in London says he is a buyer of Sterling, saying the UK parliament will ultimately ensure the UK avoids a 'no deal' Brexit.

On such an outcome, Rochester fancies the British Pound's chances against the Euro in particular.

"Over the next few weeks parliament is likely to attempt to find a majority in favour or against Theresa May’s deal. Rather than increasing the likelihood of a 'no deal' outcome, we expect either the deal to scrape through, owing to last minute concessions to the key Brexit groups, or if parliament forces the government to adopt a different or more market positive Brexit stance," says Rochester.

"Hope is a powerful thing and the risks are now skewed to the upside," says Rochester of the Pound's outlook. Indeed, Rochester reckons there is so much bad news already priced into Sterling values that it is hard for the currency to fall any lower. "It’s hard for GBP to weaken more from here."