- Further progress in talks to end trade war necessary to stoke a recovery.

- But HSBC is betting against AUD ahead of Q4 inflation due at month-end.

The Australian Dollar slumped at the opening of the new week after official data revealed a sharp slump in Chinese imports and exports during December, placing a question mark over the health of the world's second largest economy and sending so-called risk assets lower Monday.

China's U.S. Dollar trade in goods surplus rose to its highest level since Janaury 2016 in December, although this was not because of a sudden pick-up in goods trade with the rest of the world, but rather a steep decline in imports that took place during the month.

"The trade numbers from China for December eliminated any doubt about the Sino-US trade war having a painful effect on the Chinese economy," says Amy Zhuang, chief Asia analyst at Nordea Markets.

Chinese companies and consumers spent -7.6% less than on goods imports in December than they did during the same period one year previously, in what analysts are saying is a clear example of President Donald Trump's so-called trade war hurting the economy.

Exports to the U.S fell -3.5% while imports declined by a record -35.8%. Exports to the rest of the world were down -4.4%This pushed the trade surplus up from $51 billion to $57 billion, although the data is a clear negative for the Chinese economy and risk appetite in global markets.

"Lower Asian equity markets, in response to the Chinese trade data, helped to generate downward pressure on USD/JPY and AUD/USD. The Chinese economic data does increase concerns about the strength of global economic activity. The least path of resistance for AUD/JPY is lower (‑0.87% today) when such global growth concerns intensify. Offshore developments will continue to guide AUD this week," says Richard Grace, head of currency strategy at Commonwealth Bank of Australia.

Chinese economic data matters to the Australian Dollar because the Antipodean currency is underwritten by a significant commodity trade with the world's second largest economy. This means the Aussie is sensitive to  news impacting China's economy and currency as well as the outlook for global growth.

Given its close correlation with the Renmimbi, Australia's Dollar has been badly damaged by the U.S. trade war with China, which pushed the AUD/USD rate almost 10% lower during 2018. But the currency has also been sensitive to reports of progress in talks to end the tariff fight, which have helped to lift the currency thus far this year.

Chinese officials said last Thursday that talks have laid "the foundation for resolving issues" over the coming weeks, raising hopes that a deal to end the tariff fight can be reached before March 01, which is when the 10% tariff charged on $250 billion of Chinese exports to the U.S. will automatically rise to 25% if no agreement is struck.

"Against this backdrop is it really that surprising to see China desperate to prevent further escalation in the trade war and attract capital inflows?," asks Sue Trinh, Asia head of FX strategy at RBC Capital Markets. 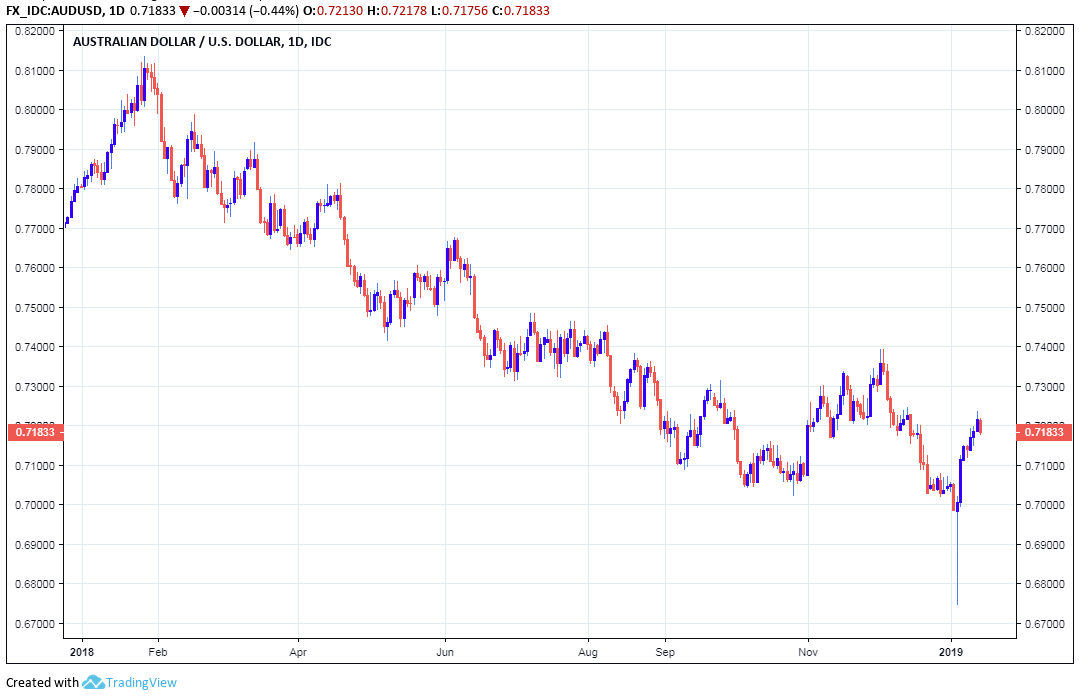 Grace is referring to a parliamentary vote on Prime Minister Theresa May's Brexit proposals, scheduled for the evening of Tuesday, which will also be key to the trajectory of the Pound-to-Aussie rate over the coming days.

"We sell EUR/AUD at 1.6070, targeting 1.5280," says Kamal Sharma, a strategist at Bank of America. "Broader risk metrics are signaling a tactical buy. AUD is the obvious beneficiary of improved risk sentiment. EUR may struggle against backdrop of soft EZ (Euro Zone) data." 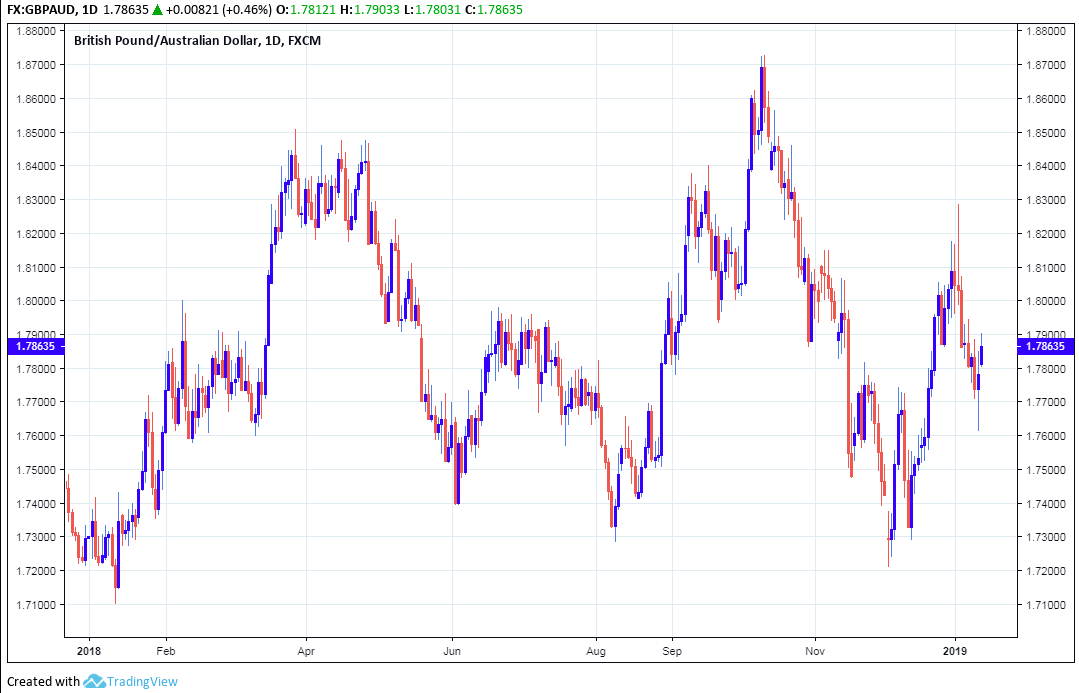 "Global factors have already triggered a considerable rally but the coming weeks may provide greater headwinds from the domestic front," says Tom Nash, a currency strategist at HSBC in Australia.

The trade war has not been the only factor to dent the Aussie of late. Reserve Bank of Australia (RBA) policy has also played its part too, given it drove the gap between Australian and U.S. bond yields against the Aussie last year.

Australia's interest rate has sat at a record low of 1.5% for two years now while rates in the U.S. have reached 2.5%, making U.S. government bonds more attractive for investors to hold and deterring capital away from the Australian market and currency.

Even an end to the tariff fight will not be enough on its own to generate a full recovery of the Aussie Dollar. Full recovery will also require signs that inflation is making a sustainable return into the upper end of the 1%-to-3% target band, as that is a prerequisite for an eventual RBA interest rate rise.

On that note, fourth-quarter inflation data due out on Wednesday 30, January will be watched closely by the market. Australian inflation has been below the 2% level for much of the time since 2012 and another poor reading at month-end would spell more bad news for the outlook and currency.

"A soft inflation reading for Q4 would keep it entrenched below target. If the RBA meeting offers any suggestion that the central bank is less confident the next move in rates is more likely to be up, the AUD would likely crack lower," Nash warns. "Sell AUD-USD at 0.7180".

HSBC is betting against the Aussie in anticipation of a weak inflation number at the end of the month because such an outcome could easily encourage the market to speculate more heavily that the RBA will be forced to cut its interest rate in 2019 in order to encourage an eventual pick-up in inflation.

Changes in interest rates are normally only made in response to movements in inflation but impact currencies through the push and pull influence they have on capital flows and their allure for short term speculators.