- BMO Capital fancy the Pound higher against the Euro

This week’s Super Thursday decision at the Bank of England - where policy announcements and economic forecasts are made - is of heightened importance for the British Pound which has over recent months tied itself to expectations for moves in UK interest rates.

Sterling rose as markets geared up for a May rate rise, and it has fallen as that rise was ultimately kicked into the long grass.

While no change to the interest rate is now expected at this month's event, the Bank's guidance and details contained within the Inflation Report could be crucial in setting up market expectations for an August rate hike, an outcome that is being tipped as being broadly supportive to Sterling.

"The BoE is expected to leave the policy rate unchanged, but to keep the door open for an August rate hike. This scenario might be mildly Sterling supportive," says Piet Lammens, an analyst with KBC Markets in Brussels.

Expectations for a no-change outcome were solidified following comments made by Bank of England Governor Carney in an interview with the BBC on the 19th April where he delivered a more sober assessment of recent economic trends, while alluding to the possibility that some members of the rate-setting committee were not fully on board with the notion of hiking in May.

This put paid for rock-solid expectations for a May interest rate rise which for much of 2018 had been running over 80%.

Expectations were hit further by the subsequent release of a weaker-than-expected Q1 GDP print, followed by disappointing PMIs for April released in the first week of May. This slowdown should see forecasts for both economic growth and inflation lowered in the Inflation Report which is due for release at the same event.

This capitulation in rate hike expectations has been blamed for the Pound's recent underperformance which was seen it relinquish highs near 1.16 against the Euro and just shy of 1.44 against the Dollar in mid-April.

The key question for markets now is whether or not the Bank will condition expectations for a rate rise at the August policy meeting, which happens to be the next meeting which has an Inflation Report attached to it.

"Today’s BoE meeting could see a host of outcomes, but a ‘hawkish hold’ is probably the best that Sterling bulls can expect. If the Bank really wants to move this year, then time is running out, since the EU summit in October limits its freedom of manoeuvre. Sterling looks primed for a short-term rebound in all but the most dovish of circumstances, but it may not last long," says market analyst Chris Beauchamp with IG.

Antje Praefcke, an economist at Commerzbank says it would constitute a major surprise if the BoE was to hike interest rates on May 10, but "it would have reason to do so, as the economy continues to grow and would not collapse if interest rates were to slowly move away from their crisis levels."

"In that case Sterling would appreciate," adds Praefcke.

Having punished the Pound of late, markets are now wary that the Bank might offer a 'hawkish' tinge to the May 10 meeting and in the hours leading up to the event we have seen Sterling bid higher.

"Pound buying from the 1.35 area, possibly cutting short Pound positions prior to the Bank of England. Certainly, the surprise would be an hawkish hold, an actual hike or indeed the inflation report looking beyond recent weakness," says Neil Jones, a foreign exchange dealer with Mizuho Bank Ltd. in London.

Foreign exchange strategist Jordan Rochester with Nomura Bank Ltd. is strategically 'long' Sterling, betting that messaging from the Bank of England is likely to got the currency's way.

"The main reason why we are confident going into the BoE meeting that this view will work is that in September of last year the BoE was faced with a credibility problem of wanting to raise rates reasonably soon but in a market that failed to price for them. So it introduced “coming months” into the statement to spur a steeper market curve. The Bank may again face such a problem if it were to err too much on the dovish side at next week’s Inflation Report, so we expect it to deliver a balanced statement that will keep each MPC meeting live," says Rocheester.

Nomura believe "the best is yet to come" for Sterling and are targeting a rise in the GBP/USD exchange rate to 1.41.

Analyst Stephen Gallo at BMO Capital Markets meanwhile favours the Pound's chances against the Euro, saying he does not expect the BoE to "make a decisive shift to a dovish policy stance that sharply reduces the implied odds of a H2 2018 rate hike."

BMO Capital therefore expect "a modest relief rally in the GBP," and they are looking to sell EUR/GBP in anticipation of a move lower towards the 0.8680.

Gallo argues GBP has in fact been rather stable against the Euro over recent weeks, an outcome that undercuts a common argument that the recent weakness in Sterling has been due to domestic factors.

"If Brexit issues are largely to blame for UK economic weakness in Q1, why has the Eurozone undergone a similar slowdown in activity?" asks Gallo. "FX investors are not in a position to conclude, without a shadow of a doubt, that the Q1 performance of the UK’s economy is the start of something sinister. Our view is that the MPC isn’t either."

The most likely scenario - a 45% chance - being envisaged by analysts at TD Securities is an 'hawkish hold' whereby the MPC pauses on raising interest rates, but not for long. Analysts see the MPC repeating the view that ongoing rate hikes remain "appropriate".

"While not firmly taking a side, the MPC suspects the Q1 slowdown was temporary, and assumes a growth rebound in Q2 with little change to the forecast beyond," says strategist James Rossiter with TD Securities. Under such a scenario the GBP/USD could rise to 1.3365, while EUR/GBP could fall to 0.8670.

However, those with impending Sterling payments to make should be wary of an unanimous vote to keep rates unchanged at 9-0, which Rossiter says will be a signal that the Bank is worried that the recent slowdown in growth is likely to be more persistent.

Peak investor pessimism towards the British Pound could be nearing say analysts at NatWest Markets. 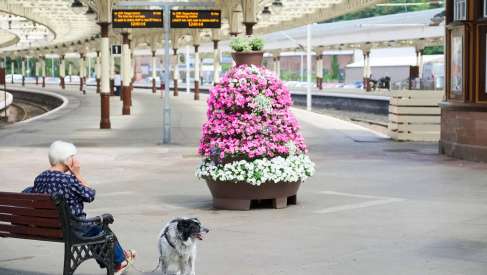 "The money that people do not spend on these services this week likely will be redeployed, either to next week, or to purchase other goods and services" - Pantheon Macroeconomics.

Pound Sterling: Signs of a Peak in Core Inflation Could Boost Fortunes against Euro and Do…

GBP fell in the immediate aftermath of the release of UK inflation data which came in largely as expected, but some crucial elements of the report were in fact softer and could ultimately prove supportive of the currency.