- Damage to Sterling may be limited though as analysts eye consolidation

- Bank of England tipped to raise rates in August by analysts

Pound Sterling has come under further pressure following the publication of yet another set of disappointing UK economic data.

Service PMI data from IHS Markit and the CIPS read at 52.8, which was well below the 53.5 expected by markets.

The disappointment adds to a now entrenched view that growth in the UK economy is stalling, which has in turn put paid to an interest rate rise at the Bank of England in May.

"The services PMI has failed to recover fully after its big drop in March, adding to fears that the underlying pace of growth in activity has slowed even further this year," says Samuel Tombs, Chief UK Economist with Pantheon Macroeconomics. "A weighted average of the manufacturing, construction and services PMIs in April is consistent with quarter-on-quarter GDP growth picking up only to 0.2% in Q2, from 0.1% in Q1."

Paul Hollingsworth, Senior UK Economist with Capital Economics says taken together with the construction and manufacturing surveys released earlier this week, the all-sector PMI points to GDP growth of about 0.3%, "suggesting that the economy is struggling to regain momentum."

The impact of the data on Sterling was notable, with the GBP/EUR exchange rate falling sharply to 1.1332 from 1.1356. 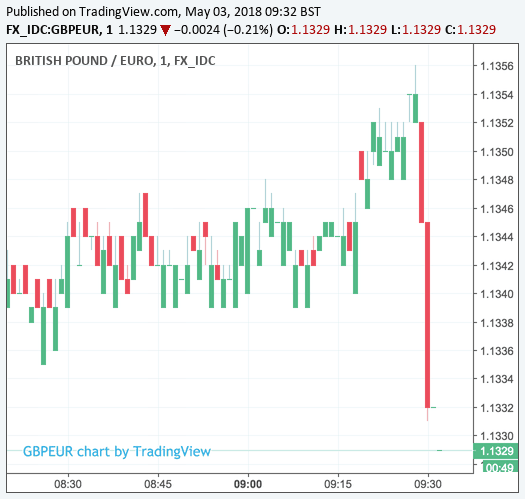 However, there is the chance that the immediate reaction to the disappointing data is knee-jerk in nature, and the Pound is being widely tipped to be due a period of consolidation following a troubled two weeks. 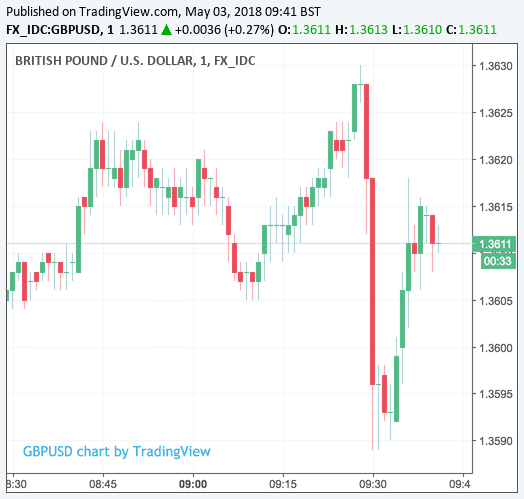 "GBP/USD’s sell-off is approaching the 200 day ma at 1.3538 and it is possible that this will provoke some consolidation. Intraday rallies are indicated to terminate at circa 1.3715/1.3815 and we have divergence on the intraday charts. We would therefore allow for some near term profit taking," says Karen Jones, a technical market analyst with Commerzbank.

Of the past 12 trading days, the Pound has fallen against the Dollar in 11 those days, and this leaves it looking oversold in the near-term. Société Générale's Kit Juckes notes "the 9-day GBP/USD RSI hasn't been this low since 2016. A pause in the sell-off seems likely."

Regarding the Pound-Euro exchange rate, Jones warns the Euro has the ability to extend a little further. The GBP/EUR rate could go to support at 1.1264, but Jones says it is unclear at this juncture as to whether the Euro can push Sterling below here. While above this support Jones will continue to target 1.1728.

UK data is back once again the key driver for the British Pound as foreign exchange markets have shifted their focus back to the question of interest rates, and more specifically, the future moves in global interest rates.

Expectations for the Bank of England to raise interest rates in May had driven a strong bid in Pound Sterling for much of 2018 until a slew of underwhelming economic data releases suggested to markets that this was too optimistic an expectation.

Foreign exchange markets were therefore eyeing the release of service sector PMI for guidance on whether or not the British Pound's recent sell-off should be extended, or whether the building of a floor under the currency is now justified.

IHS Markit report UK service providers signalled a modest rebound in business activity growth following the snow disruptions seen during March. However, aside from the low point recorded last month, the latest upturn in service sector output was the softest for just over a year-and-a-half. 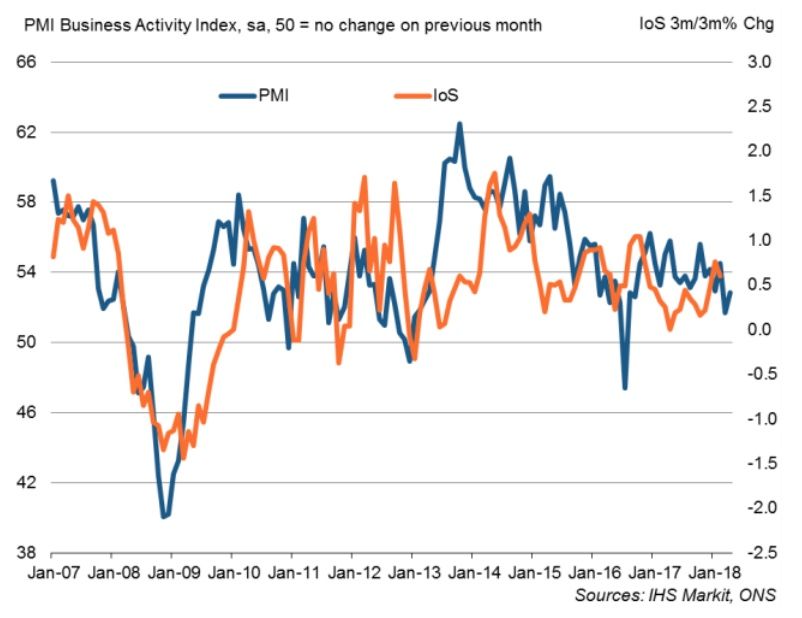 The PMI is a survey of business conditions within the services sector, which accounts for over 80% of UK economic activity and is therefore offers a true insight into where the economy is headed in the second-quarter of 2018.

A number of survey respondents noted that subdued consumer willingness-to-spend had held back business activity growth in April. Alongside the soft patch experienced by consumer-facing firms, there were also reports that concerns about the domestic economic outlook had acted as a brake on spending by corporate clients.

The rate of service sector employment growth moderated to its weakest since March 2017. Survey respondents noted that higher payroll costs and tight labour market conditions had weighed on staff recruitment in April.

Concerning the outlook, we are told an expected rebound in UK economic activity in the second quarter of 2018 now looks unlikely, and this in turn has implications for Bank of England interest rate policy, and by extension, the Pound.

"The services PMI was never going to be pivotal for the MPC’s interest rate decision this month, given that both GDP and inflation already had surprised greatly to the downside. But the PMIs’ weakness in April greatly reduces the chances of a “hawkish hold” decision, i.e. a no change vote accompanied by clear guidance that rates will rise again very soon.  Following today’s data, nobody can have strong conviction that the economy’s Q1 slowdown will be just a blip," says Pantheon Macroeconomics' Tobs.

If this assessment is correct, unfotunately for Sterling bulls, it appears that the Pound could be set for an extended period of weakness, or consolidation at best. "Recent weaker UK data and comments from BoE governor Carney highlight that the rate hiking trajectory is unlikely to be smooth. As a result, we believe the GBP could trade in a broad range," says a note concerning the British Pound's outlook from Standard Chartered.

However, for Paul Hollingsworth at Capital Economics, for the Bank of England and British Pound, what matters is the trajectory of wage growth, and the latest data confirms this is headed in the right direction. 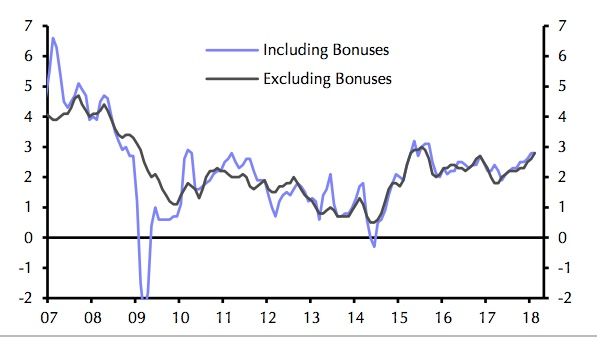 "Today’s survey further reduces the likelihood of an interest rate hike at next Thursday’s MPC meeting. However, with the survey noting that wage cost pressures in the services sector are building, the Committee is unlikely to want to wait too long before raising interest rates again," says Hollingsworth.

James Smith, an Economist with ING Bank agrees that wages ultimately matter, and as such an interest rate in 2018 is still on.

"Remember that the Bank of England is increasingly focused on combatting the threat of higher wage growth. Recent data has suggested that pay is rising more quickly (this latest PMI noted “higher salary payments”). We therefore still think policy makers have a preference for tighter policy, and they will be acutely aware that it could get more complicated to raise rates later in the year as Brexit talks heat-up," says Smith, adding:

"The big question for markets is whether the recent run of weak data is enough to write-off an August rate hike. For now, we suspect it isn’t. True, policymakers are likely to hold off on a rate rise next week - an increase now could be one headwind too many for the faltering consumer-facing sector."