The British Pound's sensitivity to broader risk sentiment was on display just hours ahead of a key U.S. Federal Reserve interest rate decision and that of the Bank of England a day later.

The Pound rallied alongside recovering global stock markets signifying an improvement in investor sentiment, although there is a strong possibility this is a mere relief rally within the broader trend lower.

The Pound to Euro exchange rate rose three quarters of a percent to quote at 1.1590, having been as low as 1.1464 earlier in the week.

"For some time sterling has been a bellwether of risk appetite which, given the small, open nature of the economy and the prominence of the UK's financial sector, is understandable," says Thomas Flury, a Strategist at UBS' Chief Investment Office.

The Pound suffered significant losses over the course of the previous 24 hours when a combination of domestic concerns merged with another stock market selloff to bring about fresh multi-year lows against both the Euro and U.S. Dollar.

Markets remain fragile in the face of expectations for a material rise in U.S. interest rates with the Federal Reserve expected to hike 75 basis points at their 19:00 BST update.

"A hit to global risk sentiment usually weakens GBP," says Mikael Milhøj, Chief Analyst at Danske Bank. "The UK runs a large current-account deficit, which makes the GBP vulnerable when capital flows fade; this keeps GBP at risk vs surplus-EUR in wake of a risk sell-off." 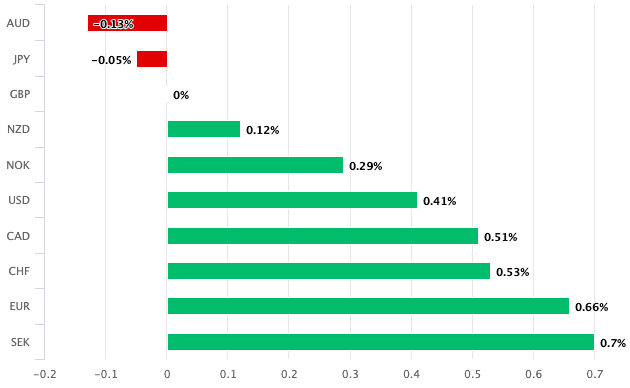 Above: GBP outperforms in relief rally.

However, we note in an earlier piece that some analysts say the Pound could rally against the Dollar if the market's expectations for future Fed rate hikes prove too aggressive.

U.S. stocks have now joined other global peers in entering a bear market as the drawdown on the post-pandemic highs continues.

"A bear market is the term used to describe the plummeting of financial markets by 20% or more from their most recent all-time high," says Nigel Green, CEO of deVere Group.

Rallies in both sentiment and the British pound will be viewed as temporary in nature until such a time as it is clear this bear trend has ended.

Members of the Bank of England's Monetary Policy Committee meanwhile today meet on Threadneedle Street to debate how to alter UK monetary policy in the face of surging domestic inflation, a slowing economy and, importantly, interest rate rises at the Federal Reserve. 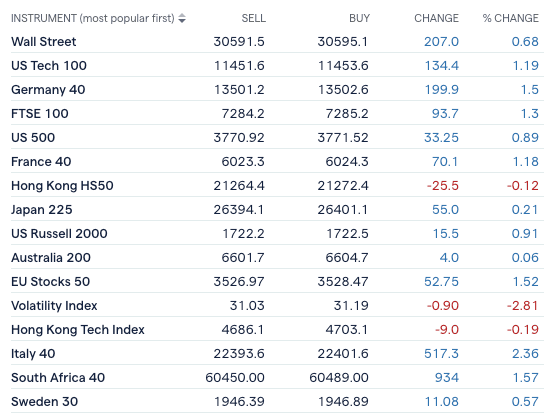 Above image courtesy of IG.

Their decision will be made known on Thursday at 12:00 BST.

With Pound Sterling under siege the Bank of England has little choice other than to deliver a rate hike that exceeds 25 basis points, according to economists.

"Since the principal cause of the current inflation is rapidly rising dollar prices on global markets, the Bank of England has no choice but to defend sterling. It will therefore follow what it expects the Fed to do," says independent economist Frances Coppola.

The Bank of England cannot deliver monetary policy in a bubble and will be acutely aware that outsized hikes in the U.S. will impact not only UK monetary conditions but also the Pound.

They must therefore be bold in the face of an aggressive Fed.

"Last time, it did not follow the Fed strongly enough, and sterling fell. So this time it must be more hawkish. I expect a BoE rate rise of at least 50 bps, probably more like 75 or 100," says Coppola.