Pound Sterling could be in with a shot at recovering against the Dollar if the Federal Reserve underwhelms market expectations at the release of their June policy decision, due at 19:00 BST.

The Fed will likely deliver a 75 basis point interest rate hike, but according to analysts at Western Union Business Solutions expectations for the scale of Fed hikes beyond June are starting to look excessive.

Money markets show a near certainty that 75 points of hikes are to be delivered, "it should be noted though, that given current aggressive market pricing, there is a risk that the Fed fails to deliver on its expected hawkishness," says George Vessey, Currency Analyst at Western Union Business Solutions.

Should the market reconsider expectations for the scale of further rate hikes i.e. by bringing down the expected terminal rate (which is essentially the peak rate expected in 2023) the Dollar could give back some recent gains.

Vessey says this could allow GBP/USD to extend its so-far tepid recovery from 28-month lows.

The call comes in the wake of the Pound to Dollar exchange rate slipping below 1.20 to test a low at 1.1934 on Tuesday. (Set yourself an FX rate alert here).

"In that case, the extent of the correction in USD and Treasury yields will be determined by the degree of hawkish guidance offered by the FOMC (via the Summary of Economic Projections and Fed Chair Jay Powell’s press conference)," he says.

The Pound-Dollar exchange rate remains caught in a determined downtrend and any relief rallies could yet prove to be brief as this trend extends.

"Sterling is licking its wounds after plunging to a 13-month low versus the euro and a 28-month low against the US dollar yesterday. Several headwinds persist, such as the UK’s higher inflation and lower economic growth outlook relative to its major peers, lagging rate expectations, and also a cruel injection of even more political angst," explains Vessey.

He describes the pace of the decline has "overwhelming".

Currency analysts note a number of headwinds facing the Pound, including ongoing tensions between the EU and UK over the Northern Ireland protocol and Nicola Sturgeon's unveiling of a new Scottish independence blueprint.

"The extension lower yesterday is being attributed to Scotland's First Minister Nicola Sturgeon announcing her intension for a new independence referendum. Political instability in the UK has been a dominant theme weighing on the pound over recent years and this fresh negative dynamic along with ongoing UK-EU trade squabbles adds to the growing list of uncertainties clouding sterling’s outlook," says Vessey. 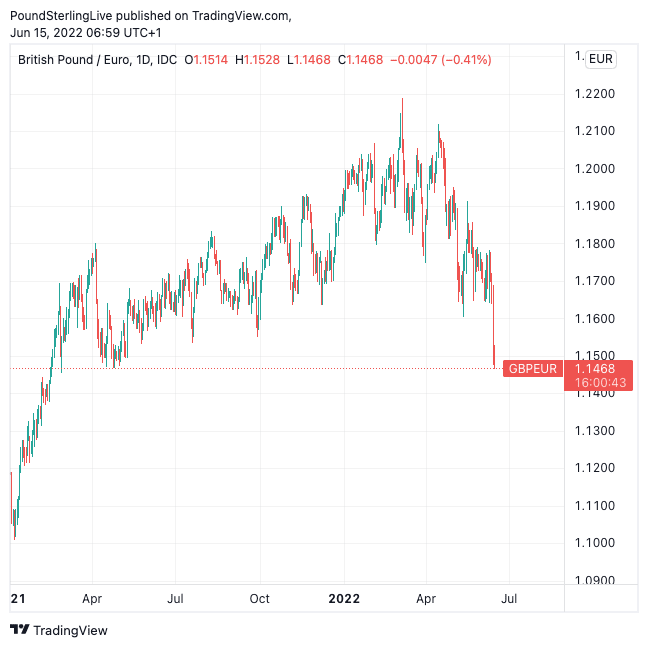 But the biggest risk event for the UK currency in the near-term comes in the form of Thursday's Bank of England meeting where it considers its next move on interest rates.

Markets currently anticipate a 25 basis point, but see a high likelihood of a more substantive 50 basis point hike in view of the aggressive stance adopted by the Fed and the UK's ongoing fight against inflation which reached 9.0% in April.

Although a more decisive 50bp hike could aid the Pound sentiment towards the Pound is likely to remain underwhelming.

"The last time GBP/USD sunk under $1.20, the currency pair slid all the way to $1.14 (albeit briefly). All eyes are on the weekly close to provide the next trend signal, but given how much sterling has depreciated recently, a short-term rebound can’t be ruled out. The Fed and BoE meetings will play a critical role," says Vessey.