A sell-off in global stock markets linked to a surge in global financing conditions was seen to be dictating currency moves ahead of the weekend.

The Yen, Franc and U.S. Dollar advanced while the Australian, New Zealand and Canadian Dollars - as well as Emerging Market names - shed value.

The Pound and Euro were left in the middle, advancing against the commodity and Emerging Market currencies but offering value to the Dollar, Yen and Franc.

Analysis from KBC Markets points a finger for the softness in global markets at the rise in sovereign bond yields, which raises the cost of global financing.

U.S. bond yields rose sharply through Thursday and into Friday as investors digested the Federal Reserve's mid-week message that a relatively rapid wind down of quantitative easing was now likely ahead of interest rate hikes in 2023.

"The Fed on Wednesday evening paved the way for a slightly more aggressive policy normalization campaign than anticipated. It took bond investors a night’s sleep before the message hit. But when it hit, it hit hard," says Mathias Van der Jeugt, analyst at KBC Markets. 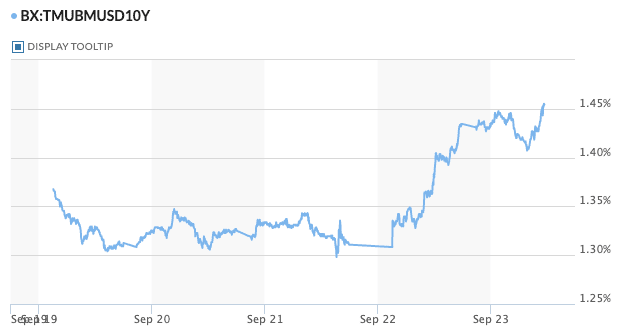 Above: The yield on US ten year sovereign bonds. Image: MarketWatch.

But it was not just the U.S. where bond yields were higher: they were higher in the Eurozone and the UK too.

The Bank of England on Thursday signalled a rate hike in early 2022 remains likely, with further hikes possible within the year.

UK bond yields understandably rose in the wake of the news.

"Bond yields are back up, with US 10-year up as markets continue to digest the increase in Fed tapering expectations. UK 10-year gilts at 18-month high after the BoE update on Thursday. The dollar is firmer vs majors," says Christian Gattiker, Head of Research at Julius Baer. 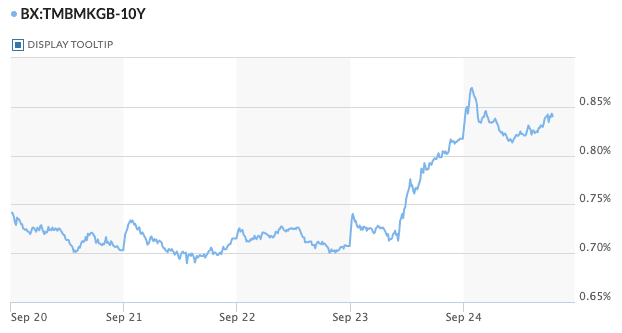 Rising bond yields would typically be supportive of Sterling but it is crucial to note that not only are UK bond yields rising, but so are bond yields elsewhere.

This ultimately negates much of the hawkishness coming out of the Bank of England and explains why the Pound has not powered higher. 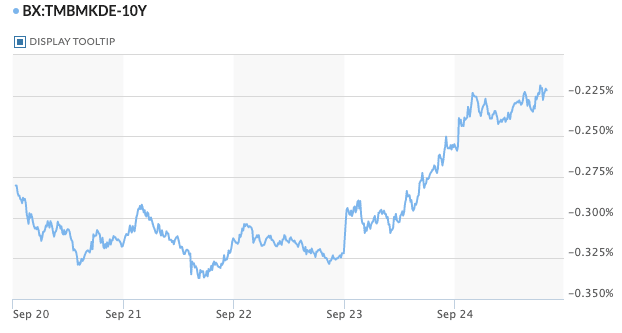 KBC Markets are also looking for German ten-year bund yields to rise back towards Year-to-Date highs before long.

"We connect the Bund repositioning to last week’s FT rumours on ECB policy. They suggested a 1.8% inflation forecast for 2024 in internal documents, implying that the ECB will follow other big central banks faster than many thought," says Van der Jeugt.

The cost of financing is rising and this poses a headwind to stock markets which have surged higher over recent months courtesy of the easy monetary conditions provided by central banks.

Take away some of that support and stock markets will understandably face headwinds.

With foreign exchange markets watching both bond yields and overall sentiment we find that the 'risk-on/risk-off' trade might be in control of direction for a while longer.

At the time of publication the Pound-to-Dollar was seen a third of a percent lower on the day at 1.3677 while the Pound-to-Euro exchange rate was seen flat at 1.1678.

The Euro-to-Dollar exchange rate was a quarter of a percent down at 1.17.