The Pound-to-Dollar exchange rate was close to 2021 lows and vulnerable to further losses after the Federal Reserve turned ‘hawkish’ in its guidance on quantitative easing and interest rates for the coming year.

Dollar exchange rates were higher and potentially on course to advance further after Chairman Jerome Powell revealed in Wednesday’s press conference that the Fed’s quantitative easing programme could end sooner and its benchmark interest rate be lifted earlier than previously suggested.

The Pound-to-Dollar rate was within inches of 2021 lows when trading near 1.36 but would risk sinking below it if Wednesday’s Fed decision leads to a market-wide rethink of the U.S. interest rate outlook ahead of the weekend.

"This does seem a hawkish shift from the Fed – especially since it was not so long ago that the Fed was telling us that rates would not be raised until 2024,” says Chris Turner, global head of markets and regional head of research for UK & CEE at ING.

“We suspect the dollar does regain the ground lost today – primarily against those currencies backed by central banks with a more relaxed attitude to inflation, i.e. EUR, SEK, CHF and also PLN," Turner wrote in a Wednesday note.

Wednesday’s Federal Open Market Committee (FOMC) policy decision was already enough of a hawkish surprise for the market even without the subsequent press conference in which Chairman Powell left little room for doubting that the U.S. interest rate outlook is shifting in favour of the Dollar.

Above: Selected responses by Chairman Jerome Powell to questions from reporters as September’s FOMC press conference.

The Fed highlighted in its regular policy announcement that if the economy continues to conform to expectations in the meantime, the bank is all but certain to begin winding down its $120BN per month quantitative easing programme before the curtain closes on 2021.

But the Fed also revealed in its quarterly dot-plot of policymaker forecasts that a majority of the FOMC now expect they’ll vote to lift the Fed Funds rate from near zero to around 0.50% or more before the end of 2022, which is more than a year earlier than previously guided for. They also revealed a median expectation for the Fed Funds rate to rise to 1% in 2023 and 1.75% in 2024.

“All but one official now has some form of tightening in their projections by the end of 2023—versus five who didn’t have a hike as of June,” says Kevin Cummins, chief U.S. economist at Natwest Markets.

“Despite the softer-than-expected inflation prints since the June FOMC meeting, officials' formal assessments of risks around inflation remained firmly tilted to the upside,” Cummins wrote in a Wednesday note.

While the Fed’s statement and projections are a game changer for the U.S. rate outlook on their own, remarks made by Chairman Powell in the press conference after were most insightful and confirmed the hawkish shift in the bank’s stance.

“I would say in my own thinking the test is all but met. So I don’t personally need to see a very strong employment report. But I’d like to see a good one. A decent employment report. It’s not to be confused with the test for lift off, which is so much higher,” Powell said in the press conference.

“Half of FOMC participants forecast that these favourable economic conditions will be fulfilled before the end of next year. As a result the median projection for the Fed Funds rate lies slightly above the effective lower bound in 2022,” Powell later said.

Powell’s responses to questions asked by the media suggested that he and other members of the FOMC policy setting committee increasingly view the jobs market and inflation criteria for a QE tapering announcement as having been achieved.

His responses also suggested that many on the FOMC are becoming more open minded about the idea that they may need to lift interest rates faster than was thought necessary on prior occasions in order to ensure that inflation returns to the 2% average target over the coming years.

It remains to be seen what European traders will make of the Fed’s message but the bank’s projections suggest that it will be faster raising interest rates in the coming years than the market had given it credit for, which puts a feather in the Dollar’s cap at a point of technical vulnerability for Sterling. 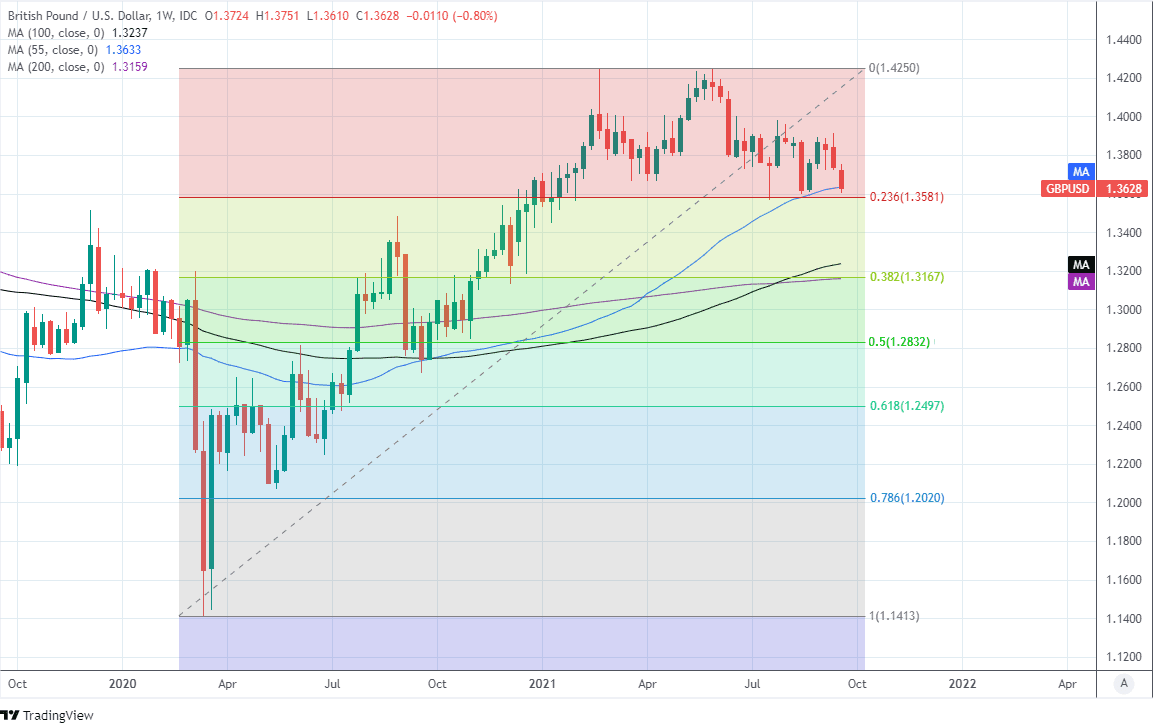 Above: Pound-to-Dollar rate shown at weekly intervals with 55-week moving-average and Fibonacci retracements of 2020 recovery indicating possible areas of support for Sterling.

“This turns the spotlight back to the lower end of the converging range from late June, seen starting at 1.3628 and stretching down to 1.3571/67.

Whilst we would look for a fresh hold here again for now, an eventual move below 1.3571/67 would resolve the range lower for the completion of a bearish “triangle” continuation pattern,” says David Sneddon, head of technical analysis at Credit Suisse.

Sneddon and the Credit Suisse team say any sustained Pound-Dollar rate decline below 1.3571 would indicate that “ a more meaningful decline” is likely, which could potentially culminate in Sterling trading as low as 1.3135 in the months ahead.

Much about the outlook for Sterling now depends on how the Dollar responds over the course of Thursday and Friday to the Fed’s new message, as well as on how, if at all the Bank of England (BoE) responds to recently disappointing GDP and retail sales data in this Thursday’s policy announcement.

“If there is any 'hawkish' shift relative to August, we think the MPC may moderately heighten the tone around price developments (i.e. monitoring price developments very closely, etc.),” says Stephen Gallo, European head of FX strategy at BMO Capital Markets.

“IMM/CFTC positioning data suggest that FX investors are moderately short of EURGBP, and a gradual pace of BoE interest rate hikes has been incorporated into various UK curves for some time. As such, we think the risk of a 'hawkish shock' for investors from the BoE this week is low,” Gallo wrote in a Wednesday research note.