"Recent public comments from BoE MPC members suggest risks to our policy rate forecasts and Sterling projections may be skewed to the upside," says Cahill.

Foreign exchange markets are highly sensitive to expectations on the future of a country's interest rate environment, when higher rates are anticipated that country's currency tends to appreciate.

Debate on the outlook of the UK currency has intensified following a revelation by Bank of England Governor Andrew Bailey on Sept. 09 that he believed the minimum economic conditions for a rate rise had now been met.

Furthermore, this view was shared by three other members of the Bank's Monetary Policy Committee (MPC), including Deputy Governor Ben Broadbent, suggesting a rate rise is closer than the market had initially anticipated.

The comments set the ground for the Pound-to-Euro exchange rate to embark on a run of five days of successive gains which took it as high as 1.1750 on Tuesday.

The Pound-to-Dollar exchange rate reached a high at 1.39 as it extended a trend higher from lows at 1.36, which were rejected on August 21. 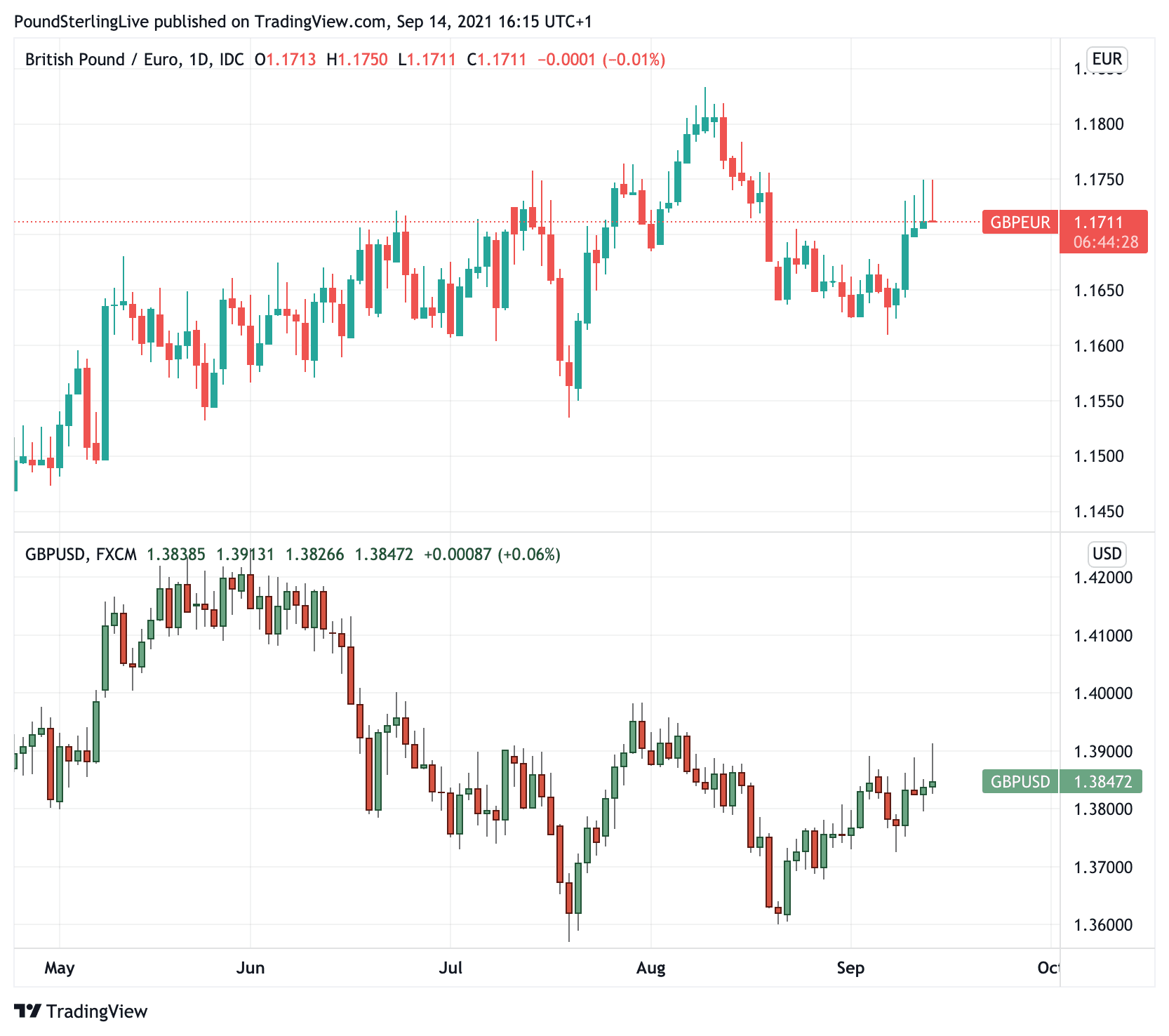 Goldman Sachs' current baseline forecast is for the first Bank Rate increase in the third quarter of 2023.

"The comments from Bailey and Broadbent may imply higher risks of an earlier rate increase than we previously had thought," says Cahill.

Analysts at HSBC are however more cautious on Sterling's outlook.

In a new strategy briefing HSBC's Head of European FX Research, Dominic Bunning, says there are risks ahead for the UK currency.

"GBP already appears to be pricing in the idea that the Bank of England will be amongst the first G10 central banks to hike rates, likely in the middle of next year. Indeed, the currency has appeared to price in even more positivity than the rates market in the last 6-9 months," says Bunning.

"This creates asymmetric downside risks, in our view," he adds.

HSBC notes the tempo of UK data releases has turned softer over recent months, reflecting the summer slowdown in growth that has been well highlighted by various data and finally confirmed by July's GDP report out last week.

However it is unclear whether HSBC are accounting for more recent data that suggest these growth rates might be picking up once more.

A shared concern amongst economists is the looming impact to the labour market that will be caused by the ending of the government's furlough scheme in September.

"The economic news may be at risk of worsening further as government support mechanisms put in place during the pandemic start to lapse," says Bunning.

The government has gradually been reducing the support it offers to workers whose jobs have been impacted by the pandemic with a final termination of that support due this month.

The UK labour market is nevertheless entering this deadline with solid momentum, with official data out on Tuesday showing full-time employment levels are now back to where they were just before the Covid crisis.

Furthermore, there are a record number of vacancies on offer for those returning to the jobs market.

But there were still 1.6 million staff on furlough at the end of July, and the scheme’s scheduled end could result in a sudden spike in unemployment as those returning to the labour market might struggle to fit the jobs on offer.

Economists are expecting the unemployment rate to duly pick up, although the severity of the increase is a source of uncertainty.

"If the labor market performs better than we anticipate over the coming months, it could result in earlier rate increases and a stronger GBP," says Cahill.

Although Goldman Sachs are hinting that a potential lift to their forecasts for Sterling are in the offing, for now they maintain a Pound-Euro exchange rate forecast of 1.165 on a three- and six-month horizon.

HSBC maintain a year-end forecast for Pound-Dollar to fall to 1.34, "and believe this view is further supported by a broader turn in expectations for the USD that we have seen in recent months," says Bunning.