UK full-time employment levels are now back to where they were just before the Covid crisis, according to the latest labour market statistics from the ONS.

The number of payrolled employees showed another monthly increase to 29.1 million in August 2021, returning to pre-coronavirus pandemic (February 2020) levels. 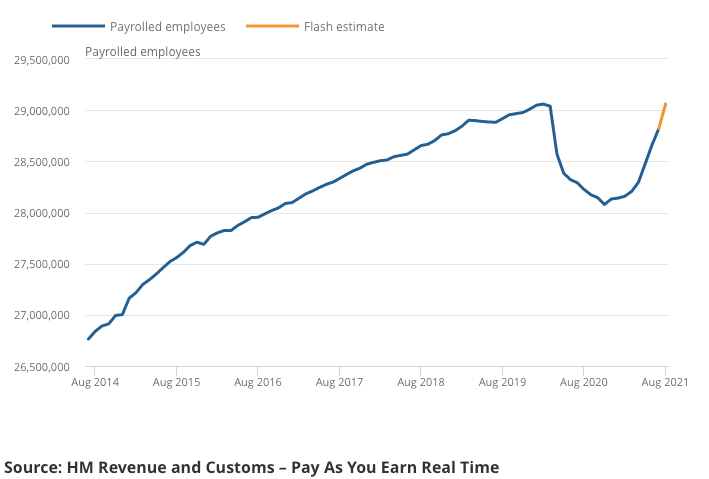 Above: Payrolled employees returned back to pre-crisis levels.

Average earnings (bonus included) increased 8.3% in July, ahead of the 8.2% expected by the market.

Wage growth is expected by economists to fall back again (as 'base effects' diminish), but for now this wage growth points to higher domestically generated inflation levels, which the Bank of England will take notice.

The Bank looks set to raise interest rates in the first half of 2022, an expectation that has supported the value of the Pound through recent months.

"The pound has been bolstered this morning by another stellar set of labour market data increasing the conviction level," says a note from the FX trading desk at JP Morgan in London. "Nothing here to derail our more positive view on the pound."

Some of this wage strength could lie with strong demand for workers at UK businesses as the ONS revealed the number of job vacancies in June to August 2021 was 1,034,000, which is the first time vacancies have risen over 1 million since records began.

The scale of vacancies should diminish concerns that the ending of the government's furlough scheme in September will materially lift unemployment.

In fact there are now 249K more vacancies than in the pre-pandemic period of January to March 2020.

"The latest data reveal two positive labour market milestones - the number of employees on the payroll reached pre-pandemic levels in August and the number of vacancies surpassed one million for the first time since records began in the three months to August," says Hannah Audino, economist at PwC.

All industry sectors increased their number of vacancies said the ONS, but the largest increase was seen in accommodation and food service activities, which rose by 57,600 (75.4%).

The latter could be particularly important in understanding why vacancies are not being filled. 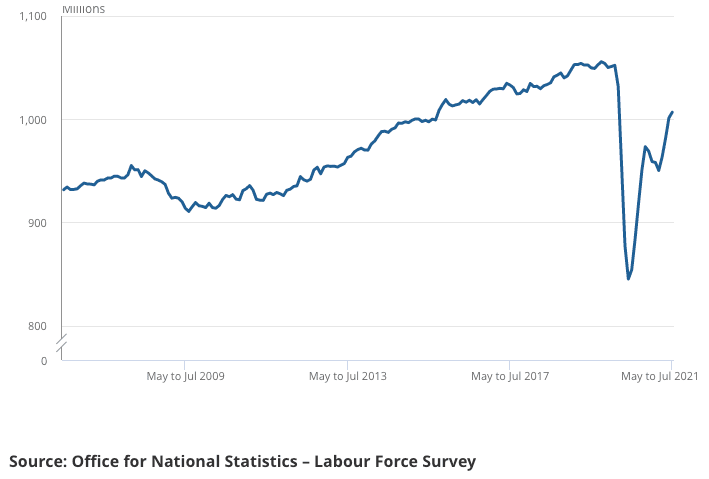 Above: Hours worked in the UK.

"Today’s figures confirm that the jobs recovery is continuing to gain speed. However they also show that we’ve seen the biggest fall in the size of the labour market since the early 90s recession," says Tony Wilson, Director at The Institute for Employment Studies.

He says there are officially still more than half a million fewer people either in work or looking for work than before the pandemic began, "although furlough will be pushing the actual figure closer to a million."

"Continued frictions in matching workers to job openings and uncertainty around how the economy will adjust to the end of furlough - with around 1.5 million people still on the scheme - might moderate the recovery in the labour market in the coming months," says PwC's Audino.

Jack Kennedy, UK economist at one of the UK's largest jobs websites, Indeed, says there is "a lack of urgency among furloughed workers to look for work".

There were still 1.6 million staff on furlough at the end of July, and the scheme’s scheduled end could result in a sudden spike in unemployment he warns.

Surveys conducted by Indeed find nearly half of those on furlough are not open to searching for a new job and a high proportion say they expected to go back to their normal job.

"It remains to be seen if this reticence turns into a sudden rush for jobs as some discover this is not the case and that they will need to start actively searching," says Kennedy.

Consultancy Pantheon Macroeconomics says the ending of furlough will lead to an increase in the unemployment rate from 4.5% in the third quarter to 5.0% in the fourth quarter.

What's more, many furloughed staff that return to their old jobs are expected to receive fewer hours than they desire.

"The resulting increase in labour market slack should ensure that wages do not keep up with inflation over the next year," says Samuel Tombs, Chief UK Economist at Pantheon Macroeconomics.