Timely economic activity data from the ONS suggests the UK economic rebound gathered pace into early September, suggesting the recovery might pick up again into year-end.

An experimental near-term data series from the ONS reveals spending on credit cards increased by 6 percentage points in the week to September 02, reaching 99% of its February 2020 average.

The data will be gleaned by economists to asses whether a slowing in the rebound over the summer months has given way to higher growth rates, something other surveys are hinting at.

"The bulk of the gains from the reopening of the UK economy are now behind us, so we’re entering a tougher phase of the recovery. But the promise of strong rebounds in consumer spending and business investment mean our forecasts are still bullish," says Andrew Goodwin, Chief UK Economist at Oxford Economics.

CHAPS data from the Bank of England is being trialed by the ONS as a faster indicator for estimating UK spending on credit and debit cards.

It gives an insight into consumer behaviour and economists use it to assess how the UK recovery is progressing:

As can be seen there is a slight uptick in the most recent numbers.

But it will be next week's data series that will be of significant importance given it will capture the 'back to school' effect of the week commencing September 05.

It was reported that Monday saw significant increases in traffic as workers returned to their office and suggests a post-summer 'back to school' effect could herald a more decisive return to normality for the UK economy. 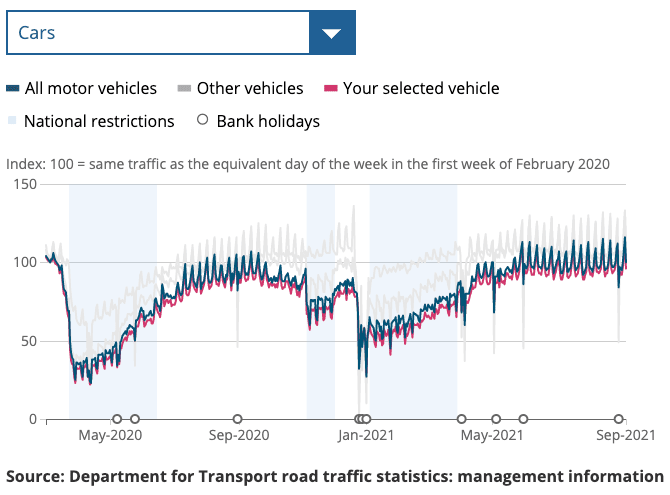 Transport for London reported morning trips on the tube were up 17% on the previous week, and buses saw 39% more passengers.

The ONS reports the volume of motor vehicle traffic on Monday September 06 was at 100% of its level in the first week of February 2020.

Transport for London data showed that in the week ending September 05 2021, the seasonally adjusted average count of traffic camera activity for pedestrians and cyclists in London had increased by 5% from the previous week to 129% of its pre-pandemic level (Transport for London).

Another key indicator was that of seated diners from OpenTable, however this week's data series has been distorted by the August bank holiday and we will therefore be interested in seeing next week's figures to give a clear assessment if the return of workers to offices has helped the sector.

Cases still remain high but an acceptance that the disease is becoming endemic and that vaccines protect against severe disease might be reflected in consumer behaviours.

The ending of self-isolation rules on August 16 meant that people could go about their daily lives without the fear of being 'pinged' by the NHS app with instructions to isolate having been in proximity of a carrier of Covid.

This coincides with a seasonal trends of schools reopening and parents returning to work.

But scientists warn that Covid cases could increase again in Autumn as is commonly the case with these types of respiratory viruses.

The UK has a high prevalence of Covid and any surges in cases could place pressure on the NHS.

Therefore the recovery could yet be upended by a resurgence in the virus.

"Uncertainty about the virus, and the impact of labour and component shortages are key concerns," says Goodwin.

Bank of England's Pill Steers a Path Towards Rate Hikes

All the market really wanted to know was whether he falls into the 'hawkish' or 'dovish' camp on the Bank's Monetary Policy Committee (MPC).

Increases in fuel and food prices mean people will have to choose between eating and heating in the coming months and this will likely be worse for households with children, says the Food Foundation.