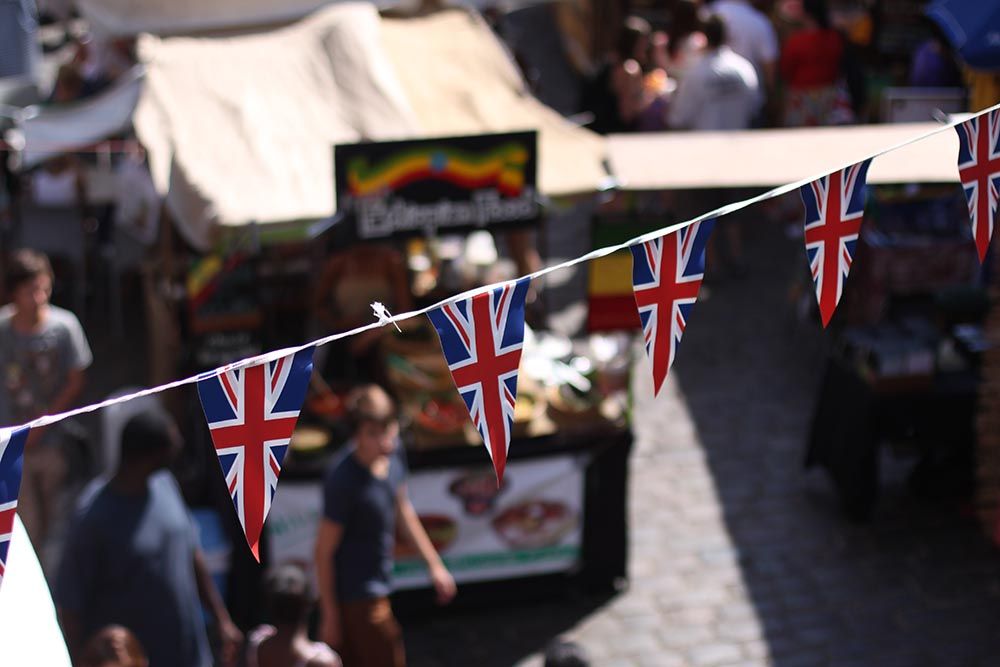 The British Pound could retain support amidst expectations that a recent slowdown in UK economic growth will give way to a stronger expansion once more, driven by increasingly confident consumers.

A new near-term survey of UK business activity shows that 60% of businesses in the leisure and hospitality sector are projecting a surge in revenue over the August Bank Holiday weekend, with 13% prepping for the busiest Bank Holiday in a decade.

According to the Barclaycard Payments SME Barometer, confidence among small and medium sized businesses is returning to pre-pandemic levels, with 40% planning to hire additional staff over the next 12 months.

Confidence returns amidst unremarkable Covid-19 case trends and the ending of the restrictive test and trace policy in the middle of August.

The findings from Barclaycard come just a day after the CBI said their regular Distributive Trades survey of retailers revealed retail sales in the UK grew at the sharpest pace since December 2014 in the year to August.

"With the recent distributive trades survey data suggesting the UK recovery narrative, driven by the consumer, remains in play we remain biased towards looking for EUR/GBP to trade lower," says Jeremy Stretch, Head of FX Strategy at CIBC Capital Markets.

The Euro has gained on the Pound over the past two weeks, with EUR/GBP peaking at 0.8593 (Pound-to-Euro bottoming at 1.1637), but a more stable global investor environment has this week helped Sterling regain some poise. 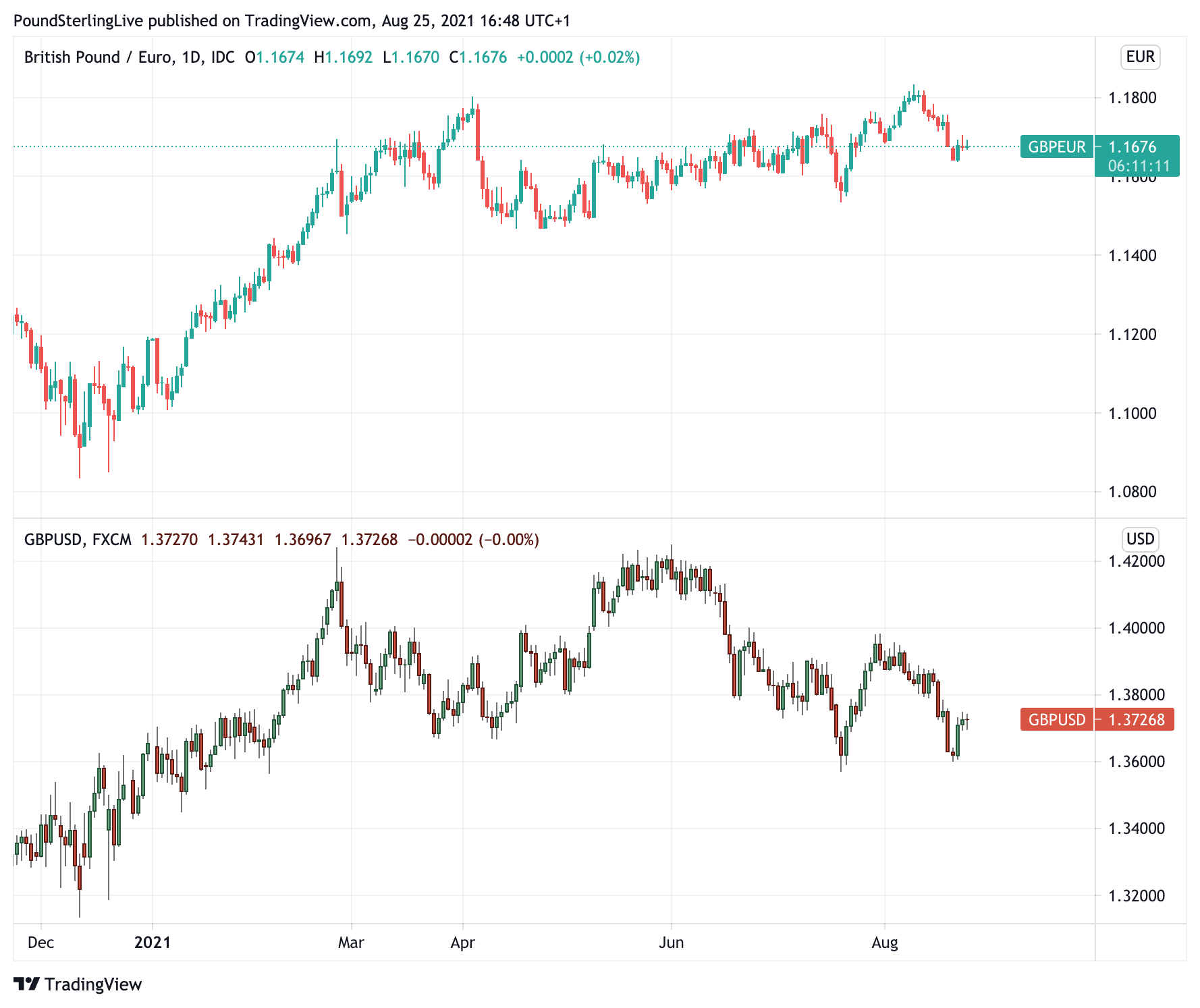 Short-term volatility in Sterling is being driven by global sentiment, but where the Pound ultimately ends 2021 rests with UK economic growth and Bank of England policy expectations.

Pound Sterling endured a rapid advance in the opening three months of 2021 as markets adjusted their expectations for the UK economy amidst a rapid improvement in the Covid situation - courtesy of a rapid vaccine rollout - and growth expectations.

But the Pound's rally soon stabilised against the Euro and the currency has gone into reverse against the Dollar over recent weeks, with some strategists saying cooling UK economic growth expectations are in part to blame.

Therefore should the economy start to deliver expectation-beating economic reports once again the Pound could rediscover some of the support lost over the summer period.

The Bank of England is expected by the market to raise interest rates in 2022, but as we note here, the timing of the rate rise must come forward and/or more interest rate rises must be expected beyond 2022 for the Pound to rediscover meaningful upside traction.

For this to happen the economy must grow at a healthy clip and the labour market must continue to improve, sending wages higher in the process.

Official data out last week revealed job vacancies in the UK hit a record in July while wages soared by 7.4% between April and June, leading to expectations for rising inflation.

It is in the Bank of England's remit to ensure inflation is kept close to 2.0% on a long-term basis, therefore any signs that inflation is heading for levels in excess of 2.0% for a protracted period of time could invite a more aggressive interest rate profile in the UK.

This would be supportive of the Pound relative to those currencies belonging to countries or regions where growth and inflation are expected to be less robust.

"With construction witnessing a 6.7% pay increase between February and July the BoE narrative of inflationary pressures proving temporary risks being tested. As a consequence we remain mindful of mid-2022 rate expectations being pushed up," says Stretch.

Economists at Investec this week lowered their growth forecasts for the UK economy to 6.7% for this year and 5.2% for 2022, but reiterate "there still appears to be plenty of momentum in activity".

"Not only do consumers have ample savings, but upbeat business sentiment may encourage firms to invest more too," says Philip Shaw, an economist with Investec.

Foreign exchange strategist Kit Juckes at Société Générale meanwhile says he is still eyeing a move higher in the GBP/EUR exchange rate towards 1.19-1.22, "in due course".

A regular briefing from JP Morgan's trading desk says they still like buying the Pound against the Euro, looking to sell Euro strength and target a move in EUR/GBP back to below 0.85. (A move higher in GBP/EUR back above 1.1765.)

Near-term movement in the foreign exchange market will meanwhile lie with the commencement today of the Jackson Hole central banking symposium where the U.S. Federal Reserve will likely touch on the all-important issue of ending its quantitative easing programme.

The process - referred to in financial circles as tapering - will see the Fed reduce its quantitative easing programme which could act as a headwind on U.S. and global economic growth, but is at the same time seen as supportive of the Dollar.

Roberto Mialich, FX Strategist with UniCredit says for the Pound, Euro and Dollar the very near-term outlook strictly depends on the message Powell delivers in his Friday address to the conference.

The foreign exchange market wants further insights into the timing of the Fed tapering on the back of recent strong payrolls numbers in the U.S. and the latest FOMC minutes.

But, the picture is muddied by a recent uptick in Covid cases in the U.S. and signs economic growth is slowing.

The message could therefore offer some volatility for exchange rates.

"Indications that the US central bank is still not rushing on the tapering front ahead of the 21-22 September FOMC meeting amid fears that delta variant developments could curb the US economic expansion will probably prove USD-negative and take further shine off the greenback," says Mialich.

However, the analyst says price action in the past few weeks suggests that the 1.18 area for EUR/USD and 1.38 for GBP/USD may remain capped for now.