The British Pound was tipped by foreign exchange analysts to remain supported in the wake of some better-than-expected job data out of the UK, although the currency was seen to be under some near-term pressure amidst a bout of selling on global markets.

Employment headlines are supportive of the Pound which is one of the best performing major currencies of the past month: the Office for National Statistics (ONS) on Tuesday reported the unemployment rate had fallen to 4.7% in June, a surprise to a market that was expecting it to remain at 4.8%.

The improvement was driven by a rise in jobs of 95K in the three months to June, a stronger outturn than the 75K the market was looking for and a marked improvement on the previous reading of 25K.

But for foreign exchange markets perhaps the eye catcher was the sharp rise in wages: June's Average Earnings Index - with bonuses included - stood at 8.8%, which is above the 8.6% the market was expecting and the 7.3% reported in May.

This was a new record for this data series and suggests non-external inflationary pressures might be building, which has implications for Bank of England policy.

The number of payroll employees meanwhile showed another monthly increase, up 182K to 28.9 million, in July. 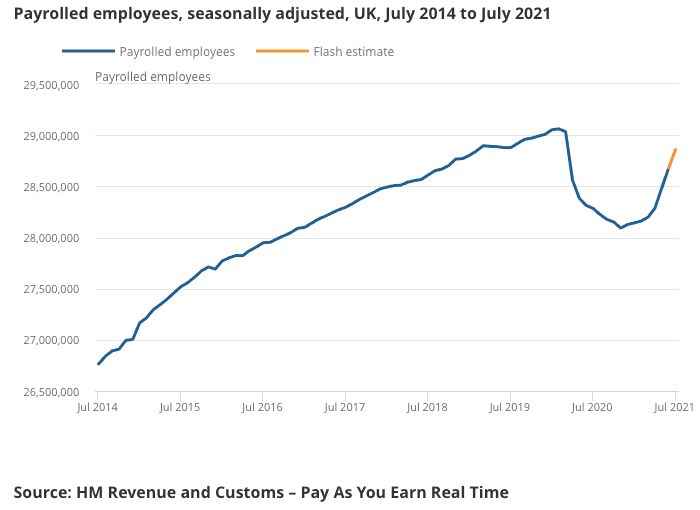 However, Sterling was unable to benefit from the data owing to an ongoing selloff in global stock markets. Regular readers of Pound Sterling Live will recall that stock market declines tend to correlate with weakness in the UK currency against the likes of the Euro, Dollar, Yen and Franc.

The broader market trends that are pushing down on GBP/EUR and GBP/USD are linked in a large part to the growth of Covid cases in Asia that has resulted in tighter restrictions in economies such as China, posing headwinds to global growth.

"The investor mood remains sour in Asia on the back of concerns of the spread of the delta variant as well as signs of slowing Chinese growth following weak China data on Monday," says Valentin Marinov, Head of G10 FX Strategy at Crédit Agricole.

Understandably, the Pound is doing better against Asia-focussed currencies, particularly the Australian and New Zealand Dollars.

Nevertheless, the domestic backdrop bodes well for Sterling to remain supported over the medium-term:

"The GBP is holding on to most of recent gains on the back of a strong labour market, improving growth outlook and repricing of BoE expectations," says Magne Østnor, a markets strategist at DNB Bank ASA. 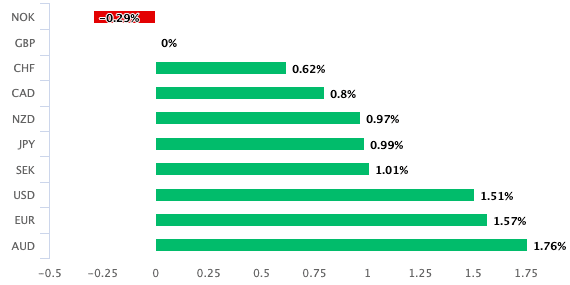 Above: GBP is the second-best performer of the past month.

The ONS says there were an estimated 953K job vacancies in May to July 2021, a record high, having grown by 290K compared with the previous quarter and 168K more than its pre-pandemic level (January to March 2020).

The outlook for the labour market therefore remains constructive given the number of jobs available which will presumably be filled at greater rates once the government's employment support scheme ends in September.

The findings could go some way in easing any fears at the Bank of England that the economy will suffer a setback once the government's jobs support scheme ends, pushing unemployment rates higher and dealing a set back to consumer confidence.

"Given wage growth and given the MPCs willingness to hike rates before completing tapering of asset purchases, a 2022 rate hike isn't impossible. It's also priced-in. EUR/GBP can resume its downtrend, when risk sentiment recovers," says Kit Juckes, the head of currency research at Société Générale. 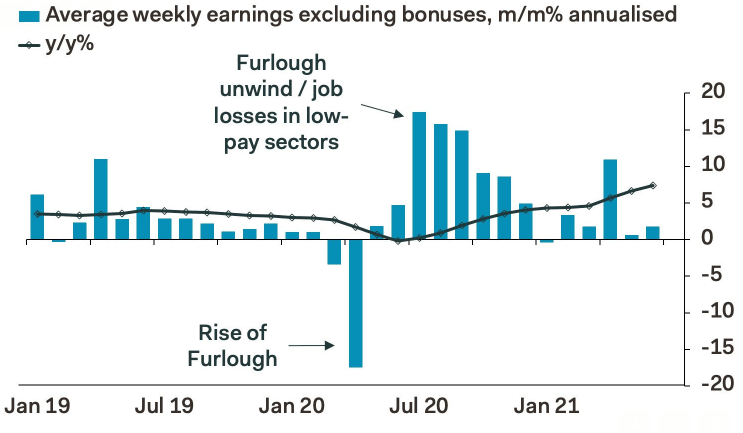 With jobs, wages and vacancies on the up the Bank of England could now find that the spare capacity remaining the economy is less than they expected, suggesting the door is open to a 2022 interest rate rise.

"With 'hidden' slack scarce - for instance, the number of people inactive but who say that they would like a job was below its pre-Covid level in June - the unemployment rate likely will fall a little further in Q3," says Samuel Tombs, Chief UK Economist at Pantheon Macroeconomics.

Economists at JP Morgan have brought forward the date they see 'lift off' in rates at the Bank of England based on the labour market data, saying the first rate rise will come in the second quarter of 2022 which ins six months earlier than they had initially envisaged.

Economists at the bank says the official three month smoothed unemployment rate is now on track to beat virtually all expectations and show a material decline in the third quarter of 2021.

"This would surpass even the BoE’s relatively optimistic forecast published only a couple of weeks
ago. The BoE didn’t expect to see the unemployment rate drop to 4.4% until 3Q22, at which time it signalled it would probably start to raise rates," says Allan Monks, an economist at JP Morgan.

Analysts say this waning spare capacity - or 'slack' - is ultimately supportive of the Pound's outlook as it pressures a more proactive stance at the Bank of England.

"While data remain hard to read, data surprises have largely come out positive since the UK’s 19 July ‘Freedom Day’. If data momentum were to continue, we could see further outturns supporting GBP, especially against G10 funders such as the EUR and CHF," says Marek Raczko, an analyst at Barclays.

Total actual weekly hours worked in the UK increased by 50.9 million hours from the previous quarter, to 1.00 billion hours in April to June 2021.

The ONS says this uptick coincided with the relaxing of coronavirus lockdown measures, which had stalled the recent recovery in total hours.

However, this is still 4.8% below pre-pandemic levels

While the labour market is heading in a direction consistent with a strong recovery, and potentially higher interest rates at the Bank of England in 2022, some uncertainty still lingers.

The ONS' Business Impact of Covid-19 showed that 3.7% of staff still were furloughed for at least some hours in the two weeks to July 25.

This despite all restrictions largely being lifted (save for some sectors such as travel which remains well below capacity owing to the UK's restrictive border policies).

"Many employers either will make these staff redundant or force them to accept fewer hours than they desire," says Tombs.

Pantheon Macroeconomics maintain an expectation that the unemployment rate will rise to 5.2% in the fourth quarter of the year, suggesting the strong run of positive outturn will soon end and labour market statistics could therefore turn into a headwind for Sterling.

Gregory says the higher wages on offer are symptomatic of labour shortages, "but underlying pay pressures were reasonably contained overall".

"We suspect that beyond the next 6-12 months most of these shortages will wane," says Gregory.

But Capital Economics are of the view the UK's unemployment rate has already peaked at 5.2%, reached in December 2020.

"We still think that a significant rise in underlying wage growth and a rise in interest rates won’t happen until the middle of 2023. The figures, however, suggest that the risks are tilted towards wage growth coming in a bit higher next year and the MPC raising rates a bit sooner than we anticipate," says Gregory.