The British Pound's major downside risk in the near future is a turn lower in global stock markets according to analysts, confirming global risk sentiment to be one of the key external drivers of the UK currency.

The Pound retreated from multi-month highs against the Euro and fell back against the U.S. Dollar on Thursday in sympathy with a generalised bout of risk aversion amongst global investors who appear to have been spooked by some racy U.S. inflation data.

The Dollar was bought and stocks sold after U.S. PPI inflation rose 1.0% Month-on-Month in July, far exceeding the 0.6% the market was expecting.

The data suggests U.S. inflation will linger at high levels for some time yet, inviting the prospect of a tightening of monetary conditions at the U.S. Federal Reserve over coming months, a move that would create potential headwinds to U.S. and global economic growth.

The Pound-to-Euro exchange rate slipped back below the 1.18 level having been as high as 1.1833 earlier in the week, the Pound-to-Dollar exchange rate extended its August decline to quote at 1.3833. 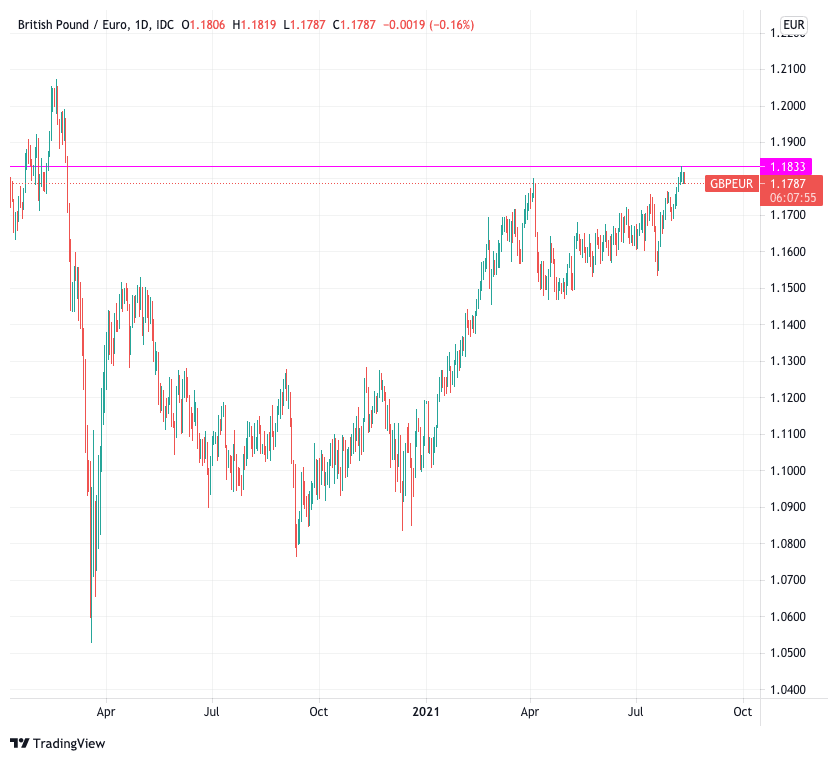 Above: GBP/EUR is still in the process of recovering 2020's Covid-inspired sell-off.

While UK fundamentals are broadly supportive - as confirmed by Thursday's release of better-than-expected GDP data - the global picture still matters for the Pound: when stock markets suffer investor nerves the can often find itself on the back foot.

"What is likely to matter more for EURGBP during the balance of August is the extent of risk appetite in global financial markets. We would say that this factor, in the context of investor positioning, has been the biggest detriment to further downside in the pair," says Stephen Gallo, European Head of FX Strategy at BMO Capital Markets.

According to new researcher from HSBC, the Euro is increasingly becoming a 'risk off' currency and less of a 'pro cyclical' currency.

What this means is the Euro is a beneficiary against the likes of the Pound when global investor sentiment deteriorates.

"For many years, the EUR was seen as a cyclical play, which benefited from strong global growth. However, the last decade or so has seen overseas asset accumulation outstrip inflows from foreign investors. This could start to change the way in which the EUR behaves. One rationale for the safe haven behaviour of the likes of the CHF and JPY is that they have sizeable foreign assets that can be repatriated during times of crisis," says Paul Mackel, Global Head of FX Research at HSBC.

Two themes matter for markets: the spread of the Delta variant of Covid-19 and an upcoming shift in policy at the U.S. Federal Reserve.

Pressure is growing on the Fed to reduce monetary support to the economy (an obvious negative for investors) on the basis that inflation is now well above their 2.0% target and some say it is likely to stay this way for an extended period of time.

Those arguing inflation will be more persistent than the Fed expects will point to the PPI data as confirmation, given PPI reflects inflation at America's factories and a portion of this pressure is ultimately passed onto consumers and is reflected in CPI readings. 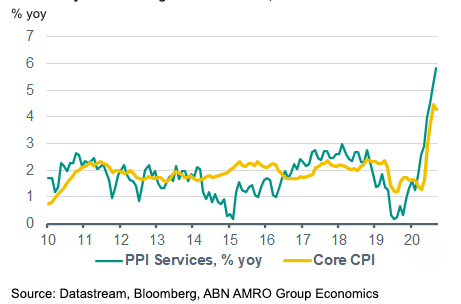 "For traders, the concern over rising inflation comes in relation to monetary policy, with the Fed likely to remain concerned that the prolonged period of elevated prices could necessitate a swift tapering strategy," says Joshua Mahony, Senior Market Analyst at IG.

Wednesday saw the release of core CPI inflation of 0.3%, which was below investor expectations and therefore provided a boost to those arguing inflation will prove temporary.

The Dollar fell in the wake of the data.

But the reversal in fortunes for the Dollar just a day later confirms just how sensitive markets are to the whole inflation/Fed dynamic, a story which promises further volatility over coming weeks.

The overall trend in markets nevertheless remains higher and investors have been inclined to look through dips as ultimately temporary, which suggests the trend in both stock markets and various Pound exchange rates remains up.

"With equity markets hitting new highs and bonds remaining quiet, it seems that the euro will continue to be used as a funding currency for riskier positions elsewhere on an ongoing basis," says Jeremy Thomson-Cook, Chief Economist at Equals Money. "We remain bearish on the euro and see GBP/EUR moving towards 1.1940."

And one economist says concerns over PPI feeding persistently high levels of CPI inflation might be misplaced.

"Volatility in PPI inflation is usually not something that causes great concern – it is typically linked to swings in commodity prices, and there is often limited pass-through to consumer prices," says Bill Diviney, an economist at ABN AMRO.

"We see scope for further declines in core CPI inflation over the coming months," he adds.