The UK economy grew more than expected in June and although the British Pound failed to show any significant volatility the data helps secure recent gains.

The Office for National Statistics says the economy grew 22.2% Year-on-Year in the second quarter, which is little higher than the 22.1% expected by the market.

"The real news was the unexpectedly strong growth in June which suggested that the recovery maintained a bit more momentum at the end of Q2 than we had thought," says Ruth Gregory, Senior UK Economist at Capital Economics.

The expansion is consistent with the Bank of England's forecasts for a robust rebound in economic activity in 2021, which economists say could allow for an interest rate rise to take place in 2022.

The Bank last week effectively rubber-stamped the market's expectation for a 2022 interest rate rise, a development that has been met with broad-based gains in the British Pound.

Stephen Gallo, European Head of FX Strategy at BMO Capital Markets says the economy is well on track to grow by a bit above 6.0% in calendar year 2021.

"With July already expected to be a solid month due to further economic reopening, a 1.0% handle for June would feed the narrative pointing towards a removal of emergency levels of accommodation by the BoE during H1 2022," says Gallo.

The ONS said nearly half of June's 1.0% month-to-month increase in GDP was driven by a 4.5% jump in output in the health sector, due primarily to a surge in people visiting their GP. 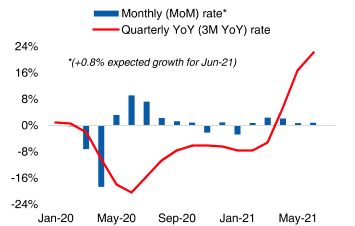 The current pricing of the sterling OIS curve - used to predict future interest rate rises - has the first full 15bps rate hike baked into it by June.

"Assuming Q3 shapes up to be a strong growth quarter, and there is no harsh reimposition of restrictions during autumn and winter months, we don't see why that 15bps can't be pulled forward, especially since the BoE has scope to argue that the return to a 25bps setting is not a 'tightening move'," says Gallo. 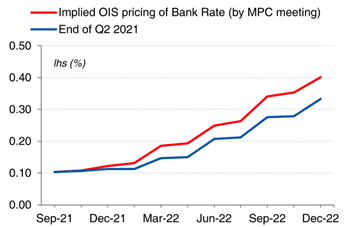 Above: expectations for a rate rise at the BoE came forward after the August meeting.

"On balance, we think the June GDP data will have an important bearing on the speed at which EURGBP re-tests the 0.8400 level. The other key factor for the week is risk appetite, with downside in the currency pair more likely in a supportive environment for risk," says Gallo.

By the second quarter the UK's quarterly GDP was still 4.4% below its fourth-quarter 2019 level according to the ONS, suggesting the economy can still make some easy gains over coming weeks.

"The UK's continued underperformance remains largely attributable to weakness in households’ spending, which was 7.0% below its Q4 2019 level in Q2, despite a quarter-on-quarter increase of 7.3%," says Samuel Tombs, Chief U.K. Economist at Pantheon Macroeconomics.

A rebound in household spending in the third quarter will likely shape the recovery going forward.

The lion's share of that 7.3% rebound in household expenditure will be towards the back end of the second quarter as the accommodation and food services sector saw output increase 10.1% following the major unlocking of May 17.

"The pace of the UK’s vaccination programme – which has successfully delivered two Covid jabs into the arms of 75% of the adult population – is an important factor and may explain why UK growth has soared to treble that of Germany and four times that of its European neighbour France," says Sam Fuller, Director of Financial Markets Online.

Elsewhere, business investment rose by 2.4% quarter-on-quarter but was still a hefty 15.3% below its Q4 2019 level according to Pantheon Macroeconomics.

Trade data released by the ONS showed the volume of exports leapt by 3.0%, but they still were 21.5% below their Q4 2019 level, "reflecting a combination of Covid and Brexit impacts," says Tombs.

Looking ahead, David Page, Head of Macro Research at AXA Investment Managers, says "from here the pace of growth looks likely to slow, both mechanically and driven by rising headwinds, such as the delta variant resurgence and the unwind of the furlough scheme."

AXA Investment Managers do however still forecast a robust performance by the economy in the second half of 2021, eyeing annual growth of 6.7%, although they expect the pace of growth to be a little slower and a little more spread out than the Bank of England currently anticipates.

"As such, we continue to expect a slower tightening in monetary policy than markets," says Page.

AXA Investment Managers nevertheless have brought forward expectations for an interest rate rise at the Bank of England to end-next year, they now forecast the Bank Rate rises to 0.50% in the third quarter of 2023.

Capital Economics says the pace of the recovery is likely to slow as the economy climbs back towards its pre-crisis level.

They say the 'pingdemic' may have stifled economic activity last month, meaning that June’s robust rise in GDP may have given way to very little growth during July.

"But that would take the economy back to its February 2020 level by October. And the big picture is that the recovery so far has been faster than most imagined possible six or 12 months ago. The economy may yet surprise most forecasters again by emerging from the pandemic without much scarring," says Gregory.