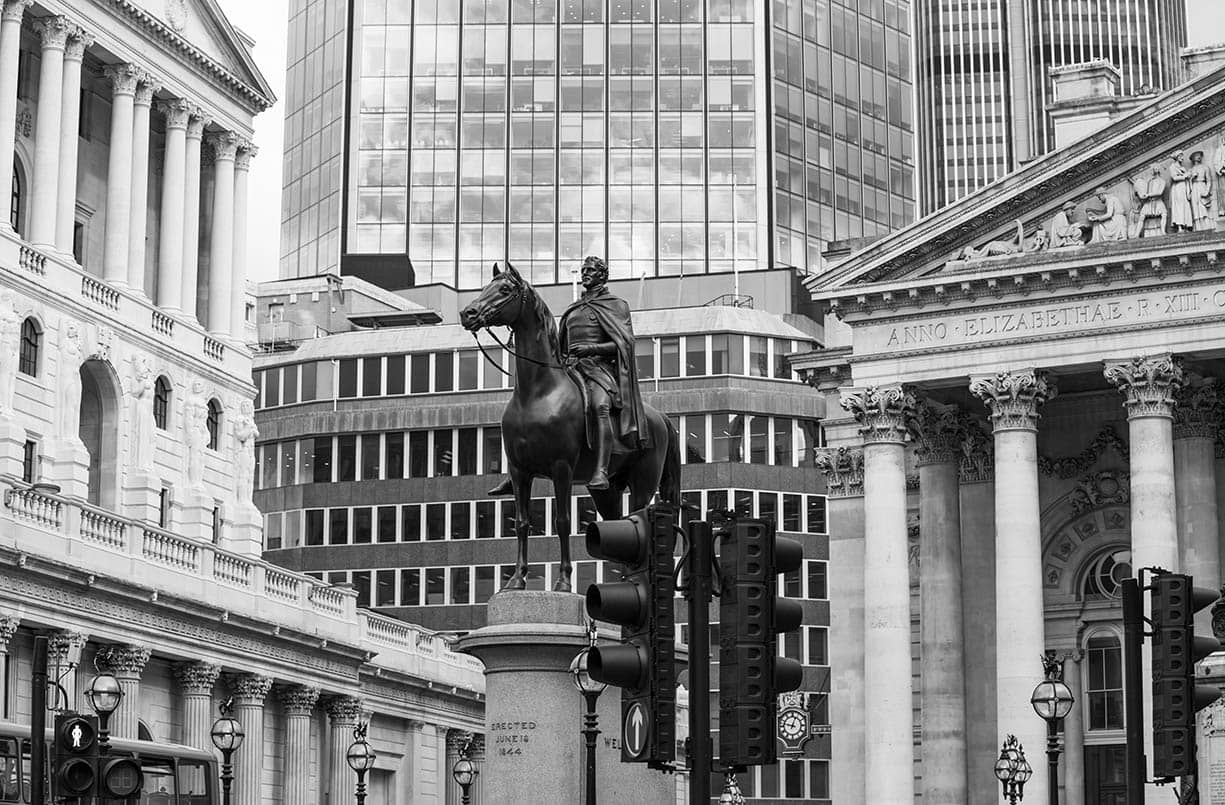 The Bank of England is set to raise interest rates in the second or third quarters of 2022, according to the reaction of interest rate and foreign exchange markets to the August policy update.

The British Pound saw some volatility around the timing of the noon announcement but remains steady around levels seen over recent days, reinforcing investor expectations for a 2022 rate rise.

Sizeable gains or declines in Sterling would have been consistent with a more substantive shift in market expectations based on the Bank's forecasts and guidance.

The Bank's Monetary Policy Committee (MPC) believes the current increased global and domestic inflation spike will be transitory and therefore sees no need to rush into an imminent rate hike, according to a statement released by the Bank.

But, the economy is forecast to endure a more sustained phase of above-target inflation in the short-term than was predicted in the May report which suggests sitting on record-low levels is not sustainable over a medium-term horizon.

Inflationary pressures are nevertheless predicted to ease, with CPI inflation forecast to revert to near to the 2% goal in the medium-term according to the Bank's quarterly Monetary Policy Report.

It is the Bank's assessment of medium-term inflation that forms the crux of current policy decision making given the lag between decisions made today and their impact on the economy.

That it will be at 2.0% in three years time suggests the post-financial crisis era of below-target inflation rates has passed which is an assessment that could hint at an era of higher interest rates, even if the Bank itself does not yet hold such a view currently.

"Given that these forecasts are based on market pricing, that suggests policymakers are broadly comfortable with the modest amount of tightening investors are factoring in over the next couple of years," says James Smith, Developed Markets Economist at ING Bank.

Susannah Streeter, senior investment and markets analyst, Hargreaves Lansdown says "the description of higher inflation as temporary has been stretched to its limits given the timescale now set by the monetary policy committee, as 24 months above the 2% target may well be viewed as a pretty sustained period."

The Bank's Monetary Policy Report revealed economists now forecast the economy to return to pre-crisis levels by the fourth quarter of 2021.

The Pound-to-Euro rate traded at 1.1746 in the wake of the updates while the Pound-to-Dollar exchange rate was seen at 1.3923 with neither bulls nor bears being able to take a decisive grasp. 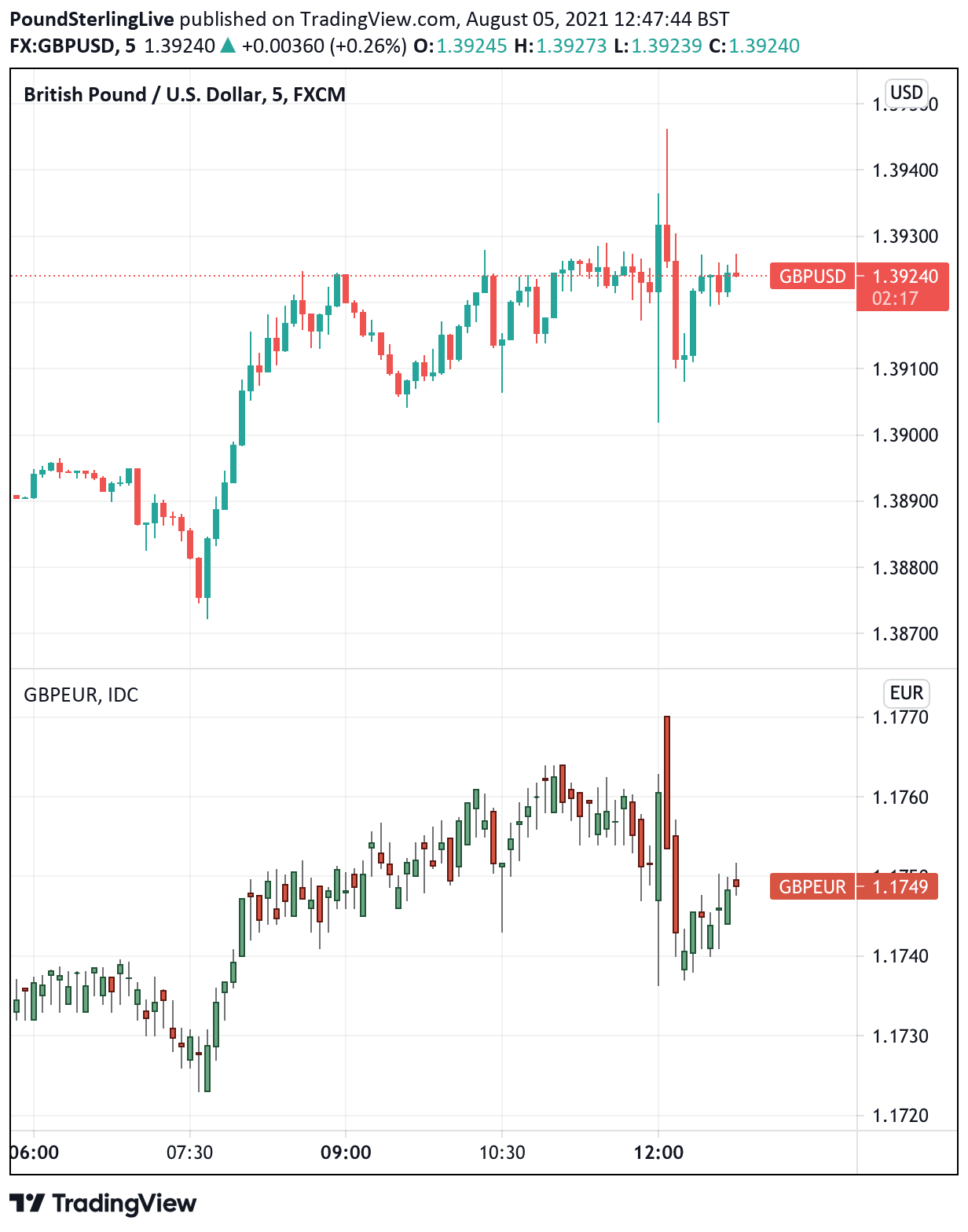 The Bank also laid out its revised strategy to start unwinding support, a process known as quantitative tightening.

Whether this would be made available today had a question mark hanging over it.

The MPC said it intends to begin reducing the stock of purchased assets under its Quantitative Easing programme (QE) by ceasing to reinvest maturing assets, but only when the bank rate has risen back to 0.5%. Previously the target had been set at 1.5%.

"The speed of unwind has the potential to be a little quicker than we might have expected, assuming the Bank were to immediately stop all reinvestments - and indeed ultimately sell bonds back into the market," says Smith.

Therefore, rate rises come before whittling down the tranche of assets purchased under the QE programme.

This sequencing is something of a bullish outcome for the British Pound, as explained by JP Morgan's foreign exchange trading desk:

"If they announce that they will start the process of Quantitative Tightning before rate hikes, this will likely be seen as dovish as this would imply that the first rate hike (market prices roughly 13bps by mid- 2022) will be pushed back."

The Bank added it could actually start selling bonds it has purchased once interest rates reach 1.0%, given the terminal rate is seen at 0.60% this would imply a scenario where medium-term inflation is burning hotter than the 2.0% target.

He notes the addition of a line in the August statement that was not present in the May statement:

"The Committee’s updated projections for activity and inflation are set out in the accompanying August Monetary Policy Report. They assume that, despite the spread of the Delta variant, the impact of Covid on the UK economy fades further over time. They are also conditioned on the market path for interest rates."

In short, inflation will sit above the Bank's 2.0% over the forecast horizon despite an expected rise to interest rates in 2022.

Governor Andrew Bailey said at the May Monetary Policy Report press conference that the Bank would never validate market expectations.

But the additional line suggests the Bank is keeping step with the market's expectations for a May rate rise.

Above: Market pricing suggests a rate rise by Q3 2022.

“Moving forward, we should expect the first rise in interest rates from the MPC during the second half of 2022, with the market currently pricing for the first hike in June 2022. However, if the economy continues growing as expected with inflation above the 2% target, we could see justification for the BoE to act sooner,” says Jesús Cabra Guisasola, Associate at Validus Risk Management.

However, a number of economists we follow are not convinced that the Bank will in fact raise interest rates in 2022 as current market expectations suggest.

Ruth Gregory, Senior UK Economist at Capital Economics says while the MPC’s policy statement sent a signal that higher interest rates are on the horizon, "we still think it’s more likely that the MPC continues to sit tight until the middle of 2023 before tightening policy".

Capital Economics forecast inflation to be a bit lower next year than the Bank expects, "which suggests policy won’t be tightened until mid-2023, rather than the mid-2022 date priced into the markets," says Gregory.

ING also see lift off for rates taking place in 2023, saying upcoming economic readings will disappoint against the Bank's expectations.

ING forecast growth of 1.5% in the third quarter, half of the 3.0% the Bank forecasts.

If these economists are right and the Bank does only raise rates in 2023 then it stands Pound exchange rates would come under pressure at some point in the future as market expectations are disappointed.