New research from Deutsche Bank suggests there is unlikely to be a substantial break higher in Pound exchange rates unless the market becomes convinced the medium-term growth outlook for the UK economy is improving dramatically.

This would require the economy to do more than merely register a strong post-Covid crisis rebound, instead some real productivity gains must be realised over coming months and years.

Deutsche Bank finds that the market's expectation for a 2022 interest rate rise at the Bank of England has more or less been priced by the market and for more substantive gains in the value of the currency the market must see higher interest rates beyond 2022.

The current market expectation is that while the Bank will raise interest rates relatively early when compared to other central banks, the terminal rate (or end point for rate hikes) will be low relative to pre-crisis levels.

"Rates were at their most bullish for the currency just after the August MPC meeting, when the Bank of England confirmed that their new strategy will be for rates to reach 0.5% (likely in hikes of 15 and 25bps respectively) before quantitative tightening can begin," says Shreyas Gopal, a strategist at Deutsche Bank.

(Quantitative tightening (QT) is the reversal of quantitative easing and involves the Bank of England selling the bonds it purchased. The Bank has effectively said once they start QT they won't be under pressure to raise interest rates substantially).

"The current state of the curve implies that the market does not expect the BoE to be able to continue to hike meaningfully once QT begins however," says Gopal.

In short, there are not many UK rate hikes on the long-term horizon which reflects a view that the economy will ultimately endure lacklustre growth rates over coming years.

"Positive global developments and a wider stabilisation in equities may help the pound recover some of its most recent losses, but given the weakening domestic data pulse the bar for UK-specific rate factors to boost sterling remains high," says Gopal.

Deutsche Bank note that the Pound Sterling Trade Weighted Index (TWI) is in something of a rut, given it is trading towards the top of its post-Brexit range: 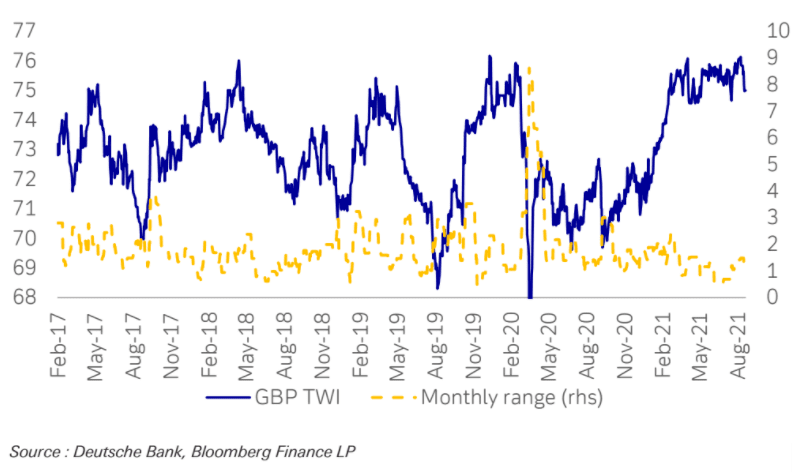 "In currency space, sterling TWI has settled into a relatively narrow range, after its sharp appreciation at the start of the year," says Gopal.

The Pound-to-Euro rate accounts for 67% of the Pound's TWI (as the Eurozone is the UK's largest trade partner), which explains why the range in the above above chart mirrors the long-term Pound-Euro exchange rate chart: 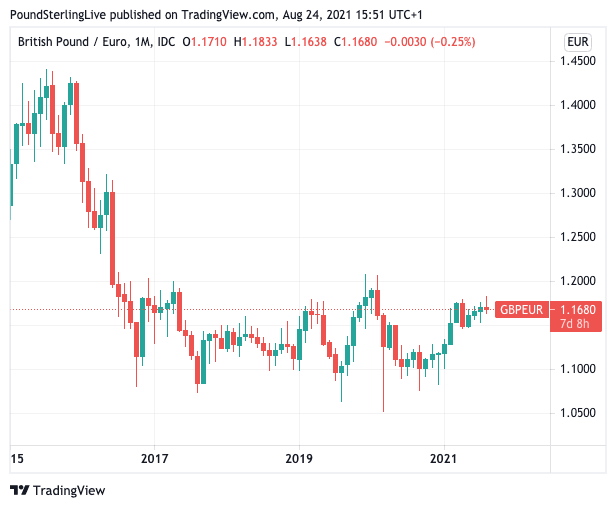 Jeremy Stretch, Head of G10 FX Strategy at CIBC Capital Markets sees some positive signs for the Pound in that a combination of inward UK portfolio flows is moving back to positive.

This incoming investor capital comes after three months of contraction, and when "allied to the current positive risk environment has underpinned the recent rebound in trade weighted Sterling," says Stretch.

In the short-term the British Pound is looking to rebound against the Euro following a sharp decline in the week prior.

"The pound had performed well in 2021 on hawkish BoE taper and rate expectations but suffered outsized losses last week as the uptick in global COVID cases was seen tempering the pandemic recovery," says Paul Spirgel, a Reuters market analyst.

Domestically, there was some good news on the economy issued on Tuesday when the CBI released their Distributive Trades Survey for August, which revealed a sharp uptick in retail spending.

Economists have expressed concern that the UK's post-lockdown rebound has been running out of steam during the summer months owing to a string of underwhelming economic data releases.

But signals that activity is picking up again through August could provide some domestic support to the UK currency.

"Consumer led momentum should validate the presumption of EUR/GBP heading back towards the 0.8484 low from 16 August," says Stretch.