The Pound was taking a breather from its 2021 rally on Wednesday having eked out gains over only some European counterparts ahead of a Bank of England (BoE) policy decision that will be instructive of the outlook for Sterling in the months ahead and, potentially even other currencies too.

Sterling is at an inflection point at least as far as its value in relation to the U.S. Dollar is concerned, although given GBP/USD's emerging role in keeping the Euro afloat and the U.S. Dollar under wraps, Thursday's Bank of England policy decision could be a crucial moment for the currency market at large.

Meanwhile, the UK economy is also at its own inflection point having been returned to 'lockdown' in December and January, which could yet endure well into Spring and means that at least a technical recession is all but certain, with the economy now expected to have shrank in both the final and first quarters of 2020 and 2021 respectively.

But a comparatively faster coronavirus vaccination campaign than is being seen elsewhere is offering the UK a shot at outperforming neighbours in any recovery ahead and provides at least some semblance of assurance to the BoE about the comparative outlook for the economy. It's this the BoE will weigh against near-term threats on Thursday.

At the last update Monetary Policy Committee members voted to leave Bank Rate unchanged at 0.10% after judging that "the existing stance of monetary policy remains appropriate," in line with market expectations. Only after that the bank began buying an additional £150bn of UK government bonds as part of its quantitative easing (QE) programme following a November decision to increase its scale, while also continuing to deliver on its June pledge to buy up another £100bn of government bonds.

The BoE will update the market on its intentions in relation to these at 12:00 on Thursday, in addition to revealing the outcome of a feasibility-minded study of negative interest rates, which has been ongoing for the best part of a year as the bank blew hot and cold on the perceived merits of them as a policy tool. Governor Bailey indicated earlier in January that the BoE isn't keen on the idea of negative rates, prompting a rally in Sterling at the time, although other members of the MPC have previously expressed an openness to the idea. As a result, there remains scope for the suggestion that their use might be likely in the short or medium-term on Thursday.

This could pull the rug out from under the Pound, and likewise with any other decision to cut Bank Rate, although pricing in the derivative market mens the opposite is also true. Overnight-index-swap prices implied this week that investors still expect Bank Rate to fall from its current 0.10% this year, albeit only by a few basis points. As a result, there's scope for BoE-inspired moves in Sterling exchange rates ahead of the weekend.

Below a selection of analysts, economists and strategists give their views on what to expect this Thursday. 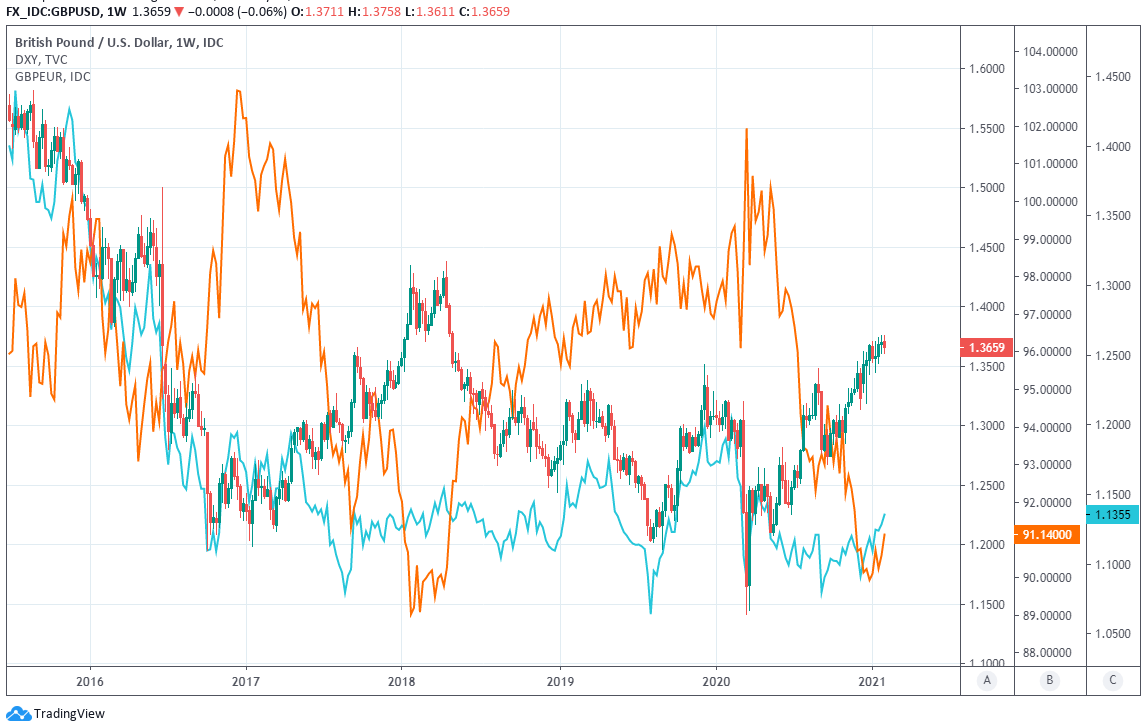 "We agree with our economists that the BoE will keep its policy rate unchanged and note this is largely priced in, with meeting OIS implying just 0.5bp in cuts."

"As for negative rates, our economists believe that the BoE will not rule out their use in the future, but is unlikely to deploy at the meeting. Though some MPC members, like Tenreyro, sound amenable to their use, questions remain around their efficacy and impact on bank profitability."

"With markets having priced out much of the cuts over the last few weeks and the risk that the market takes BoE openness to negative rates as permission to reprice them more significantly, we close our short 2y position."

"Even as the news on the future UK-EU relationship and the speedy rollout of the vaccines has been positive since the previous meeting, it seems inevitable that the MPC will downgrade its near term outlook due to the current national lockdown. However, the aforementioned factors should allow the MPC to look beyond the near-term risks and to focus on the trajectory of the recovery. "

"We expect the MPC to strike a fairly confident note, as they have done over the last couple of months. We should also hear more on the review on negative interest rates. We think that, as in August last year, the findings will predominantly highlight the potential drawbacks and challenges of such a policy. This may damp any market expectations of a near-term rate cut."

"Our base case is that the MPC is unlikely to materially reduce its upbeat growth forecast at this stage: the ONS's methodology for computing total output may have understated the actual boost from real government spending last year, and therefore overstated the extent of the economic contraction."

"In as much as we don't expect significant volatility in the GBP tomorrow, we would expect the Bank's relatively upbeat views on the FY outlook to mostly offset the impact of any near-term caution (particularly with the ceiling on top of EURGBP starting to look more formidable). We're less enthused about adding to GBPUSD longs above 1.36 for the time being, but we think there is scope for weakness in this pair to be fairly limited in view of vaccine optimism."

"If the BoE draws conclusions about negative rates this week we expect "not feasible right now, banks are sceptical, but feasible eventually and likely stimulatory". Conclusions on the feasibility seem most likely this week. We expect "banks are not ready yet but could be eventually". On the economics the BoE could just repeat that negative rates are in the tool-box and under constant review...But external MPC members have been arguing the lower bound for interest rates is at least -50bp."

"For FX markets, the debate around negative rates is likely to prove the most significant for GBP given the pound's historic sensitivity to rate differentials. UK yield differentials have been steadily widening in favour of a higher GBP. We identify the 4th February meeting as pivotal to sterling moves in a month in which it faces traditional headwinds."

"The rapid vaccine rollout and the corresponding likelihood of a spring recovery has taken the pressure off the Bank of England to offer further stimulus. Policymakers will be careful not to shut the door on negative rates, but we don't expect further rate cuts this cycle."

"The key message is likely to be one of cautious optimism. We don’t expect negative rates in this cycle, though we could at some point see a step in this direction if the Bank decides to offer a negative rate on its Term-Funding Scheme, a policy designed to incentivise lending to SMEs."

We think those members' policy position would be pretty complicated if there is no more stimulus this month and the MPCs position on negative rates is left as vague as now. So we look for stronger words about the precise lower bound in the minutes or Monetary Policy Report."

"Given that the forward curve of expectations has the BoE at slightly negative rates after the June meeting, it appears the intention is to retain NIRP as a policy option but not to necessarily exercise it."

"The GBPUSD long ago started looking sickly and lacks momentum – 1.3500 a huge level there. EURGBP, meanwhile will be interesting to watch for whether sterling can continue to gain the upper hand and pull higher even if the BoE fails to banish the NIRP policy option."

"We do not believe that the effective lower bound will be formally lowered from 0.1% at this meeting. Even if this were to happen later in the year – if the MPC wanted to increase its potential for more stimulus – we still consider it unlikely that the signal rate would actually be lowered below zero in the coming months provided that there are no new negative shocks to the economy."

"We consider it unlikely that additional stimulus in the form of an even higher asset purchase target will be provided now. First, the decline in the economy towards the end of last year was smaller than the BoE anticipated at the November meeting, suggesting that the slowdown due to new restrictions in early 2021 will likely also be smaller than envisaged. Secondly, the Brexit uncertainty is now behind us and no longer a cause for concern to the BoE. Thirdly, the vaccine rollout is well underway and will likely provide a significant boost to activity this year. Fourthly, there is still significant room for further asset purchases within the current programme if needed."