The British Pound eased back against key rivals amidst a tumultuous session for stock market that saw all of 2021's gains erased in a matter of hours, in turn creating a ripple effect right across the financial market place.

Sterling's 2021 rally against the Dollar suffered a setback following the slump in global stock markets, but a positive vaccination story in the UK is likely to underpin the currency over coming days and ensure damage is limited, particularly against the Euro.

There are contradictory forces working on Sterling: on the one hand the UK's fast vaccine rollout is proving a positive narrative for the currency, but on the other falling global markets are providing a negative narrative.

The developments remind us that currency movements tend to be the result of a confluence of forces, the power of each force tends to ebb and flow, making it difficult to focus on just one simple narrative at any one time.

We have over recent days drawn readers' attention to the influence of broader market trends on Sterling, an influence that has grown since Brexit negotiations ended in December 2020.

A general rule of thumb at this stage in 2021 is that Sterling tends to outperform the Dollar, Euro, Franc and Yen when markets are rising, but the opposite is true when markets are falling. 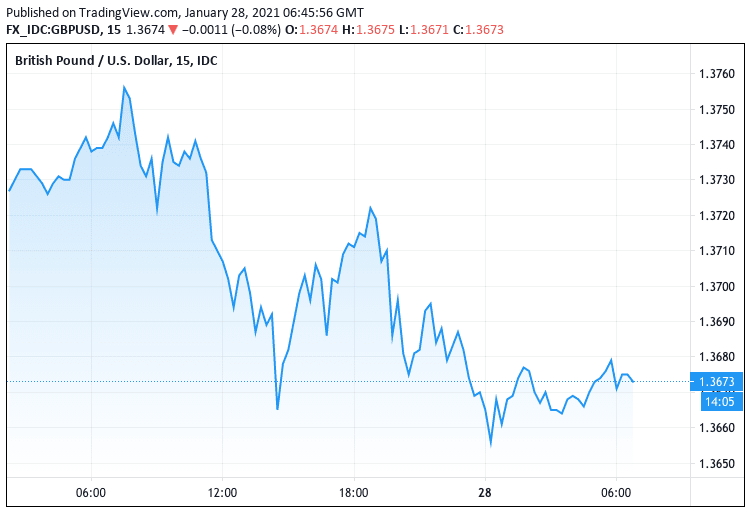 Above: GBP/USD declines over the past 24 hours amidst a rally in the Dollar that comes amidst a sharp decline in stock markets.

A global markets sell-off that accelerated through the Wednesday trading session therefore capped a rally in the Pound that had earlier seen Euro buyers achieve the best exchange rate available to them since May 13, 2020.

Gains were reversed through the U.S. trading session as investor 'risk off' sentiment lead to sharp losses in equity and commodity markets, allowing the Dollar to make a notable comeback.

There was no single obvious event behind the market decline.

How the Pound trades over coming days and hours could therefore depend on how the broader market behaves.

With no single and obvious event to pin onto the stock market slump, analysts say it is clear that an impressive rally in stocks is being unwound, and a technical 'squeeze' is underway.

With investors so heavily invested in upside bets, any moves lower can rapidly snowball as more and more investors exit these bets, as is currently the case.

"Dealers said highly leveraged investors were taking profits where they could to cover losses elsewhere, leading to sharp falls in a lot of overcrowded trades," reads a report from the Reuters newswire. 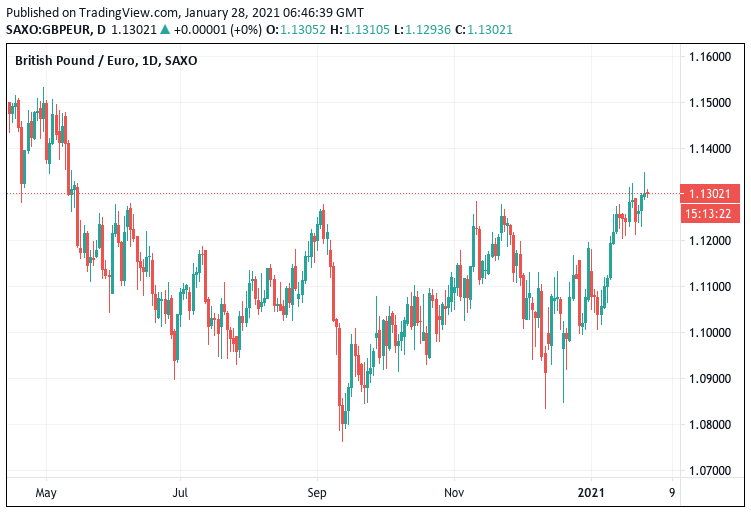 Above: despite the market mayhem, the Pound looks well bid against the Euro.

In addition, intense speculative market participation by retail traders has fuelled sizeable bubbles in some sectors of the market. The GameStop share price surge is the prime example, whereby the stock rocketed and in doing so delivered a savage blow to institutional investors and hedge funds that were betting against the stock.

Ortenca Aliaj at the FT explains how the developments impacting hedge funds 'shorting' the market can have a wider impact:

"Funds have not only been covering their short positions - the bets they placed against individual shares - but also selling shares in companies to cut their leverage and reduce their gross exposure to the market."

"Concern about heightened speculative trading activity deepened," says Susan Correia at Nedbank CIB. "The Dow lost 633.87 points to 30,303.17, its worst day since 28 October. The S&P dropped 2.57% to 3,750.77, slipping from a record high and suffering its biggest drop in three months."

From a macroeconomic perspective it is hard to ignore the realisation that markets might have been too optimistic in their expectations for a vaccine-lead recovery to take grip from early on in 2021.

The logistical challenges to vaccinating billions of people is only just starting to dawn while vaccine producers are struggling to get up to speed. A high-profile scrap between AstraZeneca and the European Union over the speed of vaccine supplies has highlighted just how fast tensions on the matter are rising.

"We were all so enamoured of the blazingly fast development of vaccines that we neglected to consider production bottlenecks—and were misled by company and government announcements alike that the stuff could be produced on demand. It seems we really do have a global shortage of vaccines that will persist for many months," says Barbara Rockefeller of Rockefeller Treasury Services Inc.

In addition to potential vaccine disappointment, markets will also be contending with a realisation that the administration of Joe Biden won't be able to deliver their covid rescue financial package as soon as some in the market had expected.

The proposed $1.9TRN includes another cash payout to Americans, which is important from a markets perspective as these handouts were a crucial driver of rallies in crypto currencies and stocks in 2020.

It appears partisan bickering over the impeachment of Donald Trump has taken up the Senate's energy, at a time when many Americans had been expecting a concerted cross-party effort to pass a support package.