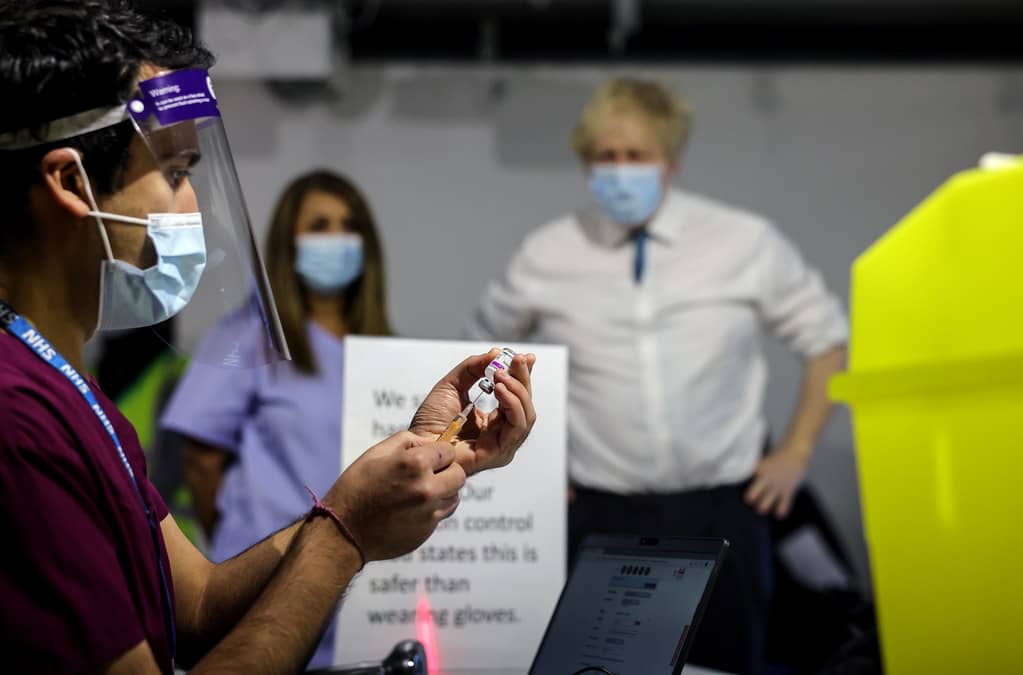 The British Pound has been subject to renewed buying interest heading into the mid-week session, with numerous analysts we follow citing the UK's vaccine rollout as being the primary driver of demand.

"We generally remain supportive of the stronger Sterling view given the impressive vaccine roll out the UK has implemented. Of course short-term virus worries remain a headwind, particularly as UK lockdowns look set to stay for a significant amount of time," says a note from the spot trading desk at JP Morgan in London.

The Pound-to-Euro exchange rate rallied back towards the 1.13 level over the course of the past 24 hours, but for now it is proving difficult for the Pound to close above here.

The Pound-to-Dollar exchange rate has risen back to 1.3730 and is close to fresh two-year highs, but again there does appear to be some technical resistance in the market preventing new highs being made. 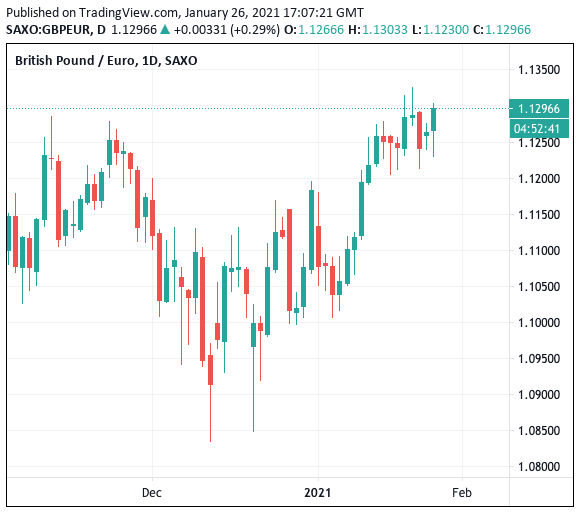 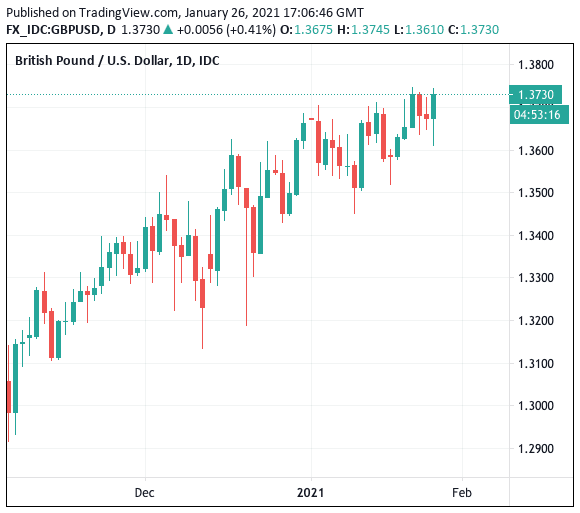 Regardless of some market resistance, the broader technical trend remains geared towards further Sterling advances while near-term sentiment on the currency appears to be broadly constructive according to trader positioning.

The latest data from the Commodities Futures Trading Commission (CFTC) shows the number of open contracts that have been opened in anticipation of further GBP gains (long contracts) now exceed the number of contracts betting for a decline (short bets).

The CFTC's most recent Commitment of Traders Report - the most comprehensive report available on how traders are betting = shows the market now has a net 'long' position on Sterling, with the aggregate position now valued at $1.1BN following a weekly increase of $62MN. 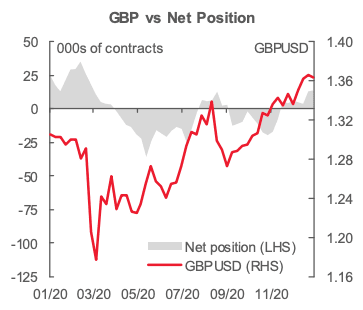 "Optimists are hoping that the UK’s relatively rapid vaccine roll-out will weigh against the prospects of a negative Bank rate and support the country’s economic rebound," she adds.

The UK has delivered 6.8 million first doses of a vaccine as of January 26, meaning close to 10% of the population has now received a dose of the vaccine.

Ministers say most 85 year-olds have received a dose and that on the current trajectory an objective of giving a dose to the country's most vulnerable groups by the middle of February will be met.

The speed of the rollout relative to that in other countries is being seen by foreign exchange analysts as being an important theme for economic growth, and currency performance, in 2021.

On this metric, the UK and its currency are in a solid position.

"In the relative world of FX, the relative pace of the COVID-19 vaccine roll-out is already becoming more of a focus and may be proving helpful to GBP," says Daragh Maher, Head of Research, Americas, at HSBC. 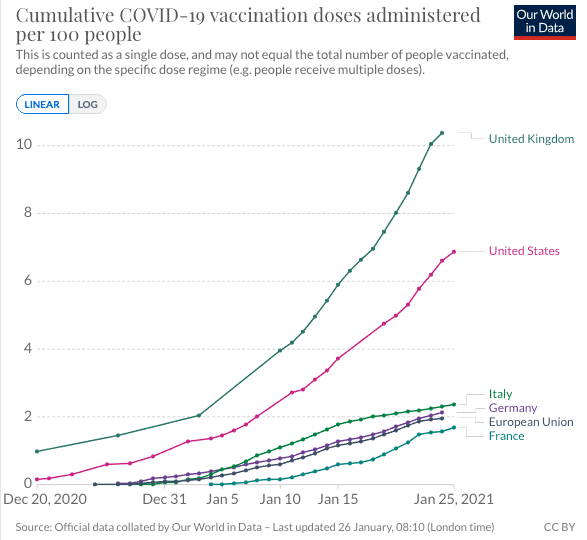 The UK's lead in the vaccination race is particularly noticeable against EU states where a list of problems mean the bloc will unlikely achieve vaccine-induced herd immunity in 2021 at current rates.

In fact, some estimates show Germany might only reach herd immunity in 2024 and France in 2023 at current rates, although the pace is expected to accelerate once more vaccines come online.

Friday should see the bloc receive a timely boost as the AstraZeneca jab is being touted for approval, even though delays in the company's supply schedule have caused a great deal of concern to member states.

In an interview with La Repubblica, the CEO of vaccine manufacturer AstraZeneca said the UK was likely to have vaccinated half the population of the UK by March.

Pascal Soriot said "by March, the UK will have vaccinated maybe 28 or 30 million people... the prime minister has a goal to vaccinate 15 million people by mid-February, and they’re already at 6.5 million. So they will get there."

"An impressive pace of vaccination is just about the only short-term positive for the UK economy and it isn't that which prevents sterling falling. The downside is defended by valuation, the upside as elusive as good news on the economy. At least the news could conceivably improve," says Kit Juckes, a foreign exchange strategist at Société Générale.

Concerns that will cap Sterling's upside potential include incoming data that suggests the third national lockdown in the UK will likely result in another sharp contraction in UK economic growth, which could in turn prompt the Bank of England to cut interest rates again at some point in 2021. A further headwind is the huge bill being racked up the government as it finances various support packages for businesses and citizens.

A threat to a future economic recovery lies with Chancellor of the Exchequer Rishi Sunak racing to raise taxes and restrict spending as the covid-19 pandemic fades.