The preferred expression for further Dollar weakness is via the Euro-to-Dollar exchange rate (EUR/USD), which they maintain 'long' exposure to.

Being 'long' an asset is trader parlance for engaging a trade that delivers profit if an asset rises in the future.

Some doubts were cast on whether the Dollar would continue declining following some strong gains made in the previous week on the back of a set of U.S. economic data that pointed to a robust economic recovery, particularly with regards to the employment situation.

Specifically, the data was robust enough for markets to start raising bets that the U.S. Federal Reserve (Fed) might soon 'bite the bullet' and start reducing their quantitative easing programme.

'Tapering' quantitative easing is seen as the first step the Fed will be required to take ahead of raising interest rates, which is in turn broadly considered to be supportive of the Dollar.

But Dollar bulls were subsequently dealt a setback on Friday when all-important U.S. labour market data disappointed, suggesting the Fed might in fact be in no rush to raise rates.

"The US economy added 559k jobs in May and the U3 unemployment rate edged down to a recovery low of 5.8%. But the latest employment report missed market expectations (which were elevated after the earlier ADP result), and did little to dispel concerns that supply frictions are holding back the labor market recovery," says Zach Pandl, Economist at Goldman Sachs.

The EUR/USD exchange rate declined by a notable 0.70% on Thursday June 08 in the wake of the ADP report but recovered half of that loss on the subsequent non-farm payroll report the following day.

However, the Euro is failing to convince it is ready to make a concerted push higher and is seen drifting at 1.2170 at the time of writing. 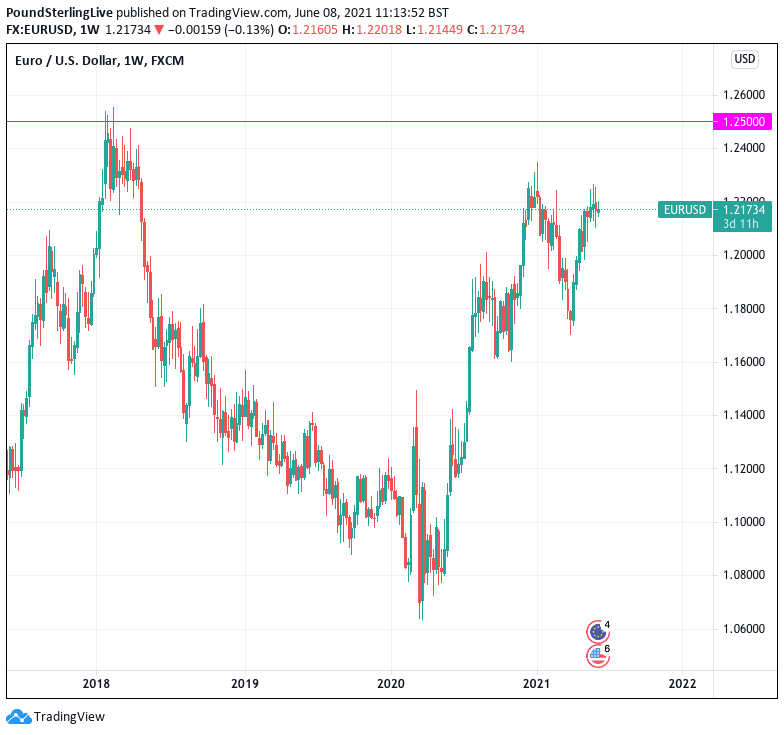 But for Goldman Sachs, a broader move higher in the Euro-Dollar in place since April is not yet done.

"We expect that the report will ease market concerns about an earlier-than-expected wind down of the Fed’s asset purchases, even if it does not entirely eliminate the possibility of a September taper announcement. The combination of steady Fed expectations and a broadening global economic recovery should allow recent Dollar weakness continue," says Pandl.

Meanwhile, rebounding economic activity and equity inflows have provided a tailwind to the single currency says Goldman Sachs; "issuance of Recovery Fund bonds, which is set to begin soon, could also result in official demand for EUR".

"Besides the Euro, a more benign US real rate backdrop should be supportive of a variety of EM crosses as well. As we noted last week (and covered in more detail here), EM currencies should benefit over the coming months from cheap valuations, a rebuild of carry from central bank rate hikes, and the vaccine-led cyclical reopening," says Pandl.

Goldman Sachs say their preferred expression for Dollar weakness remains to be long EUR/USD, with a forecast target of 1.25.

But Pound Sterling Live report that one noted currency trader is of the view that the Dollar not weaken, and could even strengthen, in the run up to the June 16 meeting of the FOMC decision.

Brent Donnelly, Senior FX Trader at HSBC in New York says "I think it will be difficult for the USD to sell off further from here."

"The dollar should be stable or go a bit higher between now and June 16," he adds.

Donnelly says the market should be on "high alert for potential taper talk at the June 16 Fed meeting".