It is a soft start to what promises to be a busy week for the Euro-to-Dollar exchange rate (EUR/USD), given the release of U.S. inflation numbers and a key European Central Bank meeting are both due.

The Euro has softened against the Dollar as buyers could not find the impetus to build on that rebound witnessed on Friday in the wake of some disappointing U.S. employment data.

The failure to really take advantage of disappointing U.S. data meant the Euro ended the previous week nursing a 0.20% loss, ensuring the retracement from the May 25 high at 1.2266 remains intact and in charge of near-term price action.

"EUR/USD did not maintain its initial break below the 23.6% retracement at 1.2133. This was not enough however to restore the up move either and we are unable to rule out a deeper retracement to 1.2051 and a possible slide to the 1.1994/86 band of support (mid March highs and the 22nd April low), which will ideally hold the downside," says Karen Jones, Head of FICC Technical Analysis at Commerzbank. 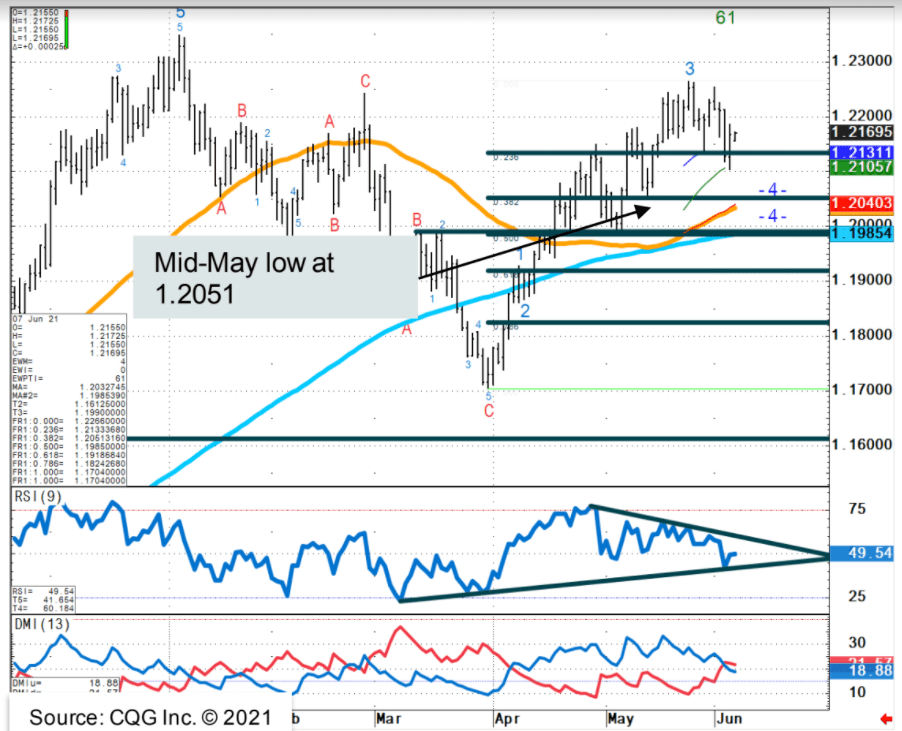 Above: EUR/USD technical view from Commerzbank.

If there are to be any sizeable moves in Euro exchange rates over coming days they would likely occur on Wednesday when U.S. inflation data is released and/or Thursday when the ECB deliver their policy update.

Foreign exchange markets will want to know if ECB President Christine Lagarde and her team are now considering whether or not to reduce their extraordinary support to the economy, which includes ultra-low interest rates and generous quantitative easing.

If the ECB do indicate that the economic rebound will be strong enough for them to consider reducing support via their quantitative easing programme - known as PEPP - the Euro could benefit.

The great theme for foreign exchange markets at present concerns the speed at which the world's major central banks are exiting their Covid crisis support programmes, with those looking to make an early exit seeing their currencies better supported.

A subdued tone by the ECB on the region's economic outlook and the reiteration of a steadfast commitment to maintaining support could therefore see the Euro going lower.

"We look for the ECB to maintain that PEPP purchases will continue "at a significantly higher pace than during the first months of the year." However, we think that purchases will ultimately be reduced in Q3 due to seasonality/liquidity, rather than the macro outlook or financing conditions," says Richard Kelly Head of Global Strategy at TD Securities.

"This week’s ECB meeting will be the next major risk event; our economists expect the governing council to retain language indicating a “significantly higher” pace of asset purchases compared to early in the year," says economist Zach Pandl with Goldman Sachs.

The weight of the looming decision means the Euro is failing to really find any traction at the start of the new week, with declines noted against the Dollar in particular.

The U.S. Dollar retreated against the Euro, Pound and other major currencies following the release of a softer-than-expected set of labour market statistics out of the United States on Friday.

But there is a clear sense that the market is unable to follow up on any selling of the Dollar in the current environment, which will frustrate those looking for a stronger Euro.

U.S. economic data is a primary driver of the Dollar at the present time as it informs market expectations as to whether or not the Federal Reserve will finally start reducing its quantitative easing programme.

The 'tapering' of quantitative easing at some point in 2021 would signal to the markets that a rate rise is due in 2022 at some point, a development broadly supportive of the Dollar.

For the Fed to take this 'Dollar supportive' step they would need to see strong employment gains combined with strong inflation.

Inflation is certainly rising fast, but employment is proving more frustrating, as evidenced by the disappointing payroll numbers out on Friday.

The U.S. non-farm payroll May edition revealed the economy created 559K jobs, more than the 278K created in April but less than the 650K markets expected.

But what of inflation?

"We expect the dollar to remain gently offered next week, when May inflation numbers in the US may come in at 4.8% and further dampen the USD real rate," says Chris Turner, Global Head of Markets and Regional Head of Research for UK & CEE at ING Bank.

ING's economists look for headline and core inflation to jump to 4.8% and 3.3% year-on-year respectively.

But they say this could represent the peak in the inflation jump as peak base and bottleneck effects might be seen in these figures.

"Last month FX and Rates markets looked through the jump in inflation and we suspect the same may be true this month. In effect the combination of higher US inflation and a Fed prepared to do little about it is a negative environment for the dollar," says Turner.

Should inflation disappoint and result in Dollar losses, EUR/USD could