The Euro-to-Dollar rate closed more than two percent higher for the week on Friday after its strongest performance since the March liquidity crisis but could be tested in the coming week by a greenback that's heavily oversold and risk appetite that's softening amid multiple threats to the global recovery.

Europe's single currency was boosted after European leaders surprised markets by with the endorsement of a revised version of the EU's recovery fund on Tuesday, leading to a more-than two percent gain that lifted the Euro above the 50% Fibonacci retracement of its 2018 downtrend.

But U.S.-China tensions are rising and second wave outbreaks of coronavirus in Spain, Japan, Hong Kong and others are drawing attention while stock markets have begun to soften. All are a recipe for a potential correction by the Dollar, which has been penalised of late owing to its own second wave.

"Moving ahead, the notion of fresh solidarity within the Union creates a positive environment for the EUR to cash in on more dollar weakness, with the latter likely to be the main driver of future upsides for the pair," says Petr Krpata, chief EMEA strategist for currencies and bonds at ING. "All in all, we expect idiosyncratic pushes to the EUR to fade next week, but the common currency should still prove amongst the most resilient in G10 to any recovery in the USD."

Some see the Euro as vulnerable due to Spain's troubles, which are increasingly prompting actions that could constrain its recovery. The British government was the latest this weekend to tighten up travel protocols when it instructed travellers returning from the popular holiday destination to self-isolate. Spain was removed from the UK travel corrridors exemption list. 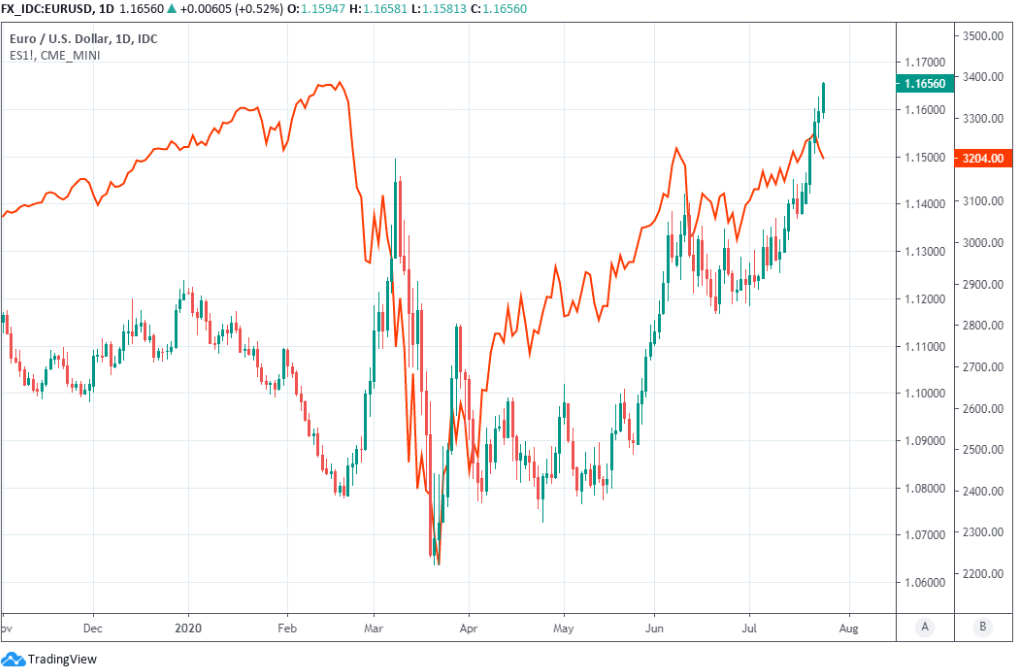 "A falling EUR/JPY may stall the EUR/USD rally, which would be no bad thing, given how fast the euro is rising overall. The second chart shows EUR/USD and EUR/CNY. The yuan has a bigger weight in the ECB's trade-weighted basket than the dollar and is back to 2014 levels," says Kit Juckes, chief FX strategist at Societe General. "Can an export-sensitive economic zone emerging timidly from the worst (we hope) of a pandemic really cope with a the currency rising this fast for long?"

When Spain's problem is combined with rising numbers in areas where the virus had previously been thought to have been contained including Japan and Hong Kong, the Dollar may no longer stand out like quite so much of a sickly thumb despite the ongoing second wave in the U.S.

All risk currencies gained last week but Friday saw the Canadian Loonie crack and the coming days may see weakness spread if the Federal Reserve (fed) is unable to revive the stock market rally in its 19:00 policy update on Wednesday. 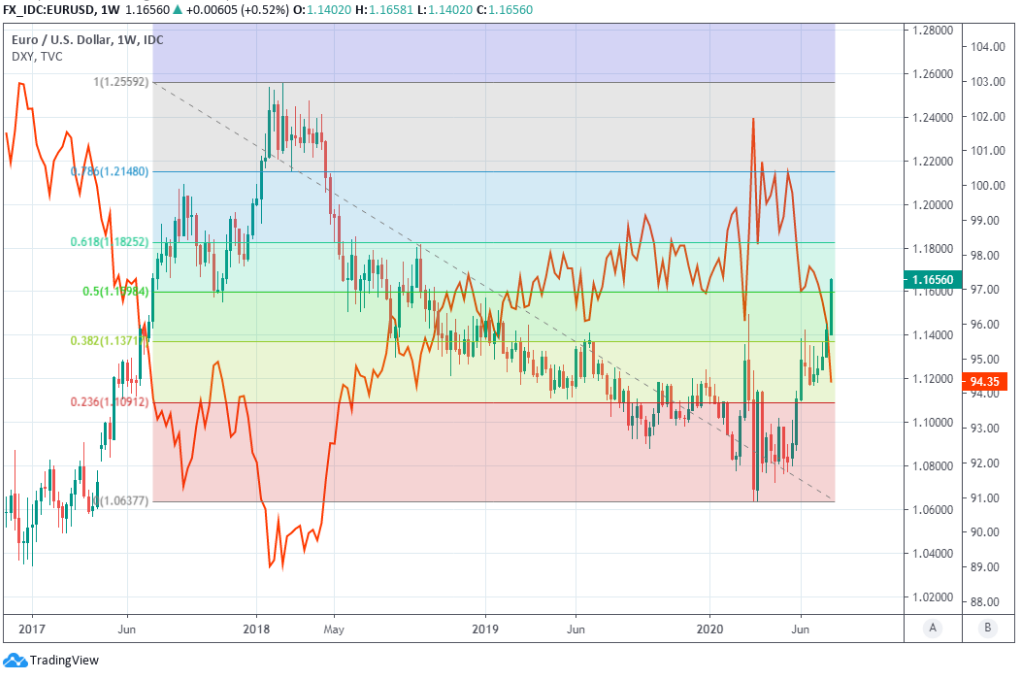 "We have a number of warning signals now and would allow for a minor dip back ahead of further gains, but acknowledge that the market remains bid. Above 1.1635 we will simply go with it and look for the move to 1.1815/33, this a 61.8% Fibonacci retracement, a 12 year resistance line and the September 2018 high. This is highly likely to hold the initial test. Ideally dips lower will be contained by the 2 month uptrend at 1.1371," says Karen Jones, head of technical analysis for currencies, commodities and bonds at Commerzbank.

Europe's single currency was resilient as risk appetite soured and stock markets turned lower late last week but the danger is that a renewed investor focus upon infection numbers could see this relative immunity fade, encouraging a correction that drags it lower and enables a rebound in the Dollar. GDP data from across the Eurozone and the U.S. will also be an important influence too given that investors have generally taken a rosier view of the Eurozone's coronavirus containment and recovery prospects than they have with others.

"Worsening economic data out of the US, renewed uncertainty about the looming ‘fiscal cliff’, and a continued escalation of tensions between the US and China, probably all played some part in dampening the mood," says Jonas Goltermann at Capital Economics. "We expect the first estimates of Q2 GDP in the euro-zone to confirm that there has been a huge variation in economic performance between countries. Our best guess is that GDP slumped by 20% q/q in Spain but only by 5% in Germany."

The European calendar kicks off with the German Ifo survey of analyst sentiment on Monday but GDP figures are arguably the highlight of the week. Those are out from 09:00 Thursday when Germany is expected to report a -9% fall for the second quarter, although France is seen declaring a -15.2% fall on Friday at 06:30 while the Eurozone economy is expected to have shrank by -12%. The latter data is out at 10:00 Friday.

U.S. GDP data will also garner attention given that it's widely expected to reveal a siesmic -35% fall for the quarter when the economy already having underperformed in the opening months of the year where it clocked up a -5.% decline. Confirmation of continued underperformance might lend support to the Euro at the tailend of the week.

However, given the scale of the decline expected and the single currency's seven percent rebound in the last three months, which has driven the Dollar Index back to pre-liquidity crisis lows from March, the exchange rate may be poorly positioned for any large upside suprise in the U.S. number.