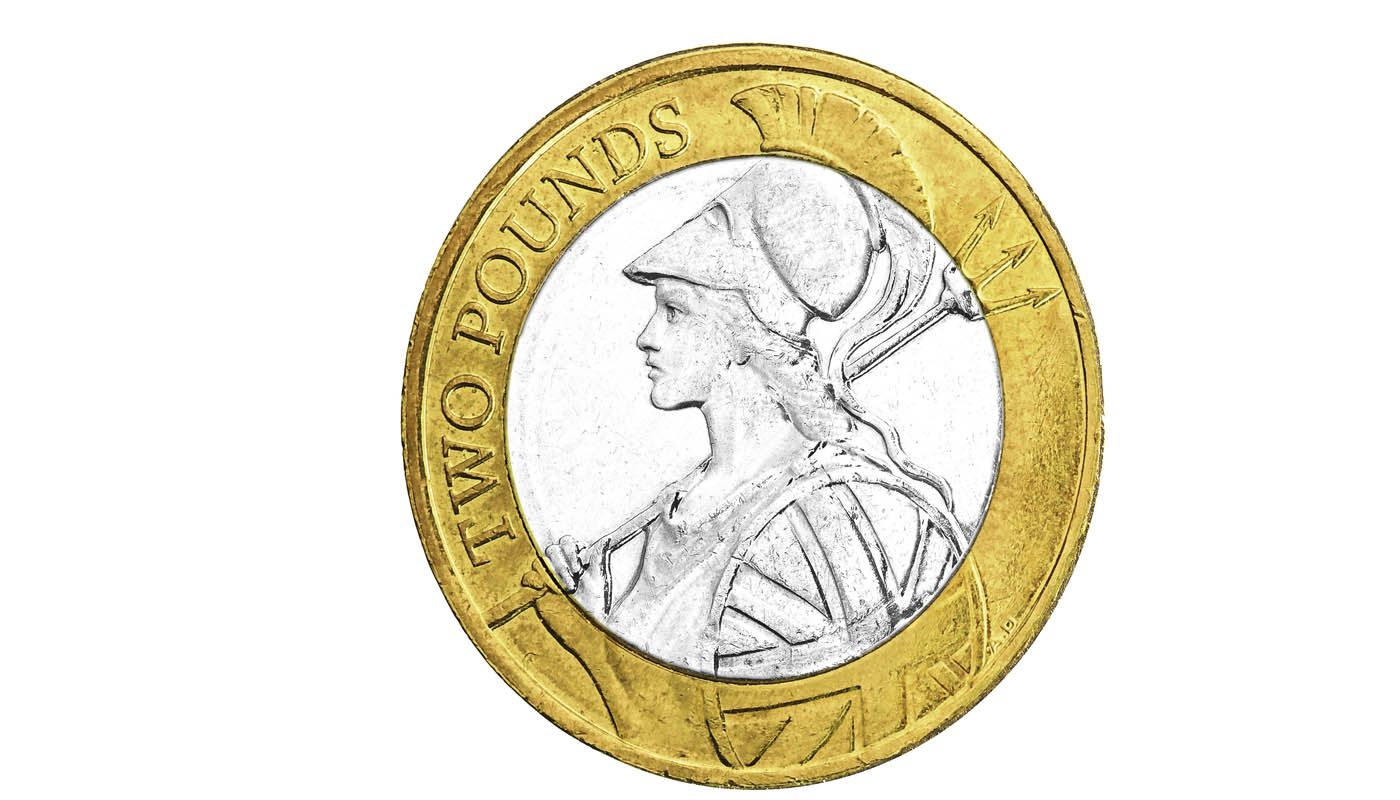 The Pound-to-Euro rate is quoted at 1.0965, which means a key level of support in the form of the 61.8% Fibonacci retracement of its March recovery now lies just inches away at 1.0911.

This and relatively nearby support for the Pound-to-Dollar rate, combined with an overextended Euro-to-Dollar rate, means the path of least resistance for Sterling could well be to the upside in the days ahead.

But with the charts still giving off bearish signals, what matters most for the outlook is if Sterling can overcome its 55-day moving average at 1.1118. 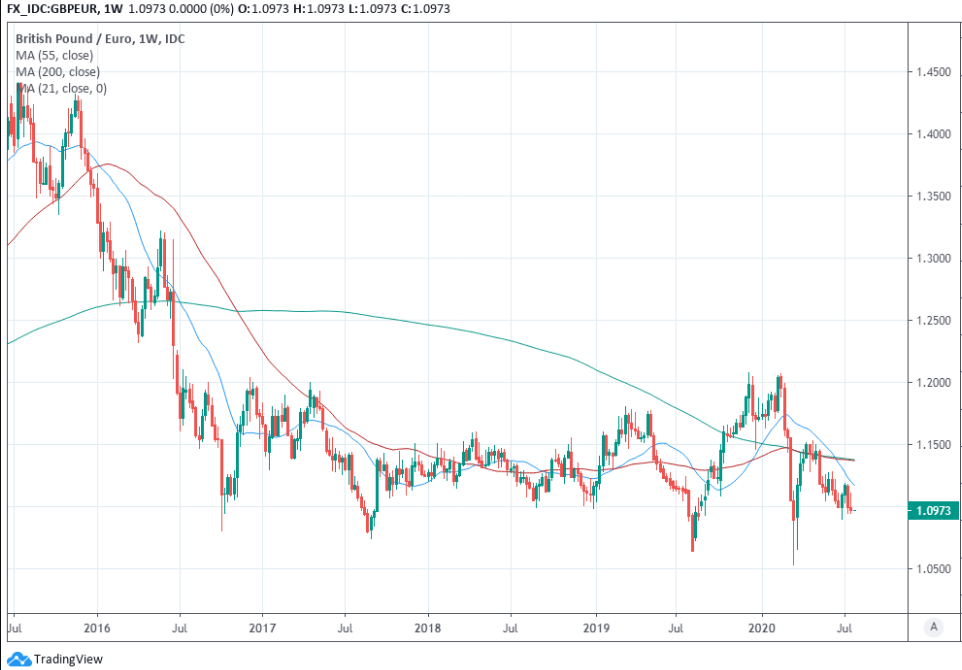 Above: Pound-to-Euro rate shown at weekly intervals with 21, 55 (red) and 200-week moving-averages (green).

Karen Jones, head of technical analysis for currencies, commodities and bonds at Commerzbank. says the Pound's outlook remains negative against the Euro provided the GBP/EUR exchange rate trades below the 55 day moving average, rallies in Sterling should find initial resistance around 1.11 says Jones, ahead of the 1.1130 5-month resistance line and 1.1196 high achieved last week.

Commerzbank's technical team are sellers of Sterling from 1.1049 and are looking for a move down to 1.0525 over the next one-to-three months, but they would walk away from the trade if Sterling hit 1.1142.

That's above the 55-day average that is a bit of a fault line for the tecnnical outlook. EUR/USD and GBP/USD support levels flagged by Commerzbank suggest a GBP/EUR of 1.0975 in a Dollar correction scenario.

This is also the week's starting point and as a result would require Sterling and the Euro to receive an almost equal drubbing in the week ahead in order to be maintaned and it's far from assured that they will. 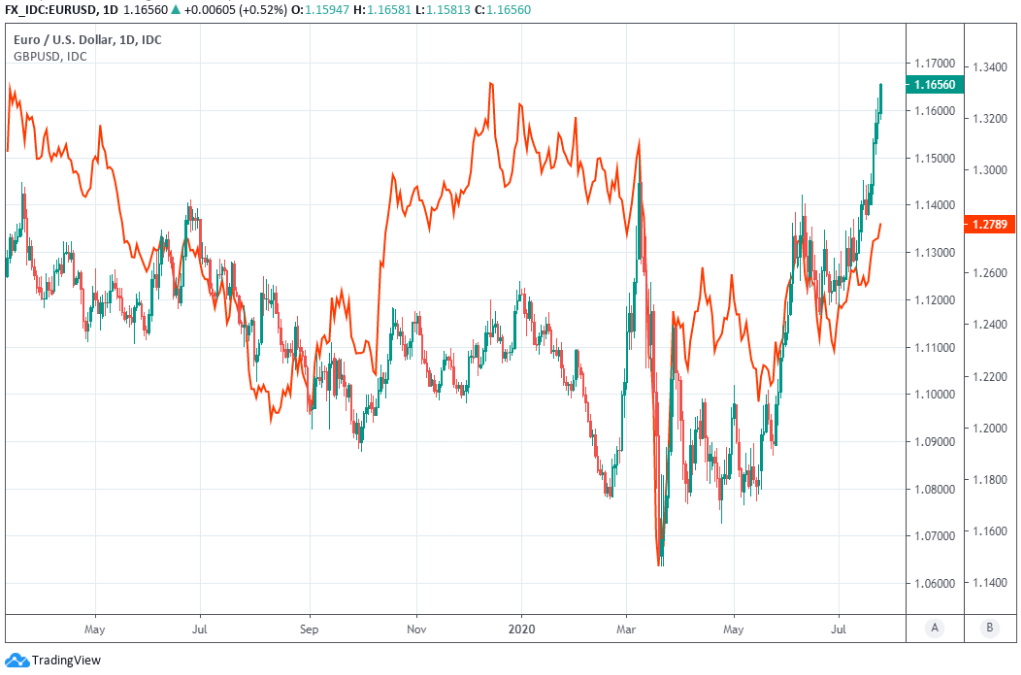 A Pound-to-Dollar rate that fell back to its 55-week average around 1.2608, while EUR/USD corrected to somewhere between the two-month uptrend at 1.1371 identified by Jones as a possible support and the first Fibonacci retracement of its May rally higher around 1.1450, would lift the Pound-to-Euro rate to somewhere between 1.10 and 1.11 this week. But such a pidling gain would still leave the downtrend in the exchange rate alive and well.

It would take greater resilience from Sterling to lift the Pound-to-Euro rate above 1.11. If the Pound-to-Dollar rate was to find support around 1.2675, a level that Scotiabank has one eye on, then GBP/EUR would rise to between 1.1146 and 1.1372 in the week ahead if EUR/USD corrects lower. 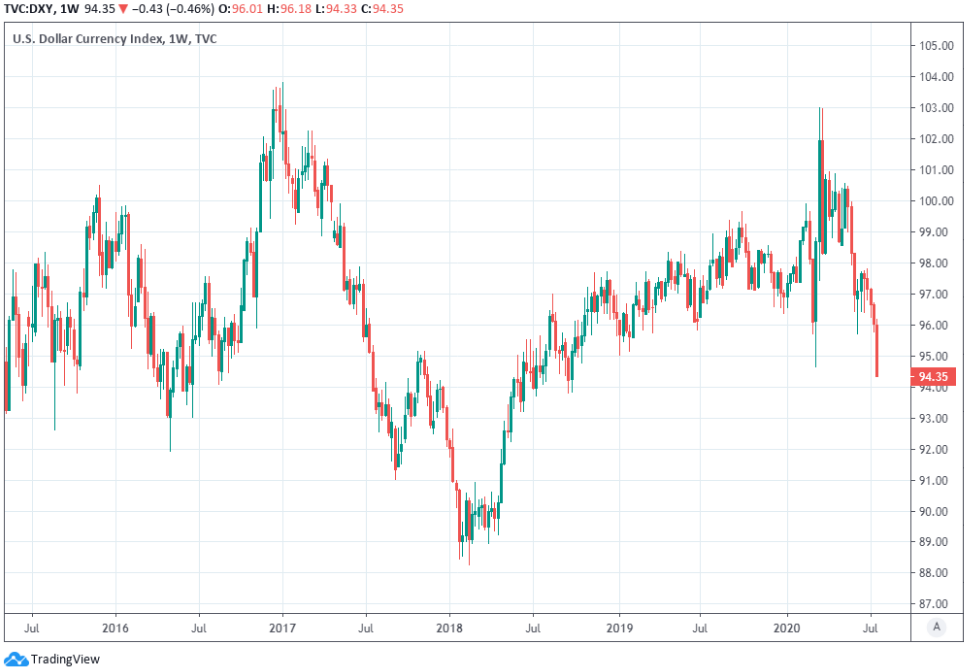 The Euro-to-Dollar rate has risen 7.5% in the last three months while the GBP/USD has advanced just 3% so a Dollar correction scenario could conceivable see the single currency outpacing Sterling in a race to the bottom, which would lift the Pound-to-Euro rate.

Sterling ended the last week on the front foot after economic data challenged the popular perception of a UK economy lagging far behind its continental rivals in the race out of the coronavirus trough, leaving the British currency vying with the Euro for third place in the major currency performance rankings for the week.

The Euro's recent rally could meanwhile be questioned by growing concerns over rising covid-19 infections in Spain, suggest analysts.

"Spain’s near 10k new COVID cases since Monday could raise concerns over Europe’s progress on containing the virus. Escalations in Japan and Hong Kong could further undermine the belief that only the US is experiencing problems," says Derek Halpenny, head of research, global markets EMEA and international securities at MUFG. "The euro has advanced to new highs but emerging risk-off sentiment related to China and tech stocks in the US could mean some near-term reversal of USD selling is imminent." 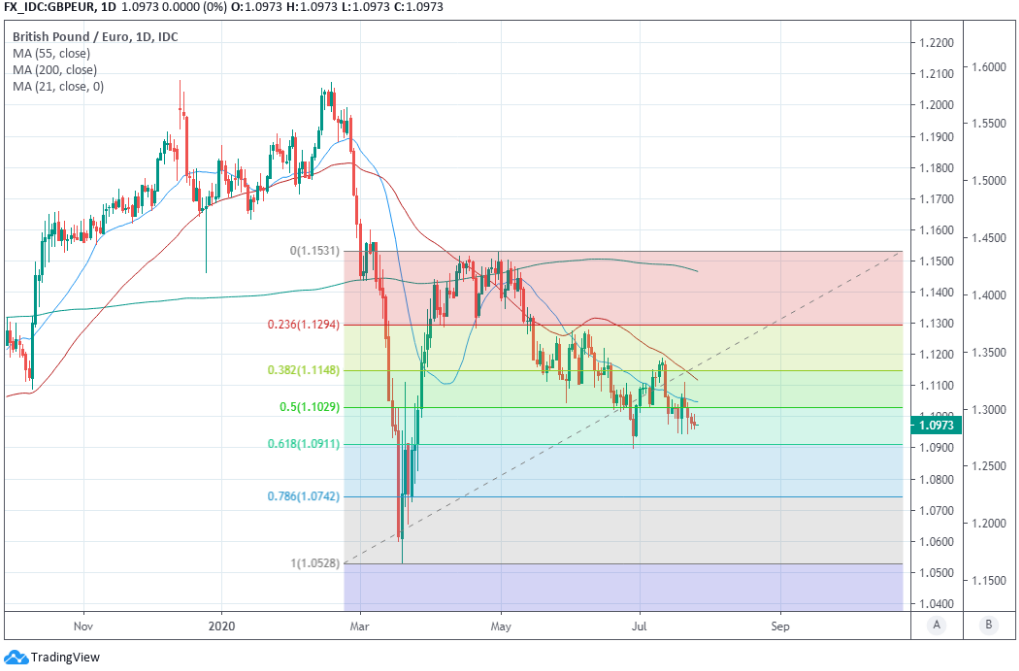 The British government ordered at the weekend that residents returning from Spain self-quarantine after the Mediterranean country opened its doors to sun-seekers and was rewarded with a spike in new infections that's since got Europe contemplating tighter border restrictions on the mainland. Spain was removed from the UK travel corrridors exemption list.

"The timeliest available relate to the retail margin flows. Data available to us indicate a common feature in these flows – Japanese retail traders are selling the EUR rally," Halpenny says. "Official ECB data showed strong demand for EZ equities in April and May and ETF flow data suggests that continued in June but may have now faded somewhat. Increased COVID cases in Europe could reverse flows & the EUR from higher levels."

Rising Spanish infections come alongside increases in places Japan and Hong Kong, with these taking place as mounting outbreaks in a rising number of troubled emerging market countries pushed the United Kingdom down to ninth spot in the global size order of outbreaks. The badly oversold U.S. Dollar has been penalised for its own second wave storm in recent weeks but given the global catch-up, could be due an upward correction over the coming days.

Sterling was lifted Friday when retail sales surged and IHS Markit PMI surveys pulled ahead of their Eurozone counterparts for July, although GDP data from across the Eurozone and the direction of the U.S. Dollar may be the most important influences this week.

A Dollar correction would favour a higher Pound-to-Euro rate largely for mechanical reasons although worse-than-expected Eurozone GDP data - due out Friday - might offer such a rebound some fundamental support.

Sterling has already been punished for its comparatively worse economic damage in April and the near absence of a rebound in May, which has left consensus looking for an -18.2% quarter-on-quarter decline for the three months to the end of June.

Consensus looks on Friday for the Eurozone figure to reveal a -12% quarterly fall, which would follow a -3.6% first quarter contraction.

"Given that this recession has been led by the services sector, Germany may escape the worst of it, given that it has a higher manufacturing/GDP ratio than most other EZ countries. The EZ overall should do a bit better than the ECB's -13.0% forecast, but not nearly enough for a premature end to PEPP," says James Rossiter, head of global macro strategy at TD Securities.

Investors are well accustomed to the risk of a UK economic underperformance that was challenged last week, but have generally taken a rosier view of the Eurozone's coronavirus experience to date as well as its recovery prospects. This week will see that rosier view tested, beginning at 09:00 Thursday with German GDP data and continuing into Friday when French figures are released at 06:30 beofre the Eurozone number at 10:00.

The data will be released as the world's financial markets again turn their attention to daily disclosures of coronavirus infection numbers from European capitals and potentially, amid an upside correction in the Dollar. 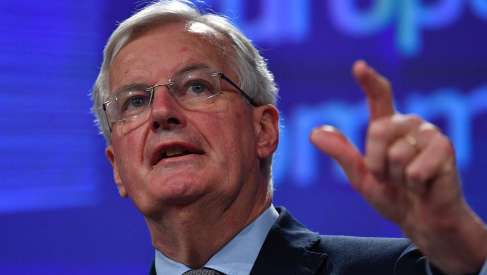