- After ZEW survey warns of economic turbulence ahead.

- Markets in risk-off mood as investors count vost of virus.

Europe's largest economy has been left reeling by the ongoing coronavirus crisis in China, the latest Leibniz Centre for European Economic Research (ZEW) survey suggested on Tuesday, with the virus driving a slump in the current situation as well as six-month outlook components of the survey.

This is a further blow to a Euro-to-Dollar rate that's under siege from a toxic cocktail of headwinds that have already prompted downgrades to forecasts.

"The feared negative effects of the Coronavirus epidemic in China on world trade have been causing a considerable decline of the ZEW Indicator of Economic Sentiment for Germany. Expectations regarding the development of the export-intensive sectors of the economy have dropped particularly sharply," says Professor Achim Wambach, president of the ZEW institute.

Above: ZEW Economic Expectations index falls to 8.7 in January 2020.

The ZEW expectations index plummeted 18 points to 8.7 in January while the current conditions barometer fell 6.2 points to -15.7 last month as financial market analysts responded to the survey with expressions of fear about what coronavirus contaiment measures will do to the world's second largest economy.

Tuesday's survey comes just days after Destatis figures showed Germany's economy grinding to a halt in the final quarter, before markets had even a whiff of a coronavirus threat. And it was released on a morning when markets were in a risk-off mood as investors attempted to count the likely cost of the virus.

ZEW's survey asks 300 financial analysts for opinions on questions relating to the markets and economy. Both survey components had risen in recent months, indicating a less dour outlook in response to October's Brexit withdrawal agreement and the 'phase one deal' struck between the U.S. and China.

"This is the first clear sign of a hit from the coronavirus in the EZ sentiment data. The month-to-month drop in the expectations gauge was the biggest since the middle of last year, and this headline usually don’t swing by that much," says Claus Vistesen, chief Eurozone economist at Pantheon Macroeconomics. "Expect the headline investor sentiment surveys to dip further in the near term as major listed corporates start to count the cost of sharp slowdown in China’s economy in Q1. Apple’s warning on its Q1 earnings and unit supplies overnight is just one example, but it is representative, we think, of what comes next." 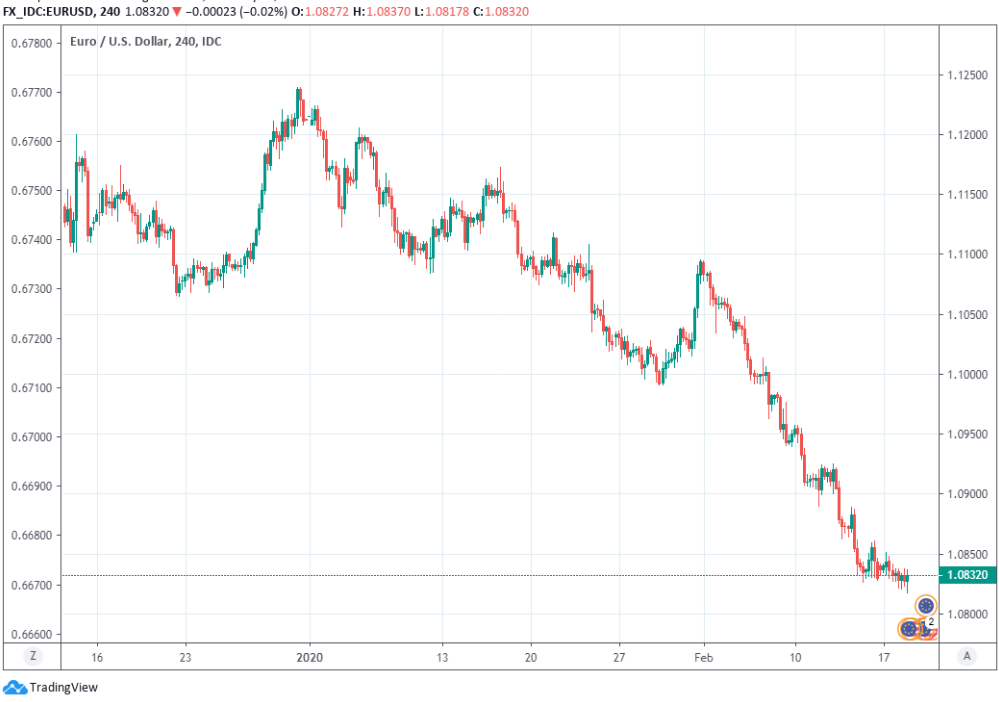 "We think the low volatility environment is ending. EUR/USD 1 month ATM implied volatility has reversed form the 2007-2020 support line and one year support line and has divergence on the weekly RSI," warns Karen Jones, head of technical analysis for currencies, commodities and bonds at Commerzbank. "EUR/USD remains weak and on course for the 1.0763 2000-2020 uptrend which is expected to hold."

Tuesday's data relates to the first month of 2020 and the opening of a quarter that threatens to be an economic write-off for Europe's largest economy and many others around the world. Germany's economy already stalled with zero growth last quarter while the French and Italian economies contracted.

"If downside risks were to materialise, fiscal responses should be differentiated, aiming for a more supportive stance at the aggregate level, while ensuring full respect of the Stability and Growth Pact," - European Council, Tuesday 18 February.

China's economy has been brought to a standstill since late January by a combination of public fears over the infection spreading there and government measures to contain it, both of which are severely disrupting multinational consumer electronics and automotive firms' supply chains. The rub for the Euro is that many of those automotive firms are headquartered in Germany.

Germany and the broader Eurozone were badly wounded in the 2018-2020 trade fight between the U.S. and China because of their close trade relationship with the world's second largest economy, which indicates that they could also be burned badly in the fallout from the coronavirus. Markets have been sanguine about the threat posed by the virus but the slow and steady crystalisation of its costs could test investors' nerves over the coming weeks and months. 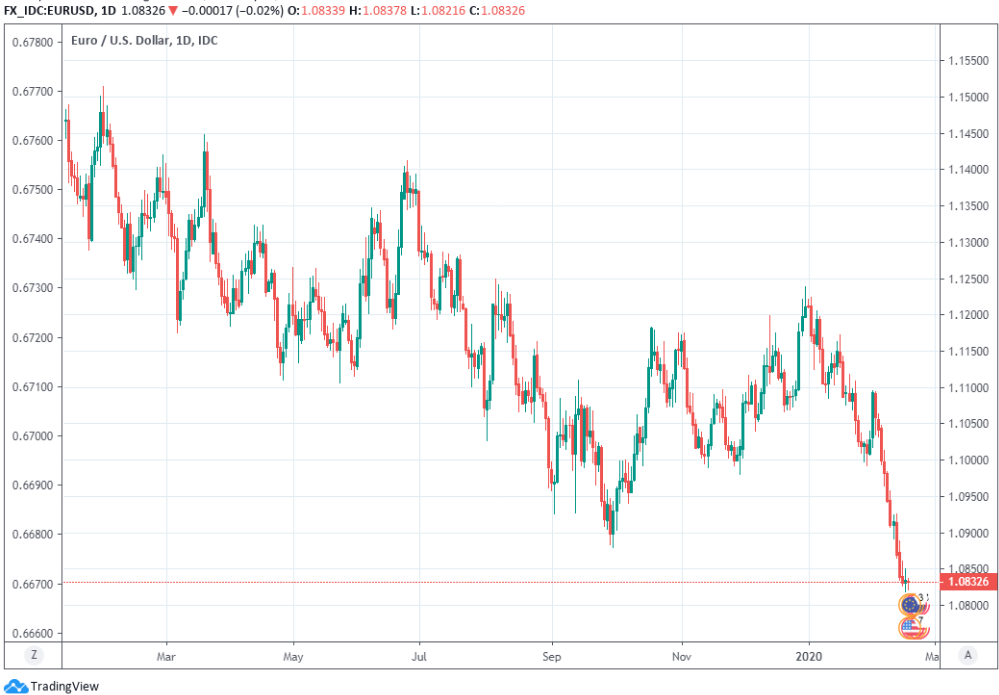 "This equally points to fairly unexciting EUR prospects and the continuation of the EUR/USD downtrend as the mix of soft EZ data, the market pricing renewed ECB deposit rate cuts and attractive euro funding characteristics do not bode well for the currency. Breaking the EUR/USD 1.0800 level seems to be a question of when rather than if," says Petr Krpata, chief EMEA strategist for currencies and bonds at ING.

Europe's single currency has fallen through several key technical support levels in recent weeks as investors responded first to the overtures of a strengthening Dollar, which has been buoyed by economic outperformance from the U.S. and safe-haven demand, and more more recently signs of renewed economic underperformance in the Eurozone. Annual growth fell to 1% in the Eurozone last quarter, which is less than half the steady 2.1% seen over in the U.S.

China's globally important and manufacturing intensive economy now faces what must surely be a steep contraction for at least the first quarter of 2020, with likely knock-on impacts in Europe and elsewhere, while the relatively closed nature of the U.S. economy is seen providing it a partial shield from the fallout. And given the Euro still follows the ever-widening EU-US growth differential, this can only mean more trouble ahead for the single currency.