- In slowest expansion since 2013 amid export weakness.

- Consumer side of economy also softened into year-end.

- But coronavirus crisis about to bite wounded car industry.

- And Hubei province an integral part of auto supply chains.

Europe's largest economy grew by just 0.6% for 2019, Destatis revealed on Friday, although the annualised quarterly growth rate was even weaker than that at just 0.3% for the final quarter. That makes 2019 the slowest German economic expansion since 2013, the year immediately after the debt crisis that nearly broke up the Eurozone.

This was after the German economy ground to a halt in the final quarter, with growth falling to 0% from 0.2% previously, leaving GDP unchanged heading into year-end. Ominously, the export sector was a big driver of the weakness although the domestic side of the economy also softened too.

"Our chart brings out the shifts in demand that are driving German GDP," says Holger Schieding, chief economist at Berenberg. "When export growth started to stall in late 2018 under the impact of trade war uncertainties, Brexit risks and a generic Chinese slowdown, net exports subtracted from GDP growth. In response to these external shocks, companies curtailed their inventories strongly over the course of last year." 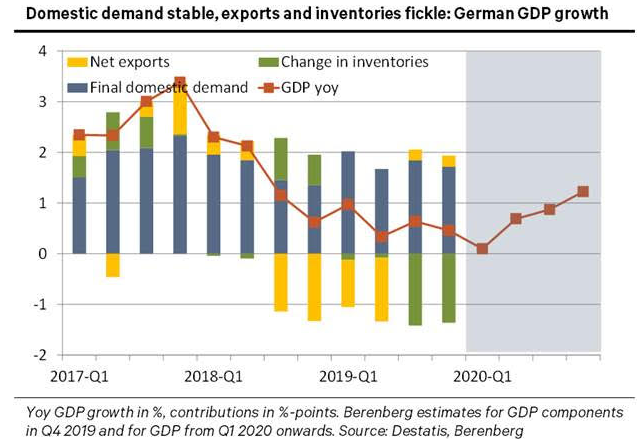 German exports of goods and services fell in the final quarter,. Destatis says, while imports increased. That could have driven a GDP-reducing decline in 'net trade' for the period, although markets won't know until the second and more detailed estimate is released next month.

Meanwhile, growth in both household and government consumption slowed. Business investment in machinery and equipment slumped while firms continued to plow money into construction projects and other "fixed assets".

The surprise in Germany increases the risk of Eurostat downgrading its first quarterly estimate of Eurozone growth from the preliminary 0.1% to 0% at 10:00 on Friday, according to some economists. The Italian and French economies contracted last quarter while Spain saw a strong expansion.

"The key question with these data is whether the second Q4 GDP estimate in the EZ as a whole is now set for a downward revision later today. We think it is," says Claus Vistesen, chief Eurozone economist at Pantheon Macroeconomics. "Growth in Germany has slumped to around zero in the past three quarters, more-or-less in line with the headline surveys. The January surveys were optimistic, though still weak overall, but now the coronavirus hit looms." 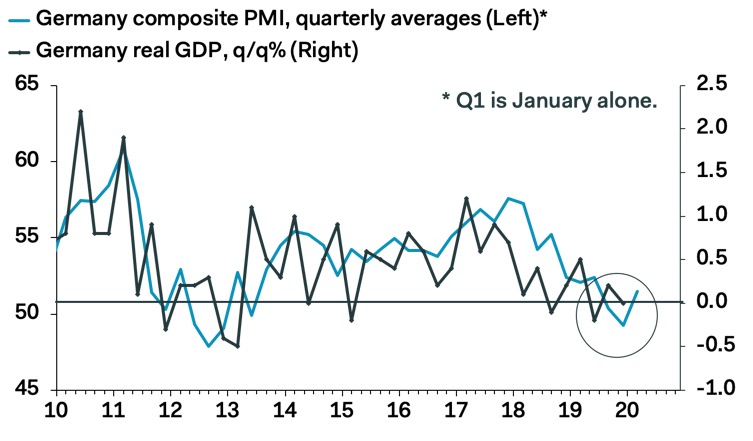 Tellingly for economy-watchers, Germany received no obvious boost late last year from the either the Brexit agreement struck between British Prime Minister Boris Johnson and the EU, or the 'phase one deal' that has so-far curtailed the trade war between the U.S. and China.

The October Brexit agreement marked the beginning of a slow but steady elimination of imminent 'no deal' Brexit risk to importers and exporters across Europe while ending the trade war, even if only temporarily, has prevented additional damage to China's economy and averted a possible further retrenchment of international trade.

But the real rub for Germany and many other European economies is that Friday's figures relate only to a period in which the Chinese economy was unencumbred by the coronavirus that's turned major cities of many millions of people into ghost towns since early January.

"The collapse in Chinese production is going to take its toll on growth far beyond the borders of the Middle Kingdom," says Davide Oneglia, an economist at TS Lombard. "China is the destination of about 17% of overall car exports for the euro area (EA) average. In turn, motor vehicles are the EA’s single biggest export to China (~17% of the total). We're not surprised to see those percentages rise when we look at Germany in isolation." 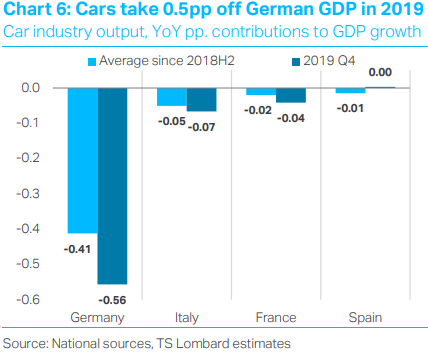 The Chinese economy now faces a sharp contraction in at least the first quarter which could meaningfully reduce 2020 GDP growth even if the coronavirus infection is brought under control within the period. And such a slowdown is likely to be bad news for Germany and the Eurozone, which arguably suffered more than both protagonists in the U.S.-China trade war.

China is a significant trading partner for all economies but it's especially important to the Eurozone and for the global car industry. This in part because Chinese demand represents around 30% of the global market while the big four Eurozone countries have a similarly sized share of supply.

The number of new infections declared by Chinese authorities appears to have risen in recent days, with 5,090 additional cases confirmed on Friday along with a further 121 deaths. This is after another 15,152 new confirmed cases were announced Thursday, with 254 new deaths.

"Hubei, where the epidemic originated, is a large car industry hub. While factories regularly shut down for Chinese New Year, the protracted lockdown of the province has put the auto sector’s long supply chains under strain. Some of the largest global car manufacturers have issued warnings about their ability to continue production in Europe if the situation persists until the end of the month. At present, we estimate capacity use in China to be 30%," Oneglia says.