The Euro-to-Dollar rate steadied on Thursday following punishing losses in the prior session although it could now be poised to bounce higher on a temporary basis as financial markets respond to a sharp, surprise increase in the number of new coronavirus cases confirmed in China.

Europe's unified unit is popular as a 'funding currency' so it often behaves like a 'safe haven' by rising during times of risk aversion only to hand back gains and slip lower when risk appetite recovers. Some say that relationship explains part of the loss suffered by the Euro on Wednesday, albeit that the prior session's decline was initially prompted by dire economic figures.

"The single currency had benefited from an increase in risk aversion on the markets as a result of the corona virus, or as it is now called covid-19 virus, albeit to a smaller extent than the dollar," says Thu Lan Nguyen, an analyst at Commerzbank, before addressing the Euro's Wednesday declines. "Now that the fears are easing the euro strength is seeing a correction."

The Euro is one of the largest and most liquid currencies on the market while the ECB's low rates make it super cheap for investors to borrow.

And in recent years the combination of those things has meant that when investors are in an upbeat mood they tend to borrow and then sell Euros in order to 'fund' bets on higher-yielding assets further afield.

Those 'carry trades" can result in the Euro-to-Dollar rate falling as stocks, commodities and emerging market currencies rise, only for the tables to turn as the proverbial apple cart rolls over.

"Another side-effect of negative rates is rising cross-border lending by European entities, leading to EUR outflows. The long carry trade has been in vogue for EUR, which is also clear from positioning data in the leveraged space. Offsetting the substantial current account surplus and also net FDI inflows we’ve seen too," says Jordan Rochester, a strategist at Nomura in a January note to clients. 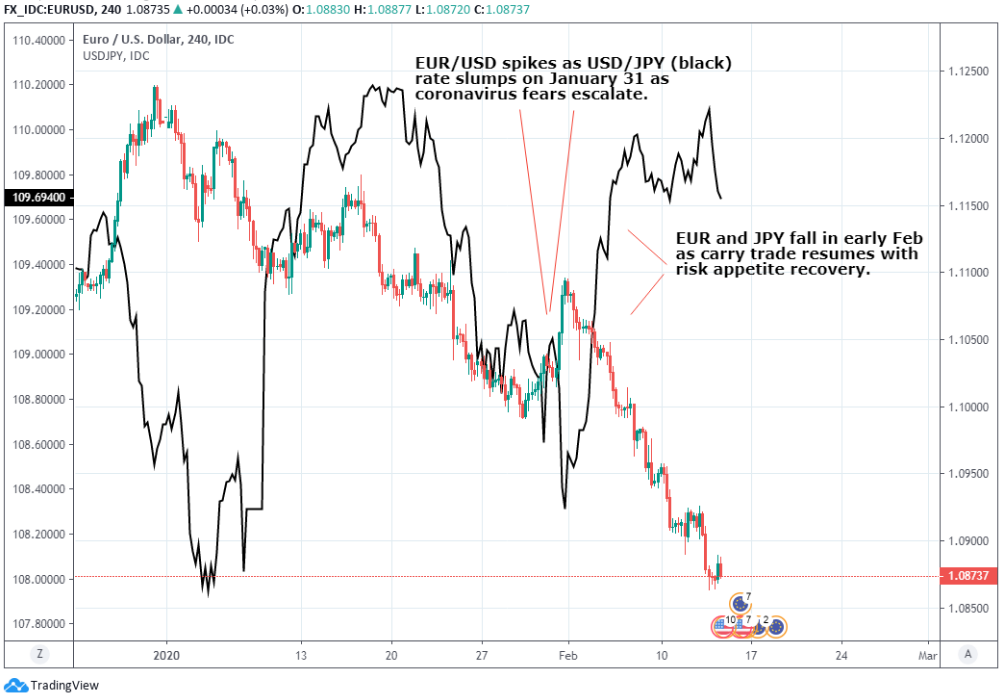 Above: Euro-to-Dollar rate at 4-hour intervals, alongside USD/JPY rate.

Thursday's open saw broad declines in European stocks accompanied by losses in industrial commodities, both of which might risk unravelling this week's gains for emerging market currencies later in the sessio. And if they do then the Euro might benefit, albeit only temporarily.

Stocks and emerging market currencies had risen throughout the first half of the week as investors elected to focus on steady declines in the number of new cases declared on a daily basis, inferring from it that an end to the outbreak might have been in the pipeline, although that assumption was made to appear eroneous on Thursday.

China's National Health Commission reported 15,152 new confirmed cases overnight and 254 new deaths, with both declarations setting new records for their respective categories. That takes the total number of cases to 52,526, up from just 14,380 on February 01, while the number of deaths has risen from 304 to 1,367 in the same period.

"Those market quants who have been merrily looking at the recent decline in the day-to-day new virus cases woke to a shock this morning. Hubei province has revised its definition of a virus infection and the total is a stunning leap: we now have 15,408 new cases in one day, dwarfing what we have seen so far in a week," says Michael Every, a Hong-Kong based strategist at Rabobank. 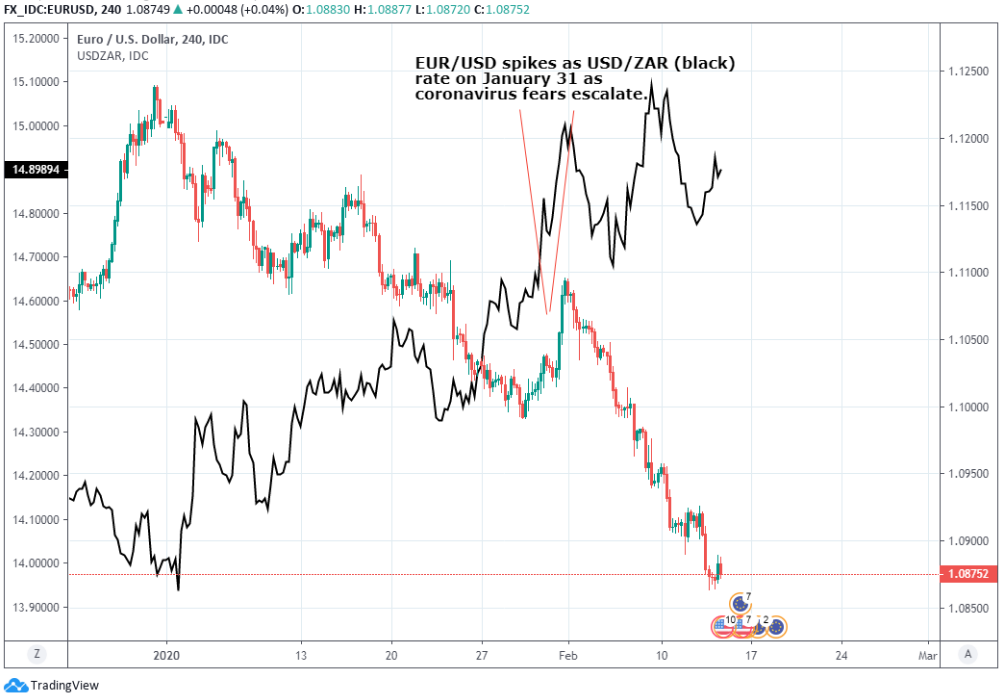 Above: Euro-to-Dollar rate at 4-hour intervals, alongside USD/JPY rate.

Some 13,332 of Thursday's new cases were declared by Hubei province, the centre of the outbreak, after it began using "clinical diagnosis" methods in addition to nucleic acid tests.The change comes days after World Health Organization officials landed on the ground in China for the first time and in the wake of much speculation about the reliability of the government's disclosures.

If Thursday's numbers are the beginning of a fresh climb in the growth rate for infections then emerging market currencies might wobble heading into the weekend, potentially providing the Euro with some respite from earlier losses as investors buy back the Euro in order to close out earlier trade.

China's Yuan was steady early on Thursday and so too was South Africa's Rand, demonstrating resilience in the face of weaker stock and oil prices, although that picture could change ahead of the weekend.

However, any relief for the Euro might only be temporary given the Eurozone is arguably the most exposed to a slowdown in the Chinese economy, and the bloc was already struggling to begin with.

"Rallies towards 1.1050 should be sold," says Shahab Jalinoos, head of FX strategy at Credit Suisse. "A clear break below October lows around 1.0880 would herald a move to a new medium-term target around 1.0650 on a 3-month horizon, especially if the backdrop is falling oil prices and euro area inflation expectations. Sell rallies is still our EURUSD message." 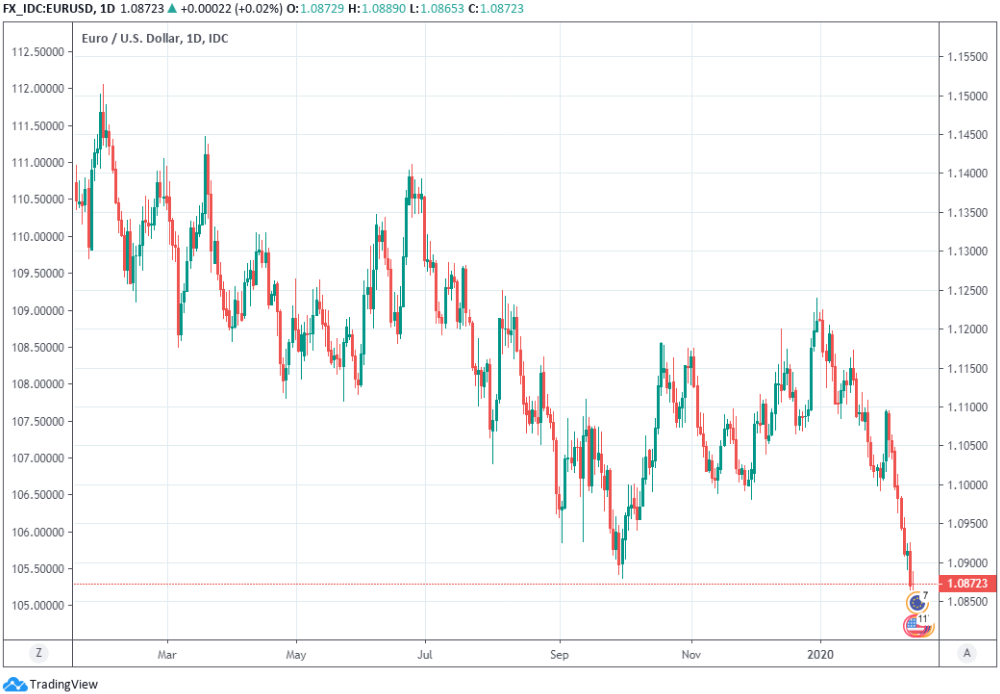 Incoming data is painting a bleak picture of the Eurozone economy, leading some in the market to suggest the European Central Bank could be forced to cut its already-deeply-negative deposit rate even further below zero in the months ahead in the hope of reviving the bloc's economic pulse.

"EURUSD has now settled into a range at 1.08650 to 1.08750. It’s been one way traffic for the euro and may continue - the path to 1.05 is not brimming with barriers. The path of least resistance is to the downside," says Mark Wilson, chief market analyst at Markets.com. "The euro is weaker for several reasons but the deterioration in industrial production numbers yesterday was important...The disruption to supply chains from the coronavirus could hardly come at a worse time."

Europe's single currency was left bleeding early in the Wednesday session by Eurostat figures that revealed a surprise -.21% decline in Eurozone industrial production for December, confirming the continent's mighty factory sector continued to shrink into year-end. That data follows other figures that showed both French and Italian economies contracting in the final quarter and comes just days ahead of Germany's latest economic growth figures.

"The fact that Italy’s economy is in poor shape will not surprise anyone following the euro area, but the advance Q4 GDP headline was astonishingly poor all the same. Real GDP fell by 0.3% quarter-on-quarter," says Claus Vistesen, chief Eurozone economist at Pantheon Macroeconomics. "This is the weakest quarterly performance since the sovereign debt crisis, raising the spectre that Italy has now entered a double-dip recession."

Economic data is deteriorating on the continent at the same time as the U.S. economy is again displays its exceptionalist credentials, which has led investors to second-guess a months-old assumption that the ECB won't cut its deposit rate again any time soon while also making the market's wagers on 2020 rate cuts from the Federal Reserve (Fed) even harder to sustain.

And all of that is further entrenching an already deeply disadvantageous interest rate differential of nearly 2%, which provides a meaningful incentive for investors to sell the Euro and buy the Dollar during ordinary times.