The Euro-Dollar exchange rate has slipped below the key 1.09 level to reach its lowest level since 2017 at 1.0865, and further gains could be in store as foreign exchange markets appear to be in the process of pricing in fresh action at European Central Bank (ECB). Indeed, a leading Swiss investment bank has said it now expects the ECB to cut interest rates once more in 2020, a move that will lead to further weakness in the single currency.

Analysts at Credit Suisse say they are expecting a 10 basis point interest rate cut at the ECB in the second quarter of 2020, as the soft recovery in the Eurozone economy takes a hit from the coronavirus.

The coronavirus outbreak can be described as a 'black swan' event for the global economy as it triggers a severe shut-down in Chinese economic activity, which could take months to recover depending on the severity of the outbreak.

The outbreak started in late 2019, just as investors and businesses were gearing up for a pickup in activity courtesy of the reaching of a 'phase 1' trade deal between the U.S. and China.

Anxieties over trade between the world's two largest economies had in turn been blamed for the notable manufacturing recession suffered in Germany during 2019. The consensus amongst the analyst community was that 2020 would be a year in which a return to export outperformance by Germany - the Eurozone's manufacturing engine - would be achieved.

"We would not underestimate the effects of supply chain disruption. Automakers in Japan, South Korea and Europe have already announced that shortages of components could, or have already, lead to suspended production," says Hill.

German industrial production was last week reported to have fallen 3.5% in December, more than reversing the decent 1.2% increase of November and disappointing a market that had looked for a 0.2% gain.

The news comes hard on the heels of factory orders that fell sharply for same month, with both following other data that showed the French and Italian economies contracting in the final quarter.

The Euro suffered a fifth consecutive decline in the wake of the data and is increasingly at risk of more losses as economic woes on the continent grow at a time when the U.S. economy is again displaying an exceptionalism in terms of economic growth.

The coronavirus-inspired downturn likely be reflected in the data which comes out in late-February and March, which will prompt the ECB to react says Hill and Credit Suisse expect a small deposit rate cut of 10 basis points which would take the rate down to -0.6%. "The tone of the next ECB Governing Council meeting – in March – will likely be dovish, opening the door to a cut in April or June if the data are sufficiently weak," says Hill.

Therefore, should the market start anticipating a cut to the ECB's interest rate the Euro would be expected to fall.

Perhaps they already expect this, indeed the Euro-to-Dollar exchange rate has fallen from 1.1090 last week to 1.0904 at the time of writing. 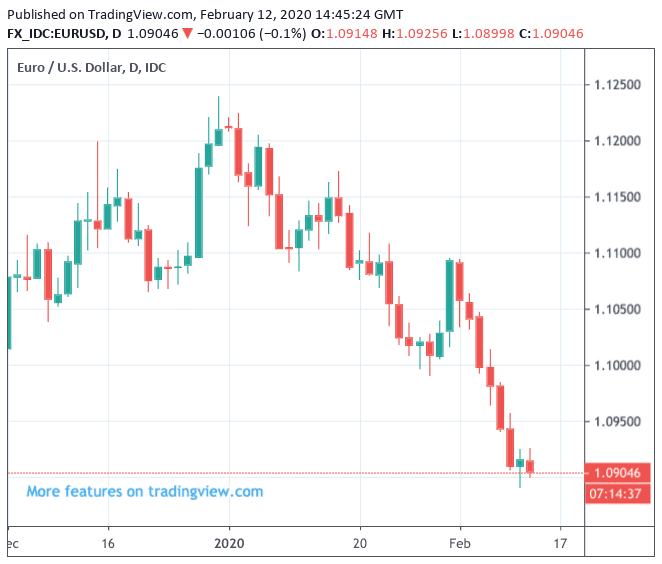 Above: Has the market already sensed a looming interest rate cut at the ECB?

Global Head of ITS Trading Strategy at Credit Suisse says the prospect of a rate cut at the ECB, "adds further fuel to our already-bearish EUR views. We see scope for EUR/USD 1.0650 and EUR/CHF 1.05 on a 3-month horizon. Softening euro area inflation expectations already hint in this direction."

But it is not just the Eurozone that will see its basic interest rate cut, the UK could also be in for a rate cut in 2020 as a result of the coronavirus outbreak.

"The market will likely assume that the UK economy is not going to escape scot free and raise its odds of BoE rate cuts too. Our 1.28-1.33 GBPUSD expected range likely still has asymmetric risk of a downside break," says Jalinoos.