- Commerzbanks eyes support at 1.10 as EUR moves to downside.

The Euro was in retreat Friday and the charts warning of further losses ahead after an influential policymaker called for the European Central Bank (ECB) to support the Eurozone economy with "significant" stimulus in September.

Olli Rehn, Governor of The Bank of Finland and a rate setter on the European Central Bank Governing Council, told the Wall Street Journal Thursday the ECB needs to announce a "significant and impactful policy package" at its next meeting. He told the paper that when it comes to financial markets and their expectations, it's better to over-deliver than it is to under-deliver.

The comments came right as markets in the were celebrating a strong set of July retail sales numbers that put the U.S. economy on its front foot at the beginning of the third quarter, a period in which surveys have suggested the ailing Eurozone likely slowed further from an already-weak pace of growth.

"EUR/USD drifted lower towards 1.1075 on rising expectations of more aggressive ECB easing and unwinding of some long EUR/GBP positons," says Elias Haddad, a strategist at Commonwealth Bank of Australia. "We anticipate a 10bps cut in the deposit rate to ‑0.50%. We also believe the ECB could introduce more TLTROs or a tiered deposit system on excess reserves to reduce the adverse effect of negative interest rates on Eurozone banks’ net interest income. Restarting asset purchases cannot be ruled out."

Strong data and rising inflation across the Atlantic have challenged the narrative that the U.S. economy will slow so sharply the Federal Reserve (Fed) is forced to cut interest rates agressively before the year is out. This has supported the Dollar and kept the Euro pinned down close to the two-year low that it reached back in July, although analyst commentary around the Euro is increasingly focusing on the single currency's own individual vulnerabilities.

Rehn's remarks also came just hours before President Donald Trump said trade talks with China are going well and that he could still meet his Chinese counterpart in September, encouraging hopes of another detente in the trade war. The Dollar rose against safe haven currencies in response to the comments, although it ceded ground to the commodity currencies.

"The response to Mr Rehn's comments yesterday was as much one of frustration however, as anything else. Talk of further ECB easing sounds like a broken smartphone. And so, all it does is drag bond yields lower and keep the euro under pressure. The only threat to EUR/JPY shorts is that this trade may be getting too consensual. That's not a good enough reason to get rid of it," says Kit Juckes, chief FX strategist at Societe Generale.

Rehn's comments have returned the market's focus to the deteriorating domestic story the comes with the Euro, which is now widely expected to result in another ECB stimulus package being unveiled. The bank said in July it's tasked staff with devising a "tiered system for reserve remuneration" and considering "options for the size and composition" of a new quantitative easing program. Its next set of policy decisions will be announced on September 12. 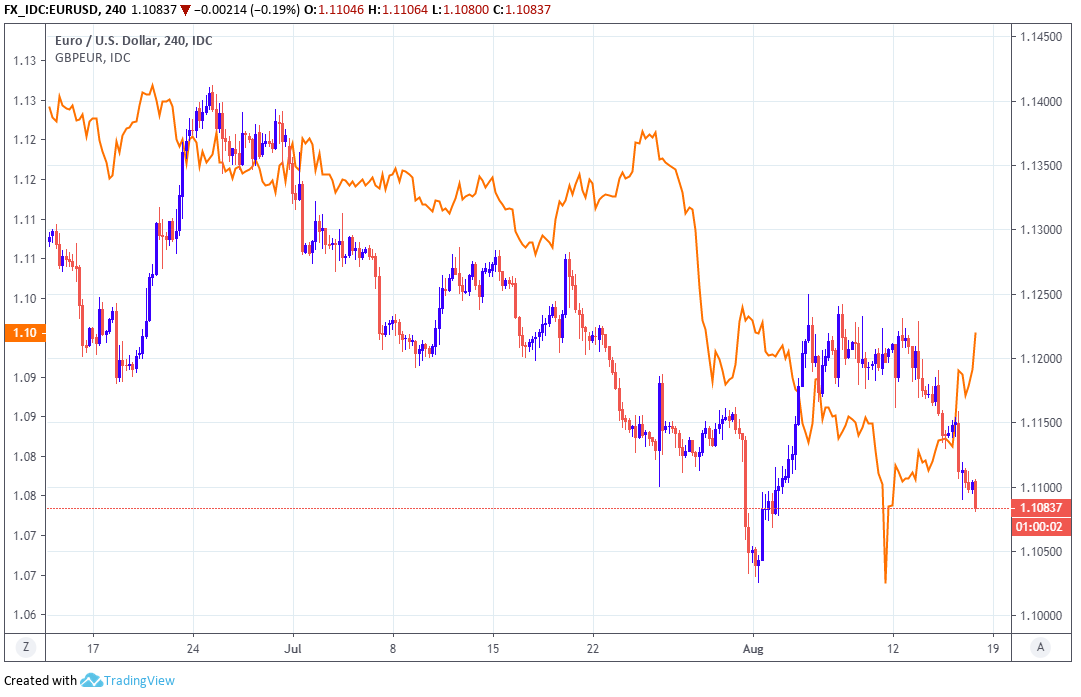 Expectations of monetary support from the ECB have mounted in recent months as the Eurozone economy outlook has gotten "worse and worse" in the words of the ECB president Mario Draghi. And this is happening when inflation, which is sensitive to growth, has already been trapped far below the ECB's target of "close to, but below 2%".

"Olli Rehn’s comments yesterday have definitely made rates markets anticipate a more dovish move. This morning rates markets are pricing in over 70% chance of a 20bps cut in the deposit rate in September, up from around 40% earlier this week," says Fritz Louw at MUFG. "If markets continue to price in an increasingly strong stimulus package in September, this could weigh further on the euro and we could see it trading closer to the 1.1000 level."

Eurozone inflation has been stuck below the ECB’s 2% target ever since November 2018 when oil prices began reversing earlier gains. If not for volatility in oil prices, the headline rate might not have seen the target level for a number of years. Core inflation, which is seen as the truer measure of price pressures, has not been above 1.3% at all in the four years since the ECB began it quantitative easing programme.

The ECB needs faster economic growth in order to get inflation back to the target, although the Eurozone economy is slowing rapidly due to its exposure to the twin threat of the U.S.-China trade war and the ongoing Brexit process. The German economy contracted for a second time in the last year during the second quarter, and Eurozone GDP growth fell by half to 0.2% on a quarterly basis. 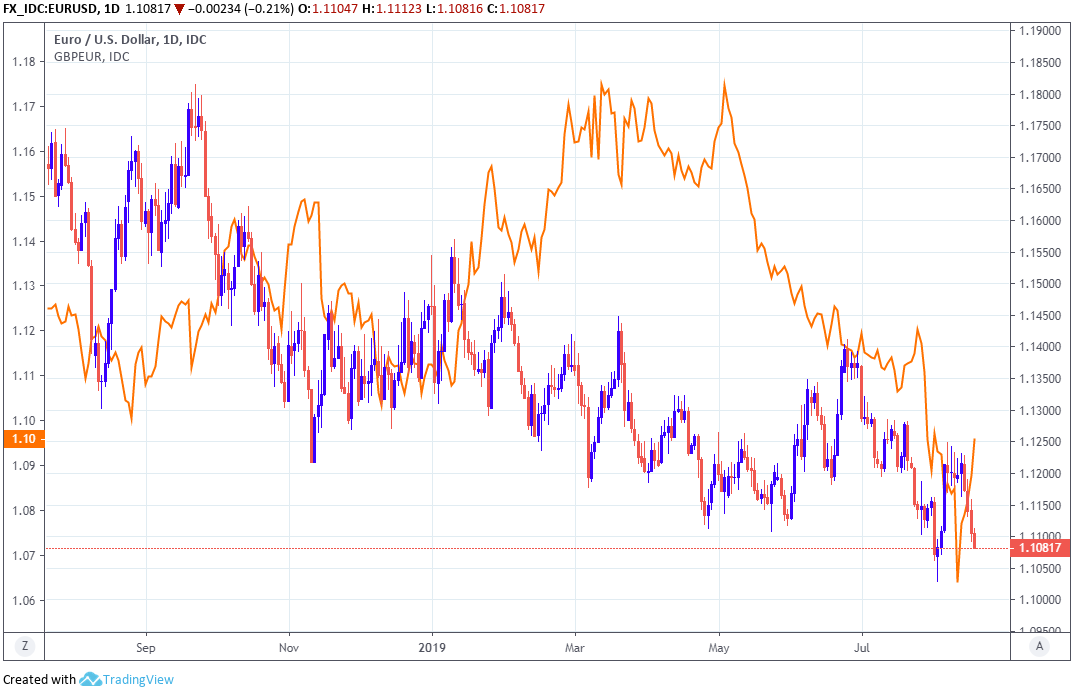 Markets slumped earlier this week after the U.S. yield curve, which represents the cost of government borrowing over maturities that range from one month to 30 years, briefly became downward sloping, in a process known as inversion. This was after the yield on the 10-year government bond fell below that of the two-year bond, which is rare because longer term debts are normally perceived as more risky that short-term ones and so often offer a higher yield.

Inverted yield curves are widely believed to be harbingers of recession further down the line, although the U.S. inversion came in the wake of Chinese industrial production and retail sales figures that suggested the world's largest economy struggled during July. The curve then inverted again during the London morning when the German economy was revealed to have contracted during the recent quarter, for a second time in the last year.

Chinese and Eurozone growth is weakening amid the U.S.-China trade war, which has hurt the export side of both economies. China is a significant market for German car manufacturers, but the world's second largest economy has been under relentless pressure from President Donald Trump's trade tariffs.