- EUR tipped as a sell at UBS, seen under pressure up ahead.

The Euro ceded ground to a resurgent Dollar Friday but is in line for more losses in the months ahead, according to multiple analysts, who're re-examining their forecasts after the European Central Bank (ECB) suggested a fresh program of interest rate cuts and quantitative easing (QE) is on the way.

Europe's single currency slipped lower in the face of a recovering Dollar Friday as financial markets responded to better-than-expected GDP figures that have prompted investors to reconsider their expectations for a large Federal Reserve interest rate cut next week. But the source of losses anticipated for the months ahead is homegrown.

"The dollar inched higher against most other G10 currencies again on Friday, something that we expect to continue until next year," says Oliver Jones at Capital Economics. "Two key factors explain the currency moves of the past month or so. The first, and most relevant as far as developed market currencies are concerned, is changes in investors’ expectations for interest rates." 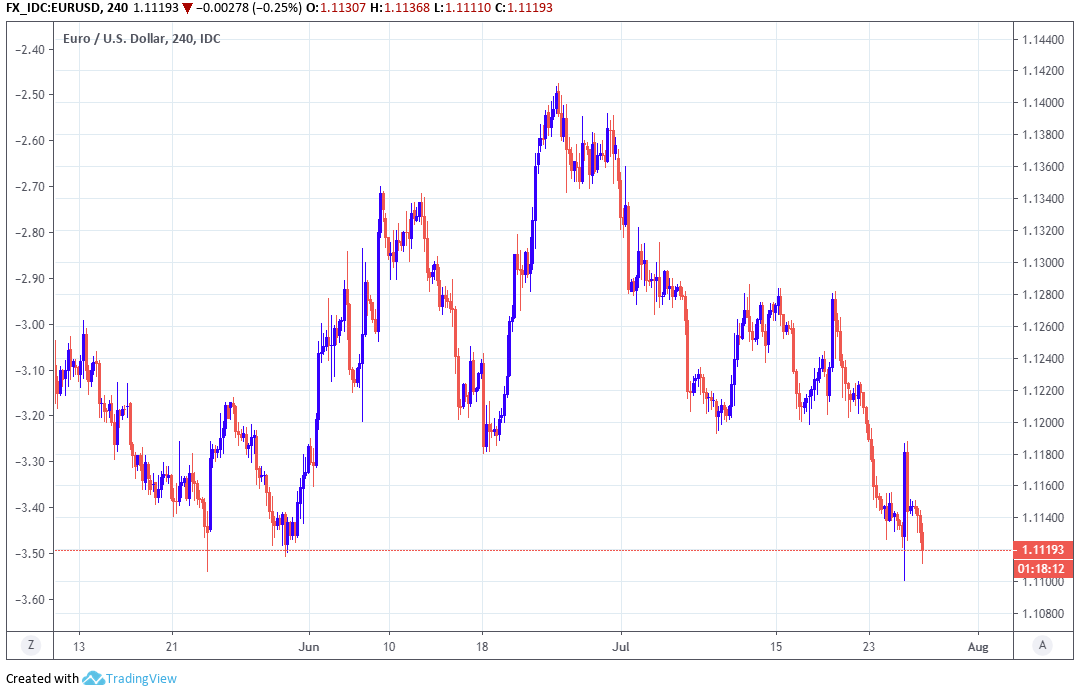 ECB President Mario Draghi said Thursday the bank has tasked staff with finding a way for it to cut its deposit rate further below zero without harming the profitability of commercial banks. It also asked them to begin considering "options for the size and composition" of a new quantitative easing program.

These moves will put downward pressure on already-low, if not negative, yields of Eurozone government debts and reduce their attractiveness to investors in the process. As a result some investors could sell their bonds while others might simply avoid new investments in the Euro area, although would put pressure on the single currency.

If not matched by changes in yields available in the U.S. bond market, the gap between yields on either side of the Atlantic will widen and make the Dollar more attractive. Especially as the U.S. economy is still performing better than many had expected, while the Eurozone's underperformance has continued.

"Near-term projections for rates have stabilised in the US after earlier sharp falls," Jones writes, in a note to clients. "But rate expectations have continued to decline elsewhere, particularly in Europe, where the latest data have been poor and investors correctly anticipated the ECB’s dovish shift yesterday. This helps to explain why virtually all European currencies have struggled." 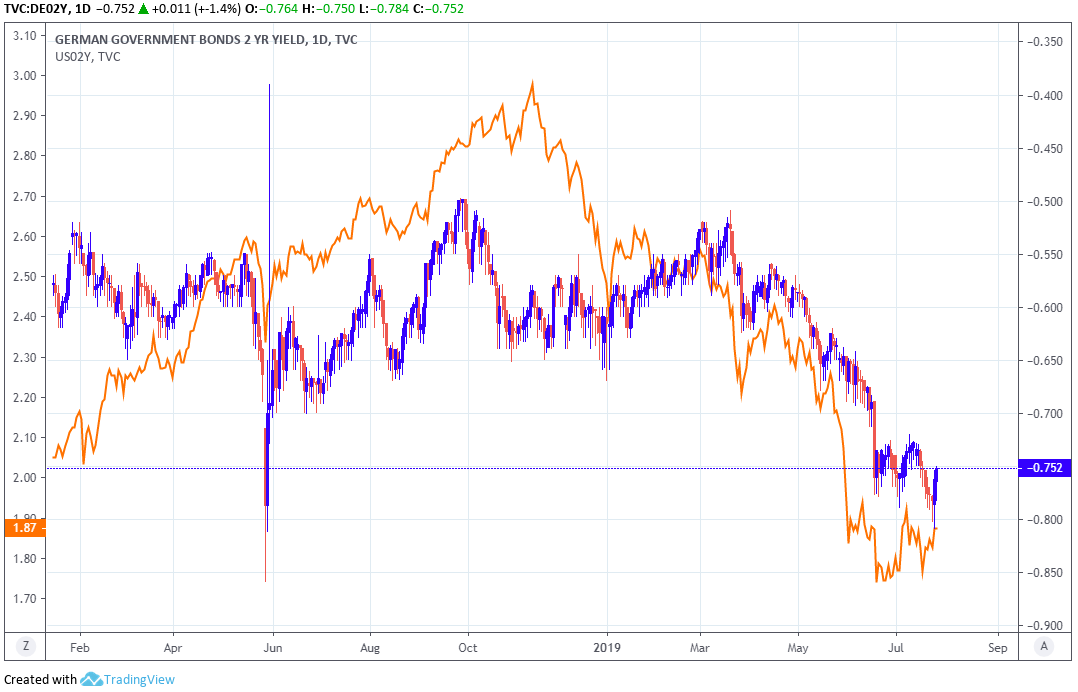 Financial markets are betting the Federal Reserve will cut its interest rate by at least 25 basis points, to 2.25%, next Wednesday and that it'll cut again in September. But they also anticipate 10 basis points of rate cuts from the ECB and a bond-buying program that will force down yields directly.

"The first Q2 Eurozone GDP estimate on Wednesday will inform us about the severity of the slowdown that the region went through at the end of Q2 and into Q3," says Gaétan Peroux, a strategist at UBS. "The euro is likely to remain under pressure from the ECB, and we prefer to sell the euro against the Norwegian krone, where we think the Norges Bank will keep raising rates and would feel comfortable with a stronger currency."

Mario Draghi told reporters Thursday the ECB still sees signs of strength in the Eurozone economy, particularly in the services sector, but he also admitted that the economic outlook is getting "worse and worse". He singled out manufacturing and those countries where manufacturing is important for growth a suffering the greatest.

This was right after the influential Institute for Economic Research warned on the outlook for the German economy, which is expected to have slowed in the second and third quarters, alongside the Eurozone. This came after IHS Markit PMI data suggested the ongoing recession in the German manufacturing sector deepened in July 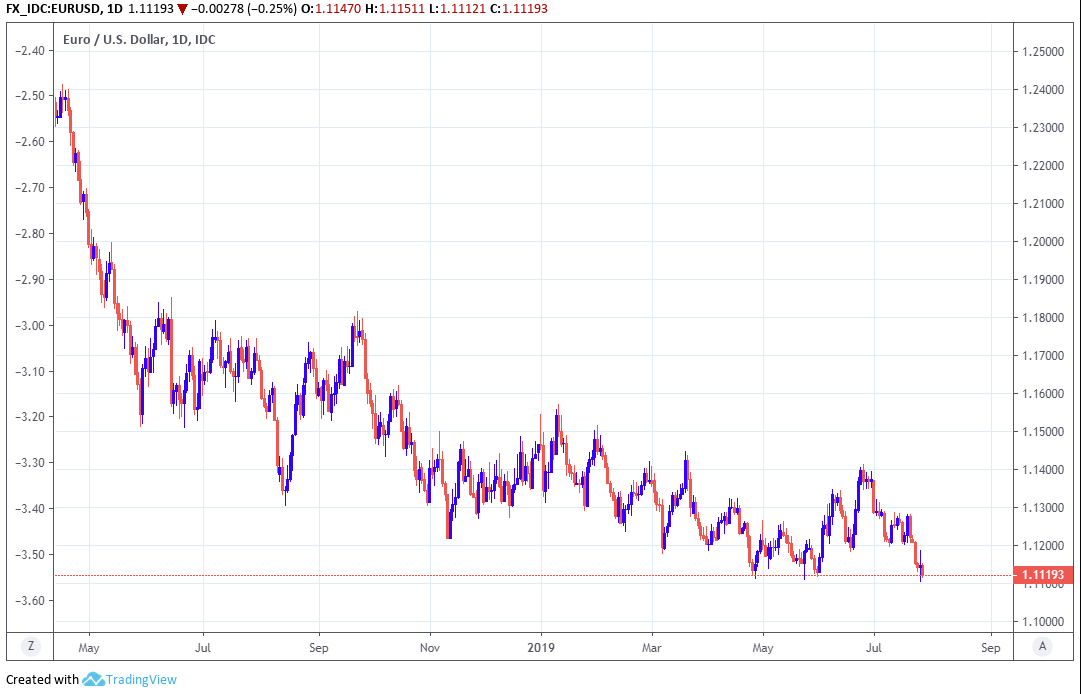 Eurozone GDP growth fell from 2.3% to 1.8% in 2018 and the European Commission forecasts it'll decline to 1.2% this year. Those developments have come at a bad time for the ECB, which has been battling unsuccssfully against below-target inflation for years now.

"The ECB has signalled strongly that a package of easing measures is likely to be announced in September, and that loose policy is set to remain in place for longer. It should keep downward pressure on eurozone yields and the euro," says Lee Hardman, a currency analyst at MUFG.

Eurozone inflation has fallen from 1.4% in January, to 1.3% in June this year while the more important 'core' measure of inflation has remained at 1.1%. The main inflation rate is down from 1.8% in January 2018 and market expectations of inflation in five years time have recently fallen to a new record low.

All those numbers are a long way off the target the ECB needs them to meet, which is "close to, but below 2%". Inflation is sensitive to many things but, notably, growth is an important influence over price pressures and the economy is slowing rapidly.

"EUR/USD attempted and failed to break below the 1.1100 during the ECB press conference. A decisive break below would the door for a potential retest and levels below 1.1000," Hardman says. "We plan to lower our EUR/USD forecasts for the year ahead in our next monthly FX Outlook." 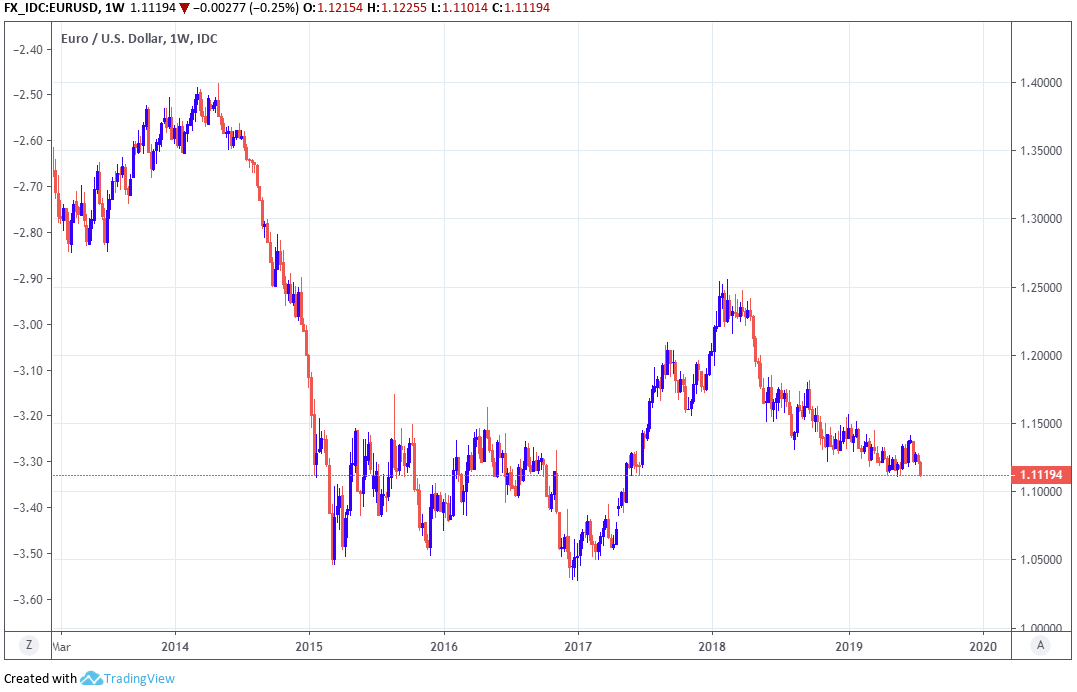 The ECB has already cut the rate it charges commercial banks to park money with it to -0.4%, reduced its lending rate to zero and spent up to €80 bn per month over the three years ending in December 2018 as part of an effort to lift inflation by stimulating economic growth. It bought European bonds en masse, forcing down their yields as well as borrowing costs for some companies.

The prospect of more ECB rate cuts and quantitative easing should have already damaged the Euro. After all, it fell from 1.33 against the Dollar in August 2014 to just 1.12 in January 2015, which was when the ECB first unveiled its earlier stimulus packaged following months of speculation.

However, it's not clear what the latest stimulus will mean for the single currency in the short-term because of uncertainty over what the Federal Reserve might do this summer. With an interest rate of 2.5%, The Fed has much more scope to cut borrowing costs than the ECB does.

MUFG currently forecasts a Euro-to-Dollar rate of 1.14 at the end of September and 1.16 by year-end but both these projections could now change during the weeks ahead.

However, the Japanese lender, which is also the world's fifth largest bank and a significant currency dealer, is not alone because the ING team are also eyeing their forecasts. The European lender currently projects a Euro-to-Dollar rate of 1.12 at the end of September and 1.15 by year-end.

"Unless the Fed embarks on more pronounced easing vs what is priced in for this year (more than two and half 25bp cuts vs our call for two 25bp cuts) it is hard to see EUR/USD embarking on a persistent and meaningful uptrend. In our view, risk to EUR/USD has re skewed towards 1.10 rather than 1.15 over the course of summer," says Petr Krpata, a strategist at ING.