The risk of a recession in Germany by the end of the third-quarter 2019 grew following the release of German ifo data for July.

The ifo - which measures business sentiment in Europe's largest economy - read at 95.7, well below expectations for a reading of 97.1, and down on the previous month's reading of 97.5.

Ifo President Clemens Fuest said the German economy was navigating troubled waters as companies were less satisfied with their current business situation and are also looking ahead with increased scepticism.

"The IFO survey continued to decline in July, reaching a new multi-year low. An ongoing decline in Manufacturing business sentiment, well-supported by Building Services and Trade sector pessimism, raises the risk of a recession in Germany by the end of Q3 19," says Iaroslav Shelepko, an economist with Barclays. 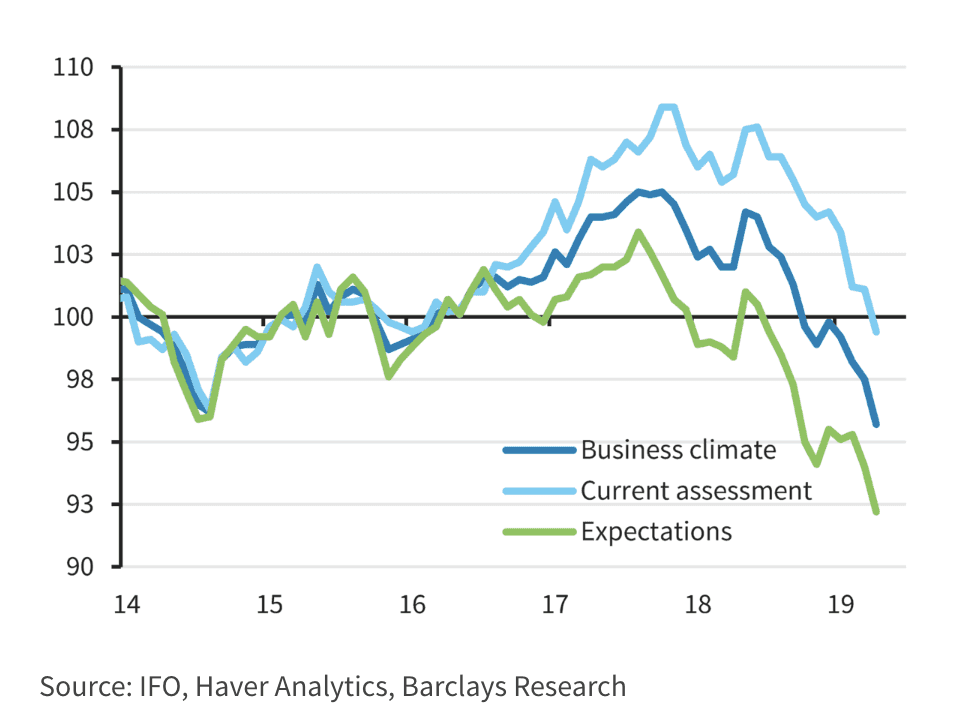 The IFO business climate balance was negative across the majority of sectors with Manufacturing, Services and Trade falling considerably while Construction recovered.

The ifo numbers come on the same day the European Central Bank is expected to release the details of their latest policy decision.

Faced with a slowing Eurozone economy, expectations are rising that the ECB will boost their monetary support programmes in an effort to underpin economic growth and raise inflation levels.

The side-effect of increased monetary stimulus is a weaker Euro, hence the combination of disappointing economic data and expectations for ECB action are likely to weigh on the single-currency going forward.

"Today's ECB meeting is set to be the key driver in FX markets. The weak German IFO reading is the latest datapoint pressuring the EUR lower. This leaves EURUSD in a precarious spot ahead of today's policy decision. While seasonal liquidity is poor and next week's FOMC may contain market reaction, we think a clean break below 1.11 could attract further selling pressure with 1.1023 as the next objective to the downside," says Ned Rumpeltin, European Head of FX Strategy at TD Securities.