- Data points to a renewed economic slowdown in the third-quarter.

- BMO Capital Markets selling EUR before and after Thursday's ECB.

The Euro was in retreat from a steady Dollar and stronger Pound Sterling Wednesday after IHS Markit surveys for July pointed to a renewed economic slowdown in the Eurozone in the third-quarter, prompting calls for the European Central Bank (ECB) to support the economy with interest rate cuts and more quantitative easing as soon as this Thursday.

The IHS manufacturing PMI fell to a 79-month low of 46.4 in July, from 47.6 in June, when financial markets had looked for it to remain unchanged.

Anything below 50 suggests contraction, it is therefore little wonder that Euro exchange rates are in retreat on the numbers:

The Pound-to-Euro exchange rate extended its short-term uptrend on the numbers to record a near-month high at 1.1207.

The Euro-to-Dollar exchange rate fell to close in on a new two-month low at 1.1139.

Meanwhile, the Eurozone services sector PMI fell from 53.6 to 53.3, in line with the market consensus.

The composite PMI, which combines the two previous surveys, fell from 52.2 to 51.5 this month suggesting that while the economy is still expanding it is close to stalling.

Exports were the weakest link again and many companies were forced to begin clearing old work backlogs to sustain output.

"The key point here really is that the slowdown in manufacturing is now so severe that it almost surely will hit the official labour market data soon, which could change the political story, re fiscal policy, too. The chart shows that GDP growth rebounded at the start of the year, but incoming data suggest that the party ended abruptly in Q2, and the PMI now suggests a further slowdown in Q3, though it has an opportunity to recover in coming months," says Claus Vistesen, chief Eurozone economist at Pantheon Macroeconomics. 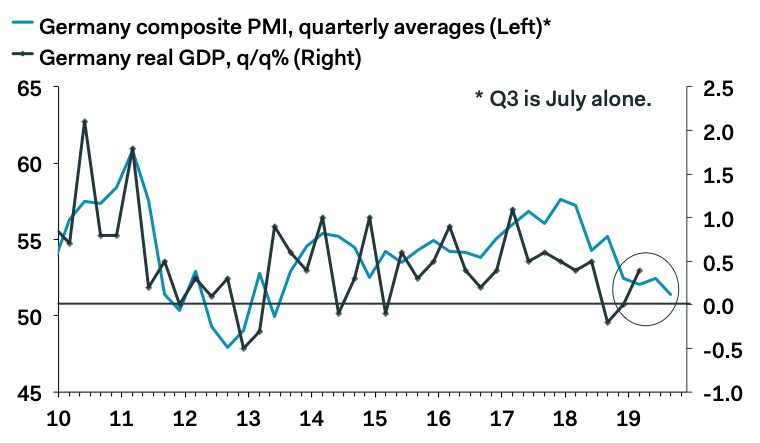 Wednesday's dire readings from the manufacturing sector were taken weeks after Presidents Donald Trump and Xi Jingping agreed in Osaka, Japan, to return to the negotiating table and avoid imposing new tariffs on each other so long as the talks draw on.

Previously, a series of tit-for-tat tariffs targeting imports from each direction had harmed the Chinese economy and dented business confidence the world over, leading to a slowdown in global growth during the second half of 2018 that's increasingly weighed on the Eurozone.

The Eurozone has strong economic links with both the Chinese and U.S. economies, but the alleviation in fears over the U.S.-China trade relationship did not come soon enough to repair the damage done to the manufacturing sector last month.

"The euro-zone Composite PMI in July bolsters the case for the ECB to loosen policy," says Jack Allen-Reynolds at Capital Economics. "The fall in the headline index from 52.2 in June to 51.5 left it below the consensus forecast and consistent with below-potential GDP growth of only about 0.2% q/q. So it will reaffirm policymakers’ desire for policy easing, and we think that they will begin by changing their forward guidance on interest rates and QE tomorrow." 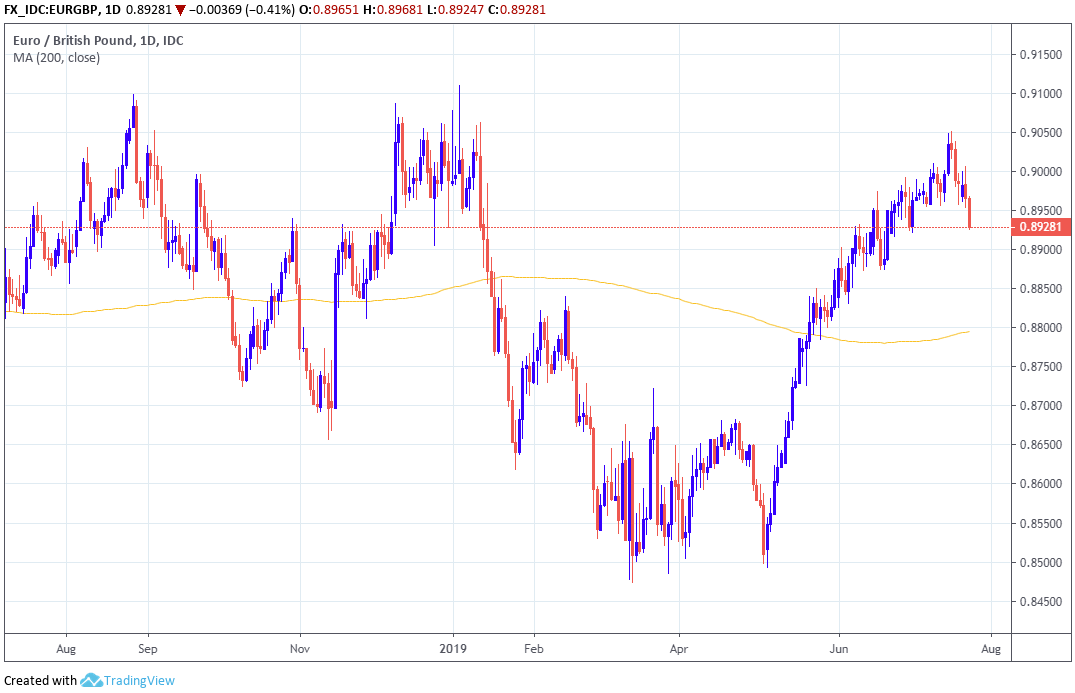 The ECB has for years now maintained a 'loose' monetary policy of record-low interest rates and money printing that is designed to prop up the Eurozone economy.

However, a side-effect of this flood of money is a weaker Euro: after all, if you increase the supply of something, its value falls.

Expectations of further action is therefore understandably weighing on the single-currency.

"The Euro has recently depreciated, as the impending easing of the ECB's monetary policy, by September at the latest, is casting its shadow ahead," says Marc-André Fongern at MAF Global Forex.

"We so far expected the ECB to wait for a deposit rate cut and a re-launch of its net asset purchases until September. Today’s PMIs raise the chance that tomorrow the ECB does more than just vowing to keep rates at “present or lower” rather than just at “present” levels," says Florian Hense, an economist at Berenberg. "Historically, the ECB has cut rates in response to similarly low readings of the PMI composite."

PMI surveys measure changes in industry activity by asking respondents to rate conditions for employment, production, new orders, prices, deliveries and inventories. A number above 50.0 indicates industry expansion while a number below is consistent with contraction. Markets care about them because they're an indicator of momentum in the economy and growth has a direct bearing on consumer price pressures, which dictate where interest rates go next.

Changes in rates impact currencies because of the influence they have over capital flows. Those flows tend to move in the direction of the most advantageous or improving returns, with a threat of lower rates normally seeing investors driven out of and deterred away from a currency.

"Global uncertainties, including the trade war and Brexit, clearly continue to burden the outlook and these uncertainties are unlikely to dissipate any time soon. Risks for the Euro-area economy remain tilted firmly to the downside," says Jan von Gerich at Nordea Markets. "We do not think today’s data were bad enough to convince the ECB to hurry with new stimulus measures and expect the actual easing package to be revealed only in September." 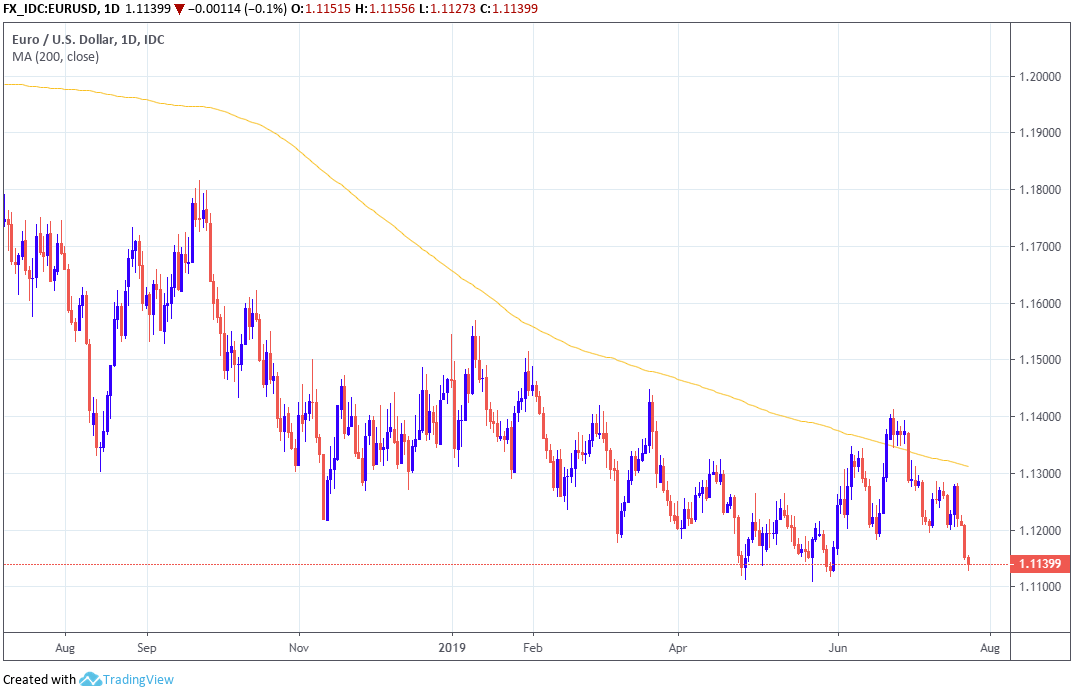 "We think the odds of a 10bps reduction this week are much higher than what is priced into the OIS curve, so at the very least we expect EURUSD offers in the 1.1250/1.1260 range," says Stephen Gallo, European head of FX strategy at BMO Capital Markets. "We recommended a short-EURUSD exposure heading into Wednesday in anticipation of levels below 1.1200 coming into view. Now that they have been achieved, we would trim the position and only look to sell again (pre-ECB) on a firm break of 1.1170."

Wednesday's data comes less than a day away from the July interest rate decision of the European Central Bank and barely more than a month after Mario Draghi, the ECB President, said the bank would announce fresh stimulus for the economy if the inflation outlook did not improve promptly. Since then the outlook for consumer price growth has darkened because expectations for the economy have softened.

Draghi specifically mentioned interest rate cuts and a fresh quantitative easing program, which is where the ECB buys European bonds in order to lower borrowing costs and stimulate growth by forcing down yields, as likely in the event of continued weakness in the inflation outlook.

Both of those would be bad for the Euro, although the single currency's exact response to either would also depend greatly on how much the U.S. Federal Reserve cuts its own rate on July 31 because the main driver of capital flows is changes in the difference between bilateral interest rates.

"A story about the prevalence of short-time work in Germany made the front page of the FT's online edition today, and we've decided to flag it. A weaker German labor market is a huge milestone. The pace of hiring in the Eurozone's largest economy has been resilient to a number of shocks including the GFC and the first Eurozone crisis, but there are more reasons to be concerned now than in the recent past," Gallo writes, in a note to clients Tuesday. "The notion that Germany's economic malaise doesn't raise the risk of a more aggressively "dovish" ECB beggars belief."