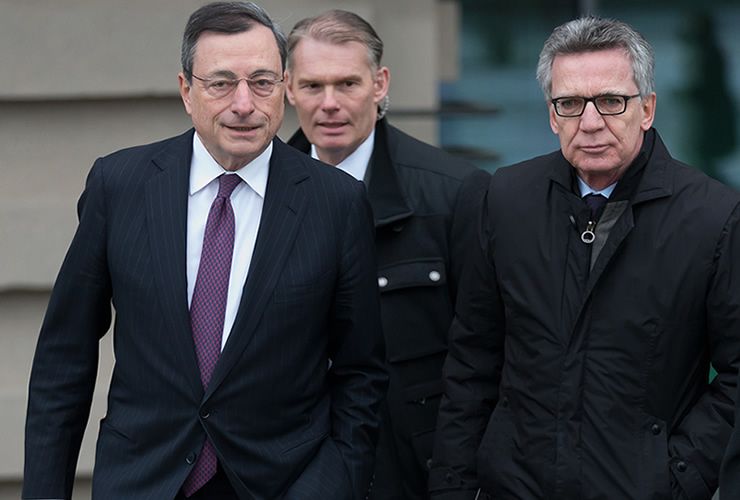 Above: ECB President Mario Draghi will be the highlight of the GBP v EUR rate's week. (C) European Central Bank.

Why this week's ECB meeting might just propel GBP/EUR to fresh multi-week highs.

Pound Sterling is enjoying a strong run against the Euro at present but the gains will surely be tested - or accelerated - later in the week when the Euro comes back into focus.

The January policy meeting of the European Central Bank will be an important event for the singe-currency as markets will find out just what ECB President Mario Draghi and his team are thinking with regards to the future of money-printing and interest rates in the Eurozone.

Already in 2018 we have seen some strong moves in the Euro owing to the ECB - one sentence in the ECB's December meeting minutes triggered a rally of nearly 3 cents in EUR/USD on Friday, January 12 when they were released.

The sentence suggested a radical change in the ECB's message about how it saw monetary policy evolving: "The language pertaining to various dimensions of the monetary policy stance and forward guidance could be revisited early in the coming year (i.e. this year)."

For those unfamiliar with central bank speak, the sentence means that the ECB is closer to officially saying when it will end its money-printing programme - also known as quantitative easing (QE), and also known by its more formal name as the asset purchase programme. (See how quantitative easing works as a stimulus to the economy in this nifty explainer from the ECB here).

From a currency perspective, our readers need to know one thing; and that is QE is negative for the Euro, so the suggestion that the ECB is closer to signalling an end to the programme is a positive.

Indeed, the strong recovery in the Euro exchange rate complex in 2017 was predicated largely on the assumption that the day when the ECB exits QE is fast approaching with various hints of such a decision being drip-fed to markets throughout the year; in short it is absolutely central to the single-currency's outlook.

The obvious question is will more hints that are supportive of the Euro happen at this week's meeting? Or will the ECB take fright of the Euro's recent surge against the Dollar and other currencies and tame expectations?

Indeed, most leading analysts suggest the later and appear to be sceptical about the ECB altering their message, or "forward guidance" as they call it, as early as the January meeting, expecting them to instead take their time and wait until March before announcing any substantial changes.

This is partly due to reports from an unnamed source within the ECB, saying there would be no changes made until March.

Almost all analysts emphasise that any changes are likely to be extremely gradual as this is a key characteristic of the ECB's new communication strategy, warning continued low core inflation remains an impediment to the ECB altering their message so soon, after it came out at only 0.9% in December.

"Only a limited time has passed since the December meeting and the latest core inflation reading was another disappointment. The ECB is unlikely to change its guidance next week. We see some downside potential for the EUR and bond yields," says Jan Von Gerich an analyst with Nordea Bank.

"We would expect Draghi to emphasise that any changes to forward guidance will only be gradual and that the sequencing (rate hikes only after net QE purchases are over) is something that won't be altered. Those expecting rate hikes at the end of this year may end up being disappointed," warns Gilles Moec, Europe Economist at Bank of America Merril Lynch.

Marco Valli, Chief European Economist at UniCredit Bank in Milan, thinks they will wait until March: "the ECB is likely to confirm both its monetary policy and its communication. Any revision to the forward guidance will probably have to wait at least until March."

A Stronger Euro Causes a Headache

There is good reason for the ECB to disappoint markets as one major concerns for policy-makers will be the value of the Euro exchange rate - an issue that could spring a surprise.

The Euro has appreciated substantially, especially versus the US Dollar  - even in the short time since the December meeting - and it has now reached a level where it has started to raise concerns that it itself could become a new headwind to inflation, which the ECB is trying its hardest to raise to its target at just below 2.0%.

A stronger Euro makes imports cheaper which exerts a downward effect on inflation, which is the exact opposite of what the ECB wants to achieve.

Three members of the ECB have already expressed concerns about the appreciating Euro this week: the Bank of France governor Villeroy, the ECB Vice President Constancio and Austria's central bank head Nowotny.

Villerory said the Euro's rise was a "source of uncertainty and needed monitoring carefully", Nowotny said it should be "observed" and Constancio was the most outright negative, saying that its recent moves "did not reflect fundamentals".

If the ECB wanted to push the Euro down they could decide to try to 'talk it down' at next week's meeting, and there has been speculation this might happen.

"Draghi should acknowledge that the Euro appreciation reflects strong economic growth in the euro area," says Alan Lemangnen at Natixis. "But on the other hand, he is likely to reiterate the well-known line of argument that, despite not being a policy objective, the exchange rate is a key element for the inflation outlook and that the ECB stands ready to respond in case of any unwarranted appreciation of the currency."

This is therefore a key negative risk for the Euro and therefore is a source of upside potential for the Pound-to-Euro exchange rate.

Analysts at Bank of America and Unicredit argue the ECB will not talk down the Euro because the huge moves in EUR/USD are not representative of the value of the Euro across a wider spectrum of counterparts.

They both note how the actual Euro index - which is the value of the Euro calculated against a broad trade-weighted index (TWI) or basket of counterparts - is not really that much higher than it was at the December meeting.

The TWI has only risen 2.0% above the level assumed by the ECB in their macroeconomic projections in December- and only 1.0% higher than the actual TWI on the day of the meeting.

The EUR/USD, in comparison, is much higher at 1.2240 compared to the assumption used by the ECB in their projections in December of 1.1700, but it is not indicative.

There are also wide differences between competing perspectives within the ECB governing council in regards to the exchange rate.

The French, for example, have a unique set of conditions in France (low inflation and high corporate leverage) which makes them favour a weaker Euro and lower interest rates, which may explain why Villeroy was commented as he did; Germany, on the other hand, can tolerate a much higher Euro.

The differences could lead to a lack of consensus in the governing council on the question of the stronger Euro, which will hamper communication.

EUR/USD has tended to be higher on previous occasions when Draghi discussed it as overtly overpriced, such as when it was at 1.36 in 2013 and Draghi said it should be nearer 1.10 to help the weaker members of the Eurozone to recover - but that was at the height of the Eurozone sovereign debt crisis.

What Does this Mean for the Pound-to-Euro Rate?

The Pound to Euro is idiosyncratic amongst Euro pairs as it has been one the least reflective of the Euro's rise in recent weeks. This is in part thanks to the Pound's recent good run which has resulted largely from traders betting Brexit won't be the train-smash they had initially assumed.

GBP/EUR closed at 1.1266 when the ECB minutes were released last Friday and currently trades at 1.1328 - not much higher.

In fact, the exchange rate has traded in a sideways range over December and January.

It is therefore difficult to see much volatility coming from the meeting next week given this track record of resolute sideways trade. However, from a purely technical view we would favour more upside from the current position, as the pair continues climbing within its range. 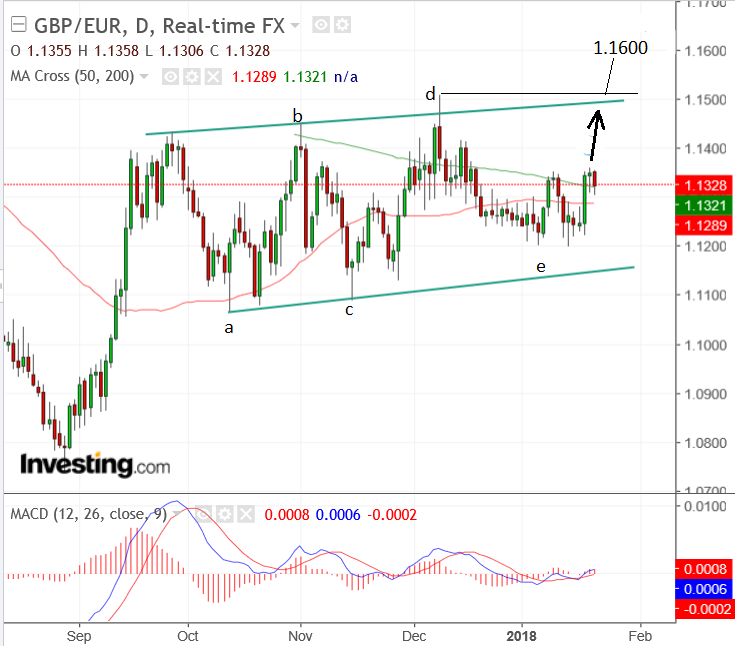 Therefore, a dovish message from Draghi - as we suspect is coming - or mention of concern about the strength of the Euro in the minutes, could aid Sterling higher.

Both the look and feel of the chart biases us to expecting more upside and the previous rally before the range formed, as well as marginally higher lows of the range as it as unfolded and gently ascended.

Thus using our charts as a guide we expect the Pound to strengthen versus the Euro next week, and therefore favour a risk of the ECB adopting a more dovish tone, with Draghi possibly making light of or dismissing the mention of a change of message in the minutes.