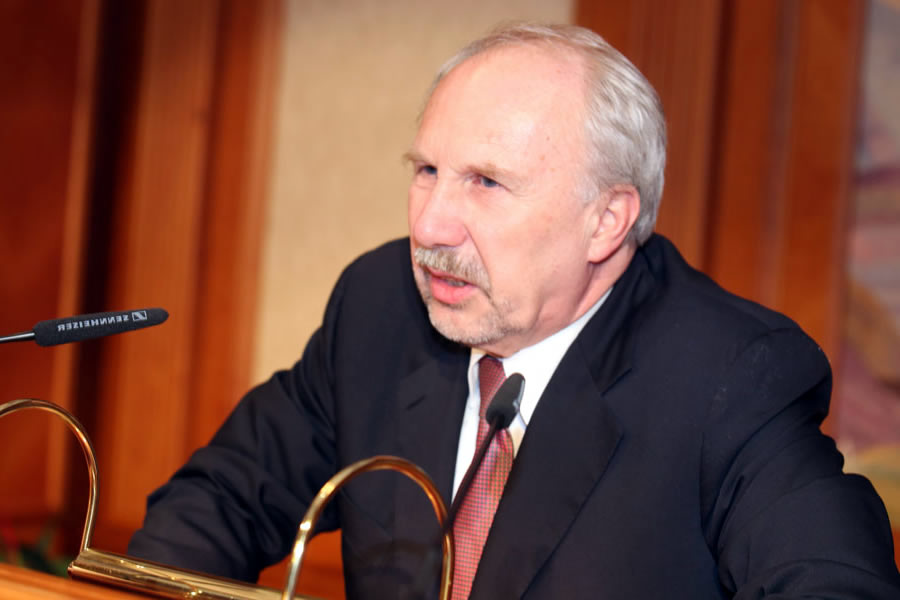 The Euro is off its highs of the day after losing ground following comments from Ewald Nowotny, member of the Governing Council of the European Central Bank and President of Austria's central bank, that suggested the strengthening Euro needed to be watched carefully, implying concerns about it getting too strong.

Already persistently low inflation in the Eurozone would not be helped by a stronger Euro which would cheapen foreign imported goods.

Nowotny said, "the Euro must be observed," whilst speaking at a Euromoney CCE Conference in Vienna.

His comments support evidence from analysts that the market may be getting a little ahead of itself in relation to expecting the ECB to dismantle its QE programme of stimulus, money-printing, and bond-buying earlier than had previously been expected.

Market expectations have seen the Euro has touch fresh three year highs against the US Dollar while the yield being delivered by European sovereign debt is rising, all of which effectively places constraints on the Eurozone economy.

Indeed, Nowotny's comments follow those of two other major European central bankers who have also discussed the appreciating Euro over the last 24 hours, Francois Villeroy and Vitor Constancio.

Banque de France chief Villeroy said, "the recent Euro increase is a source of uncertainty," and Constancio, who is Vice-President of the ECB, said, "I am concerned about sudden movements which don't reflect changes in fundamentals. Looking at fundamentals, inflation declined slightly in December."

All three are members of the ECB governing council, which meeds periodically to decide monetary policy in the Eurozone.

Their comments reflect investor concerns about how the rising exchange rate could hamper attempts to raise inflation.

Recent research from Nordea Bank showed how the ECB has consistently attempted to use verbal intervention to push the Euro down when it has become too expensive.

They said that the 5.0% rise in the Euro since it was at 1.18 in December had probably lead to a concomitant 0.2% drop in the core inflation rate.

"A further 5% rise in EUR/USD would lead to 0.5% point lower inflation in 2019 versus the baseline," said Nordea bank's analyst Andreas Steno Larsen.

The strengthening Euro will likely dampen the effect of prices rises in the Eurozone, making the ECB's target for inflation at 2.0% more difficult to achieve. "Any revival in domestic price pressures could count for little if the EUR were to wade through the vacuum of technical space that now lies before it," says BNY Mellon's Mellor.

We see the intervention of the ECB in matters of the Euro exchange rate as being a key theme for markets to consider over coming weeks.