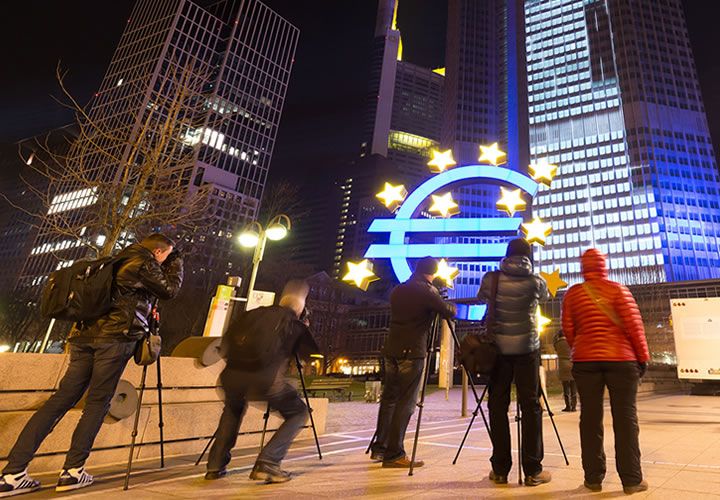 Below-target inflation data out of the Eurozone and continued currency strength could undermine market hopes of an end to quantitative easing at the ECB in 2018, placing the Euro at risk.

The Euro could be in for a bout of the Blues if strategists are right and the European Central Bank responds to the continued weakness of Eurozone inflation with renewed dovish tones during the weeks ahead.

December’s inflation numbers, released last week, left a lot to be desired among those hoping to see the common currency break above recent peaks to new multi-year highs.

The impact of the data appears to have fed into Monday's trade in the single currency - the Euro fell against the Pound Sterling and US Dollar , leaving the Euro-to-Dollar rate quoted 0.42% lower at 1.1973 and the Pound-to-Euro rate marched 0.34% higher to test 1.1314.

Headline inflation fell another 10 basis points when it dropped to 1.4% in December, according to figures from Eurostat. The more important core-inflation, which removes the volatile food and energy commodity items from the basket, remained static at 0.9%.

Economists had expected a decline in the headline measure of inflation but forecast a 10 basis point increase in core inflation, to 1%, partly as a result of a strengthening economic recovery on the continent.

“0.9% yoy the core inflation rate in the euro zone was disappointingly weak and that caused EUR appreciation pressure to evaporate for now. As long as the core rate of inflation does not rise on a sustainable basis, ECB rate hikes remain dreams of the future,” says Esther Reichelt, an analyst at Commerzbank.

The numbers leave the ECB a long way off from its 2% target at the headline level and a country mile away if one takes the core inflation measure as a more accurate representation of true underlying price pressures.

Now, some strategists say the European Central Bank has even more of an incentive to be patient in its exit from quantitative easing. An end to QE must come before any eventual rise in interest rates, which are the biggest fundamental driver of exchange rates.

“Our economists expect that...the ECB will be forced to extend its QE programme once again in view of sustainably low inflation levels,” says Ulrich Leuchtmann, head of FX strategy at Commerzbank.

It wasn’t until October 2017 that the ECB announced the first meaningful reduction to its intervention in bond markets.

That reduction takes effect this month, when the ECB will cut the amount of its monthly bond purchases in half, to €30 billion with the reduced rate of bond buying will continue until “September 2018 or beyond.”

The ECB has been buying €60 billion of government and corporate bonds per month ever since early 2015, with the ultimate aim of spurring inflation, which had been weighed down by years of post-crisis stagnation and a collapse in commodity prices.

Quantitative easing compresses market interest rates (bond yields) which, in theory, lowers borrowing costs for businesses and households in the real economy. It is thought that lower borrowing costs incentivises investment and spending which, in turn, stimulates economic growth and inflation.

“The fact that aggregate Eurozone inflation has yet to respond to this improved performance [in the economy] will stay the ECB’s hand,” says Neil Mellor, a senior currency strategist at BNY Mellon. “As we have argued, an inflation overshoot must be Mr Draghi’s preferred risk when growth has been bought at such cost.“

The ECB has gone far further with its own extraordinary monetary policy than any of the Western world’s other central banks, injecting new money equivalent to 40% of Eurozone GDP into the financial system over the last two years.

This is nearly twice what the Federal Reserve did during its own quantitative easing years and the US central bank, despite having two full years of so called “normalisation” under its belt, is yet to actually shrink its balance sheet.

The scale of the ECB’s balance sheet combined with the length of time that has elapsed without the Federal Reserve being able to lighten its own load highlights and underlines the gargantuan task ahead of Mario Draghi and the governing council.

“Moreover, equanimity would be better served by a stronger consensus than that which made for a somewhat fraught October Council meeting – an important consideration, perhaps, in view of what is at stake,” adds Mellor.

However, currency markets could add further to the central bank's headache. Traders began to bet on the scaling down of QE some three months before ECB chief Mario Draghi announced the move in October, which helped to fuel a double digit rise in the common currency for 2017.

Now, with the continental economy thought to have seen its best year in more than a decade, much of the analyst community is looking ahead into 2018, eagerly anticipating the full winding up of the ECB’s bond buying and further gains for the Euro.

However, currency strength counteracts inflation by making imported goods cheaper to buy and, to a central bank that has pumped trillions of Euros into the financial system in order to stir price pressures, it is almost certain to be unwelcome.

If the currency continues to strengthen in 2018 and the above strategists are right that the ECB is likely to stay the course on, or even extend, QE once again then any such bets may prove to have been premature. And counterproductive.

Euro buyers can look to the minutes from the latest European Central Bank meeting, due for release this Thursday, 11 January, at 12:30 pm London time, for clues as to how policy makers have interpreted the latest inflation numbers.